Up for some fantastic game that will take you back some 70 years BC? Spartacus: Gladiator of Rome is an online slot game by WMS Gaming which is inspired by the mighty Ancient Rome Empire where your goal is to become one mighty gladiator and take home the best possible prizes that the game offers. Out of the plethora of games that are made and inspired by the happenings of the Ancient Empires, especially the force of Rome, this one seems to stand out because of several reasons. 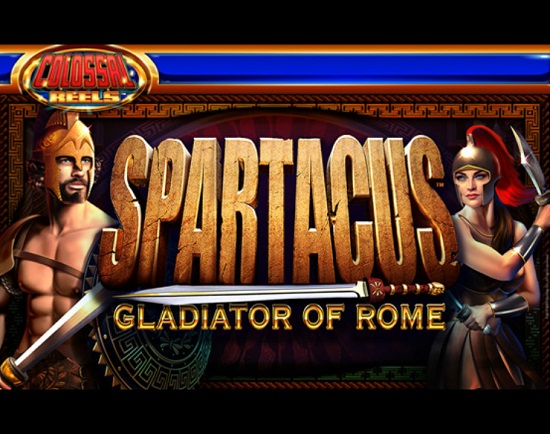 When you first enter this WMS Gaming slot, you will realize that there are two sets of reels that you can spin. The standard one placed on the left-hand side with a 5x4 grid, and an extra one with even 12 rows that seems to spin exactly like the other one. You would few dozen spins to understand what’s going on, and this is why the demo version is useful. The game contains five reels and astonishing 10 paylines across both sets of reels. It can be played from £0.10 all the way up to £500.00, which will make the players that are here for the adrenaline rush and super-fast big bucks really happy. All you need to do is hit the “Bet Max” button and it will set the denomination, as well as the coin value to the max, and it will also activate all of the paylines. On contrary, if you want to enjoy the reels of this fantastic game while giving your index finger a rest, try the “Auto Play” feature, as it will spin the reels automatically, with you previously setting the denomination and the number of spins.

The several bonus features in combination with the perfect design that this game offers are the reason why you should play it, but you must definitely try the demo version beforehand.

The demo version of the game is exactly the same as the original one, with one exception – you don’t need to play with your money, but with credits that the site gives. This is a fantastic idea because the reels of Spartacus: Gladiator of Rome are a bit tricky and it takes several minutes of playing so that you can understand how the game functions, especially in the bonus features where the symbols transfer from the left to the right set of reels. In Spartacus: Gladiator of Rome demo you'd be able to get familiar with the game features in a best way.

You won’t be able to deposit anything while playing the game, and also you won’t be able to win anything, as you are not investing any money. As soon as you feel ready to play the original game, find it on Slotswise and choose a casino to play at, claim the bonuses and enjoy the prizes.

Claim your bonus package and Spin to Win the Spartacus slot at any of our top level online casinos.