Enjoy one of the most popular sci-fi television franchises ever as you play Star Trek Red Alert and spin to win big cash sums alongside Spock and co. WMS Gaming bring you this incredible slot, based on the show, featuring five reels and 20 paylines. Play Star Trek Red Alert and get your hands on cash prizes, multipliers and free spins while venturing in outer space alongside your favourite Klingon characters. 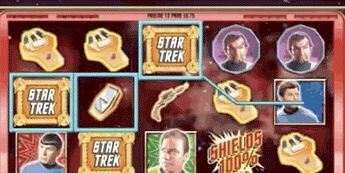 Enjoy one of the most popular sci-fi television franchises ever as you play Star Trek Red Alert slots.And spin to win big cash sums alongside Spock and co. WMS Gaming brings you this incredible slot, based on the show, featuring five reels and 20 paylines.

Play Star Trek Red Alert slot and get your hands on cash prizes, multipliers and free spins while venturing into outer space alongside your favourite Klingon characters.

You wouldn’t be blamed for thinking the graphics on Star Trek Red Alert slots are quite old-fashioned. But when you look at it, the TV series is quite old too. This game is a Star Trek Enterprise slot machine and it completely reflects the spirit and the style of one of the top series in history.

Despite this, the game is well designed in the sense that everything is very much on-theme, including the symbols, the reels, the buttons and background. You get the feeling that you’re constantly flying through space as you watch stars shoot towards you from behind the reels.

The symbols themselves are a mixture of nice illustrations and real images from the Star Trek franchise. Those of lower value are represented by a phaser, a tricorder, a communicator and a Klingon ship, as well as a Klingon.

The Star Trek Red Alert slots higher value symbols include Scotty, Spock and Captain Kirk. Plus, the standard reel symbol with the highest value is a set of Klingon rank badges, in orange, yellow and green.

There’s also a Feature symbol that helps to trigger an additional round within the game, as well as a wild that’s represented by ‘Star Trek.

This can be done by the click of a button beneath the reels. There are different buttons at the bottom of the screen, each one representing a price to spin with. You can play with an amount between 35p and £105 per spin, with each choice going up in increments of 35p.

Because all you need to do is click that button, the reels will spin. There’s also an Autoplay feature and if you choose to use it, the reels will continue to spin consecutively until you click again to stop it.

Deciding to play the free play of any online slot is always a smart thing to do because you can familiarize yourself with the game. By playing the free play version you can try the different options of the game, such as the game’s scatter and bonus symbols, and see how frequently the bonus features get triggered. Once you feel confident enough and gained sufficient experience, you should move on to the real version of Star Trek Red Alert slot.

When you play Star Trek Red Alert slots, you’ll need to land at least three symbols in a combination to receive a winning payout. As mentioned earlier, the value of the symbols do vary, so your payout will be dependent on which symbol it is that you land, as well as how many.

The Star Trek Red Alert slot game’s highest value standard symbol is the rank badges, paying out 150x your coin size when five are landed across an active payline.

Plus, with the help of the Star Trek wild symbol, you can also land winning combinations. The wild will substitute for all others, except the Shields 100% symbol, in order to fit in and help create a winning combo.

Aside from landing standard symbols, you can also secure winning payouts within the bonus features that are on offer throughout the game too. This means you have a chance of getting cash sums, eventually, after landing the bonus symbols.

If you are looking for Star Trek slots free coins, it is in the bonus games that you will find them. This game features quite a few bonus features, more than most other WMS slots, even compared to most other online slots in general.

This particular feature is randomly awarded after each winning combination and there are four possible options:

Medals are awarded each time you trigger a bonus feature. This means that more episodes are available, depending on how many you get. It does take time to collect medals, but the game will save your progress so you can stop playing and carry on where you left off, once you return.

When you land three or more of the Feature symbols anywhere on the reels, you will trigger this bonus feature. Every time you create a winning combination, the Enterprise will blast an enemy ship, uncovering a multiplier for your cash prize.

When you don’t land a winning combination after a spin, one of five shields is destroyed and when no more are left, you’ll need to select one of two communication channels, revealing one of the following options:

Overall, Star Trek Red Alert slot is a great slot game with plenty of additional features to enjoy. No stone is left unturned in WMS Gaming’s attempt to accurately reflect the television franchise in a fun and exciting way, for the slots scene.

You can get your hands on free spins and multipliers, as well as cash sums. Plus, no matter what your budget is, this slot will cater to your needs, suiting those that want to play with a little bit less and high rollers.

The design, despite being slightly outdated as mentioned, is on-theme, taking into account various parts of the franchise. You can play Star Trek Red Alert to spin and win, landing your favourite characters along the way for cash sums.

Play Star Trek Red Alert slots today and win big. Don’t forget to claim your free spins! And you don’t need to be looking for a Star Trek slot machine for sale, you can play online at one of the websites featured on SlotsWise.

Star Trek: The Next Generation