Step into the world of voodoo with the extravagant Baron Samedi slots from Yggdrasil. The story revolves around the Baron Samedi himself. He is a loa of the dead, a mischief-maker and the man who cannot die. Loa are the spirits of Haitian Vodou and Louisiana Voodoo and unlike gods, saints or angels, they are not prayed to but served.

There are many different loa, each with their own unique personality traits, sacred rhythms, dances, songs, ritual symbols and specific modes of service. For example, Damballa is considered one of the most important. He is the father of the sky and creator of all life, ruling the mind, the intellect and cosmic balance. Papa Legba is another essential loa who acts as a link between the loa and humanity and is believed to speak all human languages.

Baron Samedi is a video slot with five reels, three rows and 25 paylines. It is playable on all devices between €0.25 and €125. It features 36 collectable features, including wilds, multipliers, guaranteed win lines, stacks and mystery symbols. The reels spin on a wood and metal tray decorated with bones, alcohol, cigars, candles and dice; the row above the reels contains cards which we’ll explain a bit later down the review.

The high value symbols in Baron Samedi slots include the Baron, his wife Maman Brigitte and two voodoo dolls; gems of red, green, blue and purple make up the lower values.

The animal skull is wild and it will substitute for all others to help make winning matches except for the skull bonus symbol.

How To Play Baron Samedi Slots

Starting from the bottom left corner, you can see the number of lines on Baron Samedi slots. This cannot be changed, but right beside it there’s the coin value which can be adjusted by clicking on the ‘+/-‘ buttons on each side. You can check your current coin/cash bet on the next box, and right next to it there’s the ‘Max Bet’ button for those times when you’re feeling particularly lucky. On the right, the two boxes display your wins and your balance state.

Once you’re all set, click the purple Play button to start the reels, or use the Autoplay feature which allows you to choose the number of times you wish the reels to spin automatically and without interruption.

How To Win Baron Samedi Slots

The most valuable symbol is the Baron himself, awarding 120 coins for landing five on a full payline. Next is the Baroness which is worth 115 coins for five-of-a-kind combination. Then, you have the male voodoo doll which pays 105 coins and the female doll – five of which will award you with 100 coins.

As none of the symbols appears stacked on the reels in normal mode, players are heavily dependent on the feature card to generate wins. Let’s explain more about them:

The game comes with a set of 36 collectable cards, each representing a feature. Furthermore, each card is ranked in strength from 1 to 4 – the higher the rank, the stronger the card: 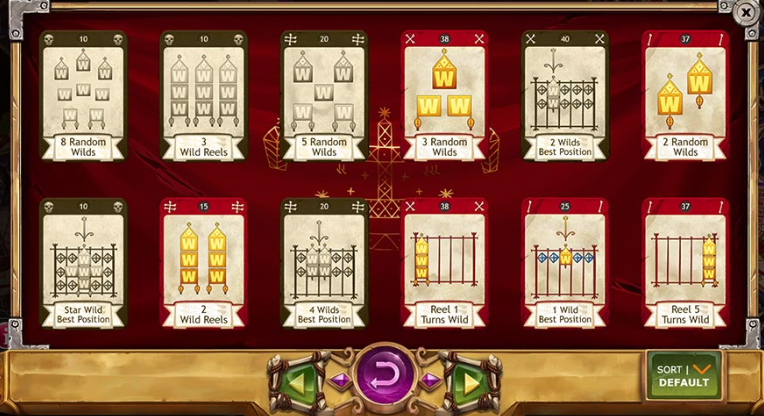 Trigger this by landing three, four or five of the skulls anywhere in view for which you’ll receive 7, 12 or 15 free spins respectively; on each spin you’ll get three more cards and their associated features which are then added to your collection.

If a card collection is completed then three extra spins are awarded with that card locked in the first card position above the reels.

Baron Samedi is a slot with a clever bonus feature you probably haven’t seen before; it ties in well to the subject matter and it extends the free spins round in an imaginative way. The graphics and sound effects are also great and there’s a nice, high RTP of 97.00%.

Despite its complex nature, Baron Samedi slots is very well executed. With all the various collectable features there is much to explore, and the cumulative benefits are both engaging and entertaining. Overall, it’s a brilliant and well-balanced slot from Yggdrasil gaming that will certainly appeal to the curious side of every player.

So seize the moment, mortal, and let the Baron’s magic help you make feature combos unseen in the realm of the living! Give Baron Samedi slots a try and have fun with the all-mighty spirit lord of the dead!