Another superbly designed slot enriches Yggdrasil’s game portfolio. The Golden Gorgon slot, whose background story comes from Greek mythology, isn’t very rich in features. However, the ones available can of course have a significant impact on the possible winnings. This is a 5-reel slot that can be an excellent choice if you like mythical elements combined with a clear design. 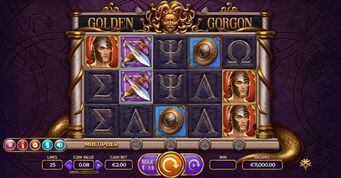 The Golden Gorgon slot can be entertaining due to the respin feature kind of triggering. There are no Gorgen Gorgen free spins, but their absence isn’t so noticeable due to this feature, while multipliers spice up the gameplay even more. Keep reading our Golden Gorgon to expand your knowledge of the gameplay.

Yggdrasil did a good job delivering this mythological-like slot. They dived into Greek literature to revive a Gorgon. This time the point is to defeat the hairy Golden Gorgon with hair made of living snakes. There are 25 ways in which you can win the game.

Multipliers come after you trigger a respin. It is the respins that give a boost to the game. Prizes won in the game can be worth up to 2,502x your bet. Of course, triggering its bonus features has a significant impact on the potential winnings. This 5-reel slot has 3 rows.

Even though there is not much to comment on the background design, we do have great words about the reel’s outlook. The Golden Gorgon’s head is placed on the top of the reels. They are surrounded by the pillars of a building that looks like the Patreon, a key landmark of early Western civilization. Two golden snakes wrap the pillars. 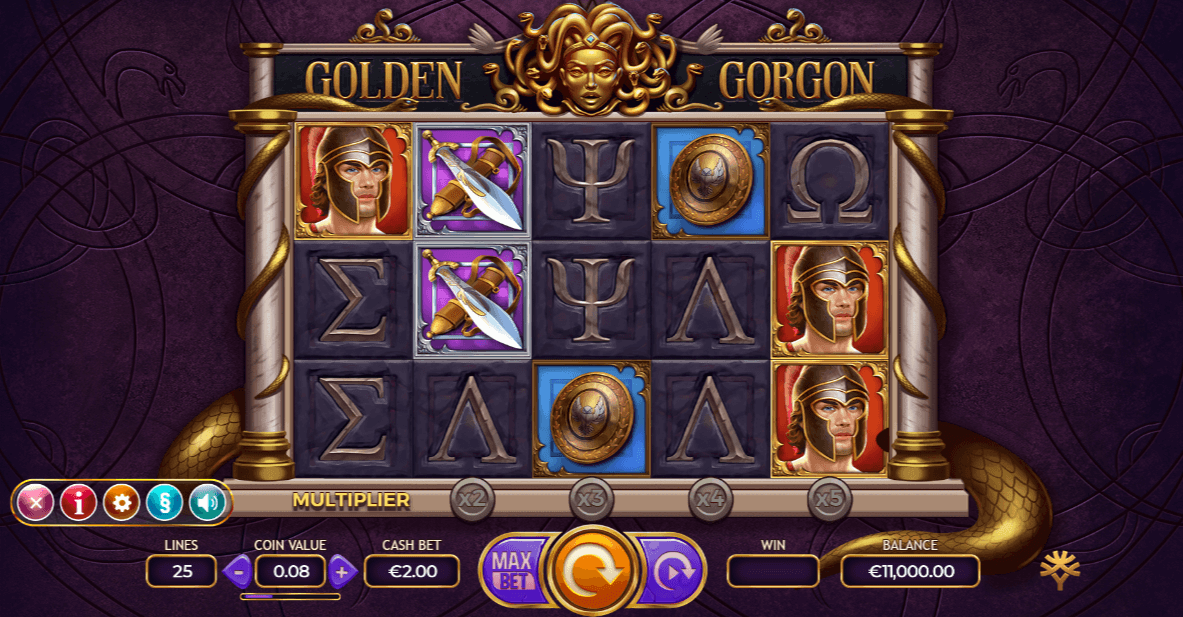 Game reels move fast and smoothly, stopping one by one after you spin. If you land a winning combination you can see that the symbols are also animated. You can see their glowing, zoom-in, and other effects. There is an excellent ancient-like soundtrack playing while you spin.

Four Greek letters are the low-paid symbols. Then there is a shield, a dagger, and a warrior. The value of the warrior is the highest, where landing 3, 4, or 5 on a payline brings you 0.6x,1.6x, or 20x your stake respectively.

With an average RTP of 96.0%, this is a highly volatile game meaning wins can be less frequent but they are big if they occur. Read more about the return to the payer (RTP) and volatility in our full guide.

Gameplay and Features on Golden Gorgon

The re-spins and the multipliers activated as bonus features can bring you to the maximum winnings. Since we don’t have free spins here, re-spins would take that role to boost the gameplay. Also, multipliers can increase winnings so there are two features we’ll explain in detail.

If you land 3, 4, or 5 matching symbols from left to right on a payline, you’ll trigger the Golden Gaze feature. Creating such a winning combination means Gorgon will lock those symbols in the position with her gaze. They will also become golden before the other symbols continue to spin again.

If you land a matching symbol to this position in the following spins, it will be also locked. Respins will follow until no matching symbol appears to be looked in place. Then comes the payout calculation of all landed symbols.

Multipliers during the Golden Gaze features can also increase your winnings. They can come into play if you land all symbols in a column. For instance, if you fill reels 1 and two with locked symbols, this activates 2x multipliers. Third, the 4th and 5th reel trigger 3x, 4x, or 5x multipliers. If you, for example, landed locked symbols on reels 1, 2, and 4 only, you’ll get the 2x multiplier. The columns must be neighbors to get the bigger multiplier.

Of course, due to the increased usage of smartphones, slots are often played on mobile devices. Mobile devices are an excellent choice if, for instance, you are a player that is always traveling. Golden Gorgon slot works very well on a small screen and is compatible with iOs, Android, and Windows.

There are several reasons why Yggdrasil is one of the most popular slot suppliers. Our favourite one is that they have excellent game titles delivered with exceptional quality of design and graphics. Another is the uniqueness of the gameplay and finally the great game RTPs. Besides the Golden Gorgon slot, there are many great games, but now we recommend the following:

Jokerizer- Jokerizer offers a retro slot action with an excellent RTP of 98.0%. With its 5 reels and 20 paylines, and incredible design this can be a nice game to play. Several features can lead you to an exciting gaming experience.

Nitro Circus - Nitro Circus is another slot by Yggdrasil with an RTP of 97.0%, which is above the industry average. Two bonus features, the free spins, and the Nitro Jump bonus game enrich the game.

Baron Samedi - Baron Samedi is another slot adventure by Yggdrasil you can try. It has an RTP of 97.0%, a cool design. It is loaded with features that include wilds, multipliers, guaranteed win lines, stacks, and mystery symbols.

In conclusion, we do enjoy playing the Golden Gorgon slot and recommend it as a high-quality slot. Our favourite is the Golden Gaze feature, which increases the chances of potential winnings while respinning. The music is also captivating, and the simplicity of the design makes it for you to focus easier on the gameplay. This slot can be a great choice even for beginners. Players can try the Golden Gorgon free play in some of the casinos we recommend.

Discover the Golden Gorgon slot by claiming a welcome offer right from this page and play at top-rated online casinos.