In the past few years, we’ve witnessed a big evolution in the concept of online slot games. Slot game developers have been experimenting with different themes and mixing fantasy, mythology with authentic historical elements. The newest instalment from Yggdrasil and Dreamtech Gaming called Labyrinth of Knossos proves that you can combine multiple genres in one mechanic. With a 5x3 setup and 243 active paylines, you’ll join Theseus on a quest to find and defeat the Minotaur that hides in the oldest city of Europe. Find out more about the story behind this slot game in our review below. 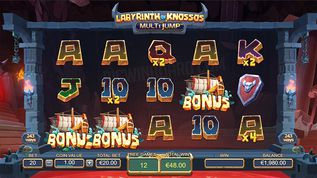 The Labyrinth of Knossos is a new online slot developed by Dreamtech Gaming through Yggdrasil’s platform. We are amazed by how this studio managed to incorporate a cartoon feel to an Ancient-themed concept. What’s new about this slot game is that it introduces a new mechanic called MultiJump. Here, multiplier values leap, or if you prefer, “jump” across the winning symbols. If by any chance two multiplier values collide, then those two are multiplied together. In the bonus game where you’ll have the opportunity to receive up to 40 free spins, every symbol lands with a MultiJump multiplier. Stay with us as we take you through the design and math model of the Labyrinth of Knossos slot.

About Labyrinth of Knossos Slot

Knossos is the largest archaeological city dating from the Bronze Age, and it’s considered to be the oldest city in Europe. In Greek mythology, the King Minos ordered a labyrinth construction where he’d later hide his son, the Minotaur. King Minos’ wife, Pasiphae fell in love with this creature. The legend says that Theseus, a prince from Athens, sailed to Crete to fight the Minotaur living in the labyrinth.

This labyrinth here is set on 5 reels, 3 rows with over 243 ways to win. All symbols and wilds land on the reels with up to 5x multipliers which will trigger the MultiJump mechanic across the winning paylines. But before you start your reel action, you must place your bets ranging from £0,20 and up to £60 per spin. Moreover, you can choose to play with the autospins option and adjust win and loss limits.

The Labyrinth of Knossos slot is all about the multipliers that play the leading role in the bonus features. Symbols and wilds land on the reels with 2x, 3x or 5x multipliers attached to them. If you’re lucky to land more than one multiplier, their values are combined (multiplied). More example, if a winning payline includes 3x and 5x multipliers, you’d receive a 15x boost to your total. This boost goes up to 3,125x your bet.

This slot game revolves around the Ancient Greek myth about the Minotaur and the prince that defeated it. The reels look like they’re made of stone, placed in a dark labyrinth passage. The overall visual feel is very dark, gloomy with dominant colour shades of blue, grey and green. The cartoonish style blends well with the animations and the orchestra music in the background.

On the paytable, you’ll find A-9 royals as well as a shield, a sword, the Minotaur and Pasiphae. Prince Theseus is the game’s wild symbol which appears in stacked formation and lands on reels 2,3 and 4. This symbol also lands with a multiplier value attached. The sailing ship represents the scatter symbol which triggers the MultiJump Free Games feature. This bonus feature comes with up to 20 free spins, with a chance to win 3,125x your bet.

RTP, Variance and Payouts for Labyrinth of Knossos Slot

The theoretical Return to Player (RTP) percentage of the Labyrinth of Knossos slot is 96.42% which is slightly higher than the industry average. Also, the game’s variance is medium to high, which means that you won’t land frequent wins during the base game. This online slot is perfect for players that like to play on highly volatile slots, but don’t want to take big risks. Even though this game is high on the volatility scale, the maximum payout is relatively modest. The maximum you can win per spin is capped at 4,679x your bet, and that is only possible if you get the highest MultiJump multipliers in the bonus game. Here you can read more about the Variance, Volatility and RTP in online slots and see which one suits your preferences.

Gameplay and Features on Labyrinth of Knossos Slot

The Labyrinth of Knossos slot has quite simple and straightforward gameplay when it comes to bonus features. As we’ve mentioned above, every reel action revolves around the multipliers, which can jump from one symbol to another. This is possible during the MultiJump Free Games feature. Let’s see what this bonus game has to offer.

This feature is triggered once you land at least 3 sailing ship scatter symbols on the same spin. You can then look forward to playing with 10, 15 or 20 free spins for 3,4 or 5 symbols scatters respectively. The one thing that makes this bonus game different from the base game is the fact that all symbols except the scatter land with a multiplier. This option drastically increases your chance to land decent MultiJump multipliers that can go as high as 4,679x your bet. This payout will be a result of a scenario where you land 5x multipliers on all 5 reels. Moreover, you can retrigger the free spins if you manage to land 3 or more scatters during the gameplay.

Labyrinth of Knossos Slot on Mobile

If you like to take your reel action on the go, it’s good to know that Labyrinth of Knossos slot is optimised for mobile and adjusts on any operating system. You’ll receive a top-quality, seamless user experience every time you access this slot game from your mobile device.

Yggdrasil stands out as a developer that always provides high-quality games with innovative design and features. For example, check out their latest slot game called Johnan Legendarian that takes us back to more primitive, barbarian times where you can win up to 5,000x your bet. Their homage about the Solar Eclipse phenomenon called Ancient Eclipse is no less than outstanding where sun frames transform into wild symbols, taking you closer to play the bonus games. If you’re up for a different winter expedition, make sure to check out the Frost Queen Jackpots slot. Even though the theme looks and feels cold as ice, there’s a lot of action going on in the bonus rounds. Here, you can trigger Jackpot prizes, play with mystery treasure chests and collect keys that take you to the free spins round.

The Labyrinth of Knossos slot didn’t disappoint us regarding the design and mechanics. Once again, the developer delivered exquisite design and engaging gameplay. The MultiJump Free Spins are just enough regarding the bonus round, as it’s unnecessary to overstuff the theme and make it more complicated. If you are a fan of Greek, mythology-themed slots that tell stories about unbelievable events, try spinning the reels of this exciting Yggdrasil release. Good luck and play responsibly.

Explore the Labyrinth of Knossos slot by claiming a welcome offer right from this page and play at top-rated online casinos.