Golden Goddess is an incredibly popular title from IGT that sits within the Greek Mythology category of slot games. Play Golden Goddess slots online for the chance to win 1000x your bet with the click of a button! With its Super Stacks feature and lucrative cash prizes on offer, it’s no wonder Golden Goddess is such a popular choice for slots players across the internet. 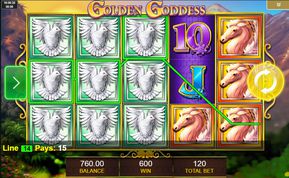 IGT’s Golden Goddess slot uses Greek mythology as inspiration for its design, as do a number of popular casino games. However, this slot is one of the best in the category due to its gameplay, visual quality and in-play offerings, as well as an acceptable RTP of 94.75%. Spin for the chance to win across five reels and 40 paylines, hopefully landing combinations of symbols for cash prizes.

Coming from IGT, a notable slots software provider in the iGaming industry, Golden Goddess has met the high expectations of thousands of players. Launched in 2013, it also appears to be standing the test of time. The 40 fixed paylines on offer is certainly on the upper end, meaning you have the chance to land combinations in plenty of different ways. As such, it’s a low variance game, meaning payouts tend to come little and often.

Golden Goddess is a multiline video slot offering free spins, scatter symbols and an exciting Super Stacks feature as mentioned above. Aside from these additional features, there is a potential huge payout at its core - 1000x your bet size. We’ll go into more detail about what Golden Goddess offers later on in the review. For now, continue reading to find out exactly what we thought about our experience playing this popular slot game.

Our First Thoughts on Golden Goddess - Try It Out!

If you couldn’t tell already, we at SlotsWise are big fans of Golden Goddess. As soon as we launched the game, it was clear that this was a professional, high-quality title - as you’d expect from IGT. Not only are the symbols clear and crisp, but the imagery behind the reels also adds to the slot’s overall atmosphere and theme.

Setting our wager amount was easily done by clicking the arrow to the left of the reels. All 40 paylines are fixed so we only needed to set our bet size per line. We were then ready to spin the reels and after doing so just once, we managed to land a win of 3x our total bet. While we can’t promise that you’ll achieve the same, it certainly seemed to meet our expectations of a low volatility slot.

It took us a while to reach the free spins bonus round but the Super Stacks feature was triggered quite frequently. This is when stacked symbols (one one reel) appear next to more stacked symbols on the next. When this happens, the payouts can be significant and in a very special instance, the prize can be exceptional… but we’ll go into more detail shortly. 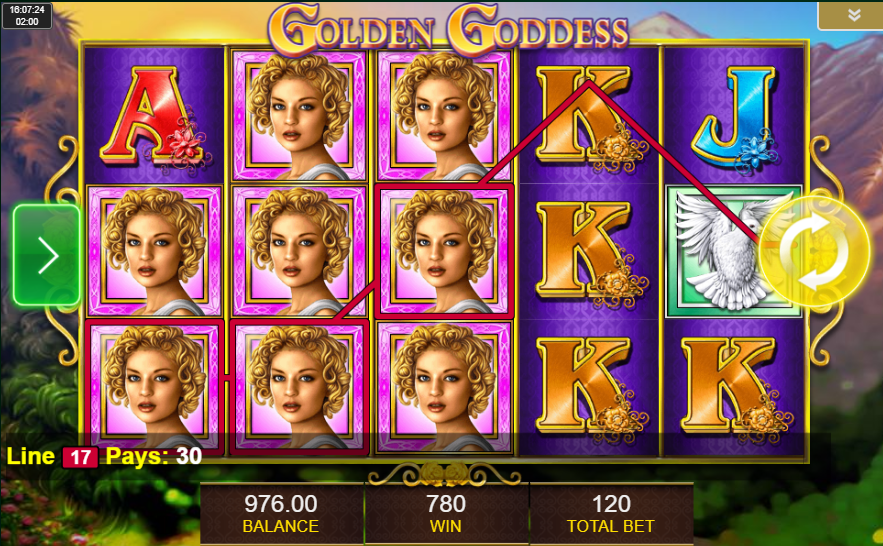 Golden Goddess slots isn’t the first to use Greek Mythology as inspiration for its theme and it won’t be the last. However, it is one of the better Greek Mythology slots using high quality, on-theme symbols.

IGT use various themes, cultures and mythologies for their online slots, so Golden Goddess isn’t out of the ordinary in that sense. While their aren’t many Greek slots in their roster, ancient civilisations do feature heavily - think Egyptian, Roman and Viking.

Aside from Greek Mythology, Golden Goddess slot is one that fits within the theme of multiline games. As you might imagine, multiline slots feature a more than one payline, meaning that there are a number of different ways for players to land combinations of symbols across the reels.

As mentioned, Golden Goddess launched in 2013 and has witnessed great popularity since. It was perhaps this popularity that led to the release of Golden Goddess MegaJackpots, the progressive version of the game that is part of IGT’s wider jackpot network.

Golden Goddess’s background is so appealing to players for a number of reasons. IGT has built up its own reputation over the years as a well-respected and trustworthy software provider. As such, Golden Goddess is met with trust as well. IGT’s history of great jackpot slots also lends itself to IGT - players come knowing that there they have the opportunity to win big.

How to Play Golden Goddess

Playing Golden Goddess slots online couldn’t be easier. Simply choose your preferred casino or slots site offering the game, register and deposit, and then get started.

Once you launch the game, the first thing you’ll need to do is set your wager amount per spin. As all 40 paylines are fixed, you’ll simply need to click the arrow to the left of the reels and choose your total bet amount. Once that’s done you can then get started by spinning the reels, clicking the button on the right side of the reels.

You’ll be able to see your total balance, each spin’s win amount and your total bet at the bottom of the screen. Of course you don’t need to play with the same total bet the whole time, so whenever you wish to change it, simply click on the arrow to the left.

The symbols themselves are of very high quality and appear more life-like than cartoonish, and taking all of the above into account, the slot symbols for Golden Goddess will come as no surprise.

You’ll find typical playing card symbols making up those of lower value, while the more on-theme inclusions are a white dove, horse, man in typically Greek attire and a blonde woman whom we can probably assume is the eponymous Golden Goddess. The game’s logo represents the wild symbol and the red rose is the scatter. This is key when it comes to triggering the Free Spins Bonus round.

Golden Goddess’s most lucrative payout is awarded if five wild symbols are landed across a payline. For this, you’ll receive 1000x your bet and even four will award 250x.

You can play Golden Goddess online at the likes of Betfair and Paddy Power, as well as at a number of other top casinos.

Like all slot games, you will simply need to land combinations of symbols across the paylines to receive cash prizes. The amount you win depends on which symbol you land and how many.

As mentioned, the Golden Goddess logo symbol is the most valuable and landing five of them will pay out the game’s maximum. The symbol on the other end of the spectrum is the ‘10’, paying out 11x your bet for five, 6x for four and just 1x your bet for three.

Aside from the main game, players also have the opportunity to win cash prizes in the Free Spins Bonus round. The symbols hold their value in this feature, meaning the payouts are the same as the main game. 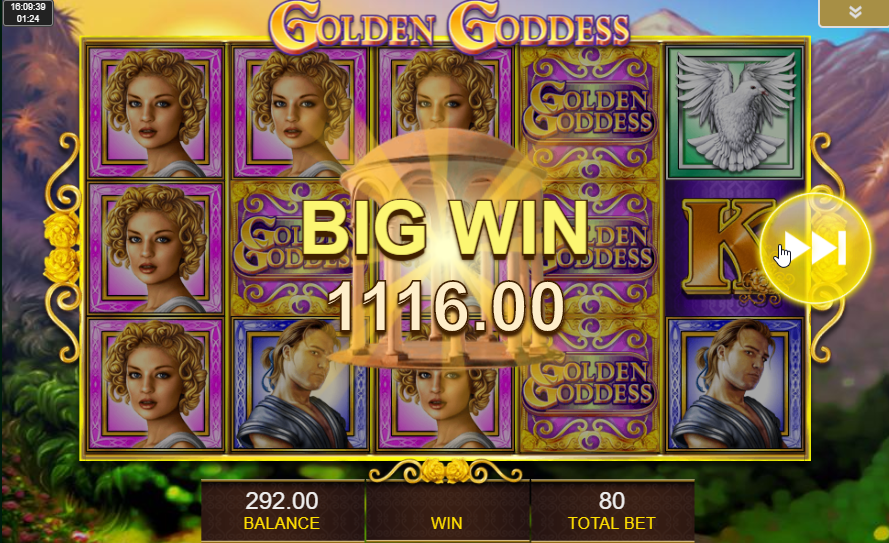 Each reel contains large stacks of the same symbol and before each spin, a symbol is chosen at random to fill each reel’s stack. The stack can contain any symbol but the Bonus symbol. All symbol that are stacked on a reel then transform into the same symbol.

The same symbol can appear in the Super Stacks on multiple reels during the same spin and when the same symbol appears in the stacks on adjacent reels, the potential for big wins increases.

Players can trigger the Golden Goddess Free Spins Bonus round by landing 9 rose scatter symbols in a square formation across the middle three reels. The rose symbol is only found on reels two, three and four and once the round begins, players will need to choose a bonus symbol to reveal the blonde Golden Goddess, the man, horse or dove.

This symbol will then become the Super Stacks symbol throughout the Free Spins Bonus round. Once triggered, players will receive seven free spins and the round cannot be retriggered in the same game session.

You can try out Golden Goddess for free by playing a demo version online. This will let you get a feel for the game without having to play through real money. Get an understanding of how the game works, what it looks like and what’s on offer.

Overall, this is a great game that we recommend highly. From the overall appearance to smooth gameplay, there is plenty to enjoy with Golden Goddess.

The low volatility led to wins of lesser value for us, but they did occur often. This allowed us to play for longer and experience the different elements that this IGT title had to offer.

With a free spins round and the Super Stacks feature, there are a number of reasons to keep playing for. If you do manage to achieve either or, they can be very lucrative. Play Golden Goddess online today and see if you can spin the reels for the chance to win cash prizes! 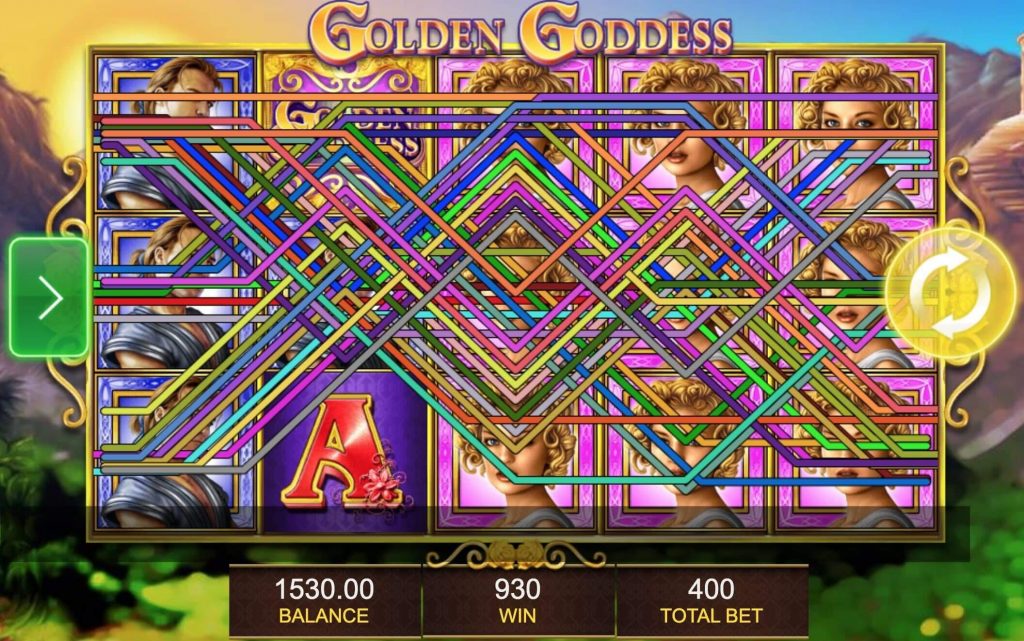