Starburst slot is one of the most widely played online slots in the world. The game has five reels, three rows and just ten paylines, but comes with lots of reel action and features that are fused into the gameplay. The maximum possible win has been estimated at 500x the stake. The expanding reels and automatic re-spins exist in addition to the cluster wins. The absence of a free spins bonus shouldn't trouble anyone looking for a fun time on the slots with a chance for a win, because Starburst has a win two ways feature too. Find out more in our full Starburst Slot Review. 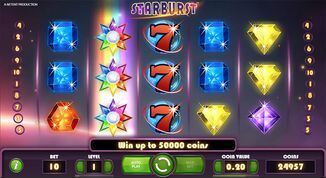 Starburst slot has become the most frequently played online slot and even though it was released back in 2013, it is still found at the very top on the online casino sites. The developer behind it is NetEnt, a well-known company for producing stunning games, both in terms of design and quality.

Starburst slot features 5 reels and 10 paylines, although there is much more to offer, including the Starburst jackpot prize, as you'll soon find out when you play this game. Carry on reading our Starburst Slot Review to learn more. 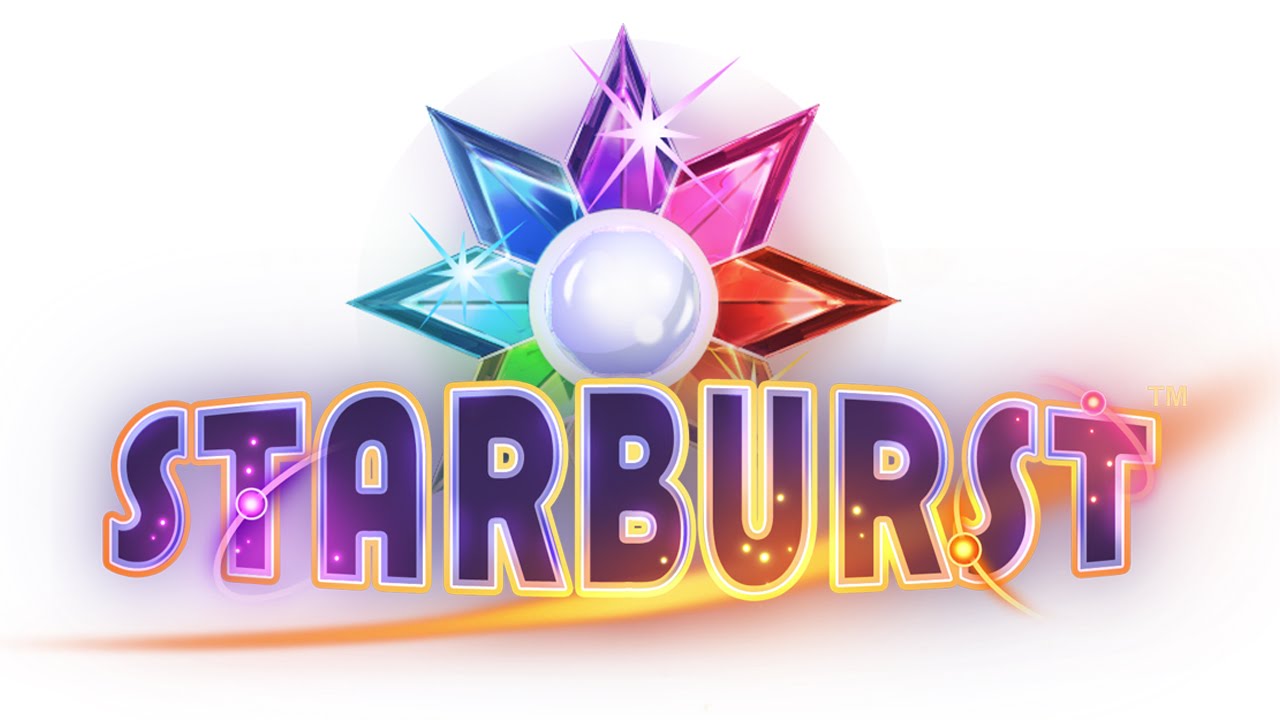 Play the Starburst slot and witness its great gameplay first-hand. It's NetEnt's most popular slot and the most popular slot ever. It's a timeless classic that stays on the first position of best online slots at most of the online casinos.

Starburst is a simple and user-friendly slot machine that is made up of colourful gems. Its low variance and huge payout potential make it so attractive and popular among slots players, both new and regular ones.

This mega-popular slot machine plays on 5 reels, 3 rows, and 10 active paylines. Before you start spinning the reels of the Starburst slot, you must select your bet per spin, which here ranges from £0.10 to £100.

With such a huge range of betting options available, Starburst caters to players of all pocket sizes. And on top of that, with a jackpot of whopping £500, the potential winnings for this slot can be excellent!

While there's no Free Spins feature, the Starburst slot is packed with the Starburst Wilds feature, where you'll benefit from expanding wilds and respins. We'll explain this in more detail below in our Starburst Slot Review.

The five jewel symbols come in purple, blue, orange, green and yellow colours and their value ascends in this order too. These symbols really do brighten up the screen, plus they look even better on HD screens!

Starburst slot also brings a classic element to the game by having seven and bar symbols, commonly found on old-school slot and fruit machines. The other symbol is the Starburst logo which is the wild symbol, substituting for other symbols to help create winning combinations.

Once the spinning starts, you'll realise the Starburst slot game offers more than attractive gems and glistening features. The perfectly-pitched gameplay really presents this slot as more than a one-trick pony. The reels spin quickly and smoothly, before they come to a halt, hopefully landing winning combinations of symbols across any of the 10 paylines.

When playing the Starburst slot, you can also use the autoplay feature, allowing you to sit back and enjoy this video slot as the reels spin by themselves.

The theoretical RTP percentage of the Starburst slot is 96.09%, which is the industry average. In addition, the game has a low to medium variance, so you'll get plenty of regular and low-sized winnings in your gameplay. In fact, about 22.65% of the spins will result in a win, according to the hit frequency rate.

The maximum payout you can take from the game is set at 500x the stake. If you want to learn more about different RTP and variance models, read our Variance, Volatility and RTP guide.

Gameplay and Features on Starburst Slot

Starburst, like many other online slots, has a number of different bonus features that can be triggered while playing this NetEnt game. Continue reading to find out more about Starburst bonus features.

Although the Starburst slot doesn't necessarily feature bonus features in the purest sense of the word, there are a few additional extras that occur throughout, keeping excitement levels on edge.

Players can win money if blocks of symbols are landed. So, if nine jewels land in a triangle, you'll receive a payout.

The Starburst slot game also allows players to land winning symbol combinations from both, left to right and right to left. Whilst it may not sound like much, this does offer players a nice advantage when trying to land Starburst combinations and win some cash. 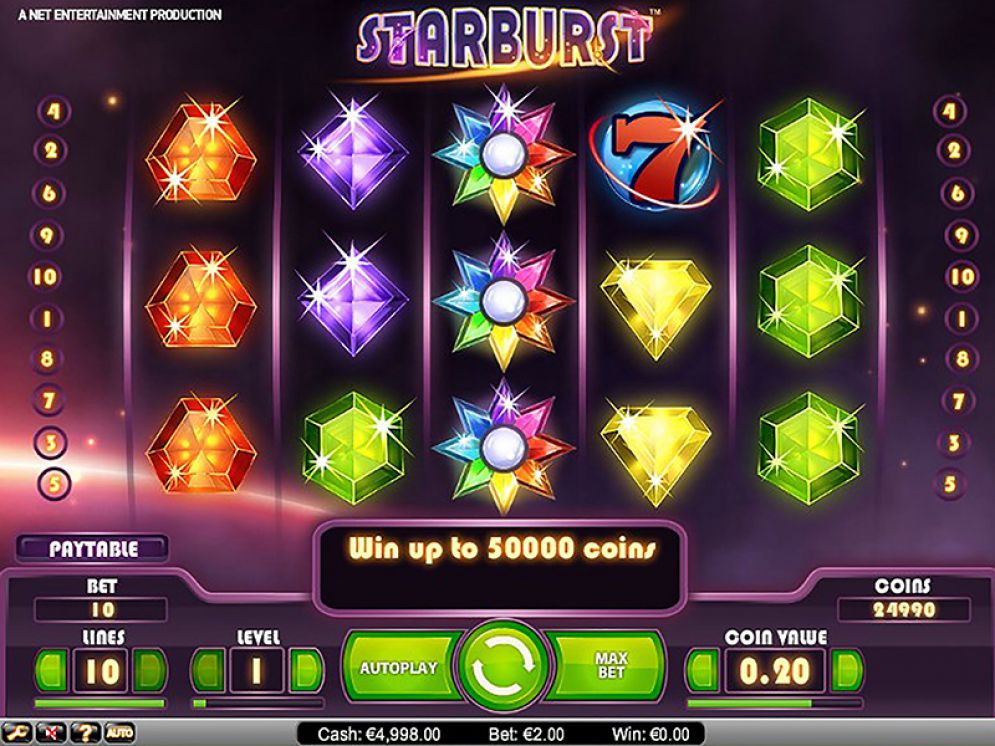 Starburst is available to play on all mobile devices, both smartphones and tablets. Whether you prefer Android or iOS operating systems, it doesn't matter because the Starburst slot is available on both of them.

Just access the online casino from your mobile browser and you'll find Starburst there. In addition, there are a couple of online casinos that have their own mobile applications from where you can also access the Starburst slot. 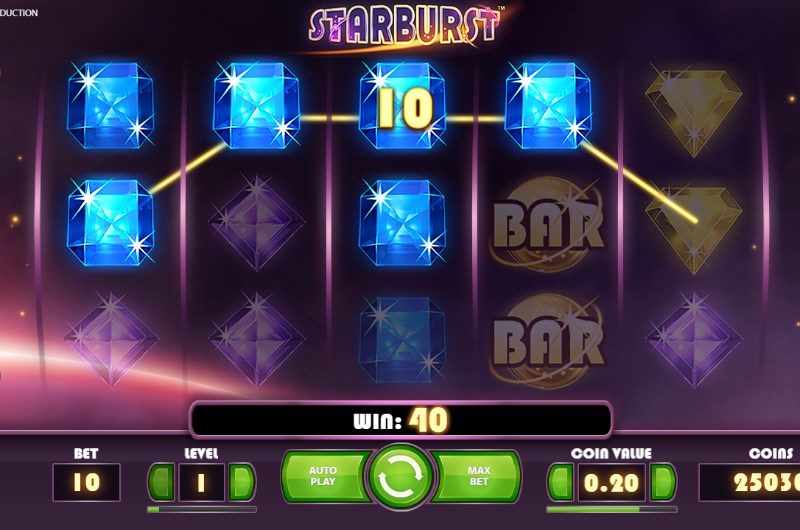 Players who want to try playing the Starburst slot but don't want to spend money on it can try the Starburst Slot Free Play version. The demo version of this game can be found at all online casinos that host demo slots.

When playing Starburst in free play mode, all bonus features and settings that are available in the real money version of the game are available.

Starburst demo is no different from the real money version, with only one difference - you can’t win any real funds. But, you can’t lose any either, so it is a risk-free option.

The free play version of Starburst is perfect for players who want to see how the game works in action before they decide whether they want to play it for real money.

As we mentioned, the Starburst slot is one of NetEnt’s most popular online slots, but this company has developed quite a few exciting games over the years. Here are five of the most popular NetEnt slots.

If you are a fan of the hilarious cartoon series, then you are definitely going to love playing South Park slot. So, begin an adventure with your mates Stan, Kyle, Cartman and Kenny on the 5 reels, 3 rows and 25 fixed paylines.

There are four bonus rounds that can be activated within the bonus feature: Stan Bonus Spins, Kyle Bonus Spins, Kenny Bonus Game and Cartman Bonus Game. There are 3 more mini-features – Cartman, Mr Hankey and Terence & Philip.

By playing Jack Hammer slot, you will have a chance to be a hero and save Grand City from the Evil Dr Wuten. So, join the private eye, Jack Hammer, save the citizens and play to win the game’s jackpot prize. This non-progressive video slot has a theoretical return to player set at 97%.

This progressive game has 5 reels, 3 rows and 25 paylines and is one of the most popular NetEnt games of all time. When it comes to bonus features, you have the Wheel of Fortune Bonus Game, Free Spins and most importantly, the game comes with a progressive jackpot prize that grows by the minute.

The popular movie Aliens was NetEnt’s inspiration for this slot, and all symbols, visual details and bonus features in the Aliens slot are linked to it. The best part about Aliens slot is the bonus feature that has 3 different levels. The first one is the Search, the second is the Encounter and the third is the Hive.

NetEnt's Starburst slot is one of the most popular slots around and for a good reason. Compared to many others, Starburst stands out in many ways. The production of this game really is top quality, as is usually the case with NetEnt slots.

This, alongside the great gameplay, leads to a game that really is something special. Jewels will shine as you spin the reels, accompanied by some enjoyable cosmic sound effects. With a Return to Player rate of 96.10%, there are plenty of opportunities for you to win huge cash sums and get the edge over the casino.

Although we've always been big fans of free spins bonus rounds, and Starburst slot doesn't have one, we'd still find it hard to dislike this slot game! Starburst's other additional features allow players to get their hands on some lucrative multipliers, which is always good!

Explore the Starburst slot today and claim your bonus offer at one of our featured casinos.

Does Starburst slot have free spins?

Unfortunately, the Starburst slot doesn't offer free spins in its gameplay. However, it has a win two ways feature that replaces free spins and brings great winnings. In addition, there are many online casinos that offer free spins on Starburst in their welcome offer, so you can claim them there. In fact, Starburst is the most popular choice when it comes to free play.

Starburst slot can be found for free play at many online casinos. The demo version of Starburst is a great way for you to learn how to play the game and learn how to place your bets in the real game.

What is Starburst slot's RTP?

What is the Starburst slot max win?

Can I play Starburst slot on mobile?

Yes, apart from desktop, Starburst slot can be played on mobile and tablet devices too. You can access the game from your mobile browser by accessing the casino's site or you can play the game on a mobile app if the preferred casino has one.