Play the Centurion slot at one of our featured casinos and spin for a chance to win today! This is an Ancient Rome themed slot with more than one bonus feature, 20 paylines and payouts that go up to 500x the stake. The wild symbol substitutes for all, except the scatter-bonus symbols that trigger on of the following Centurion bonus features: Prizes on Parade, Ceasar's Free Spins, Road to Rome and Wild Power spins. Do you think this is all? Wait 'till you see the base game modifiers causing reels to become colossal, turn up five of a kind on the flop, and more. Carry on reading our Centurion Slot Review to learn more. 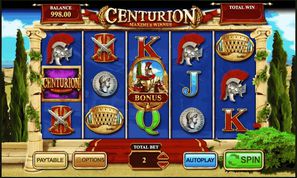 Venture back to the ancient times of Rome to enjoy this great game and march on your quest for big wins. Join the journey of a Roman soldier working his way up through military ranks to become a leader of men...a Centurion! The Centurion slot features 5 reels and 20 paylines that can deliver payouts of up to 500x the stake. There, you’ll benefit from a wide range of bonus features and modifiers that we’ll explore below in our detailed Centurion Slot Review. 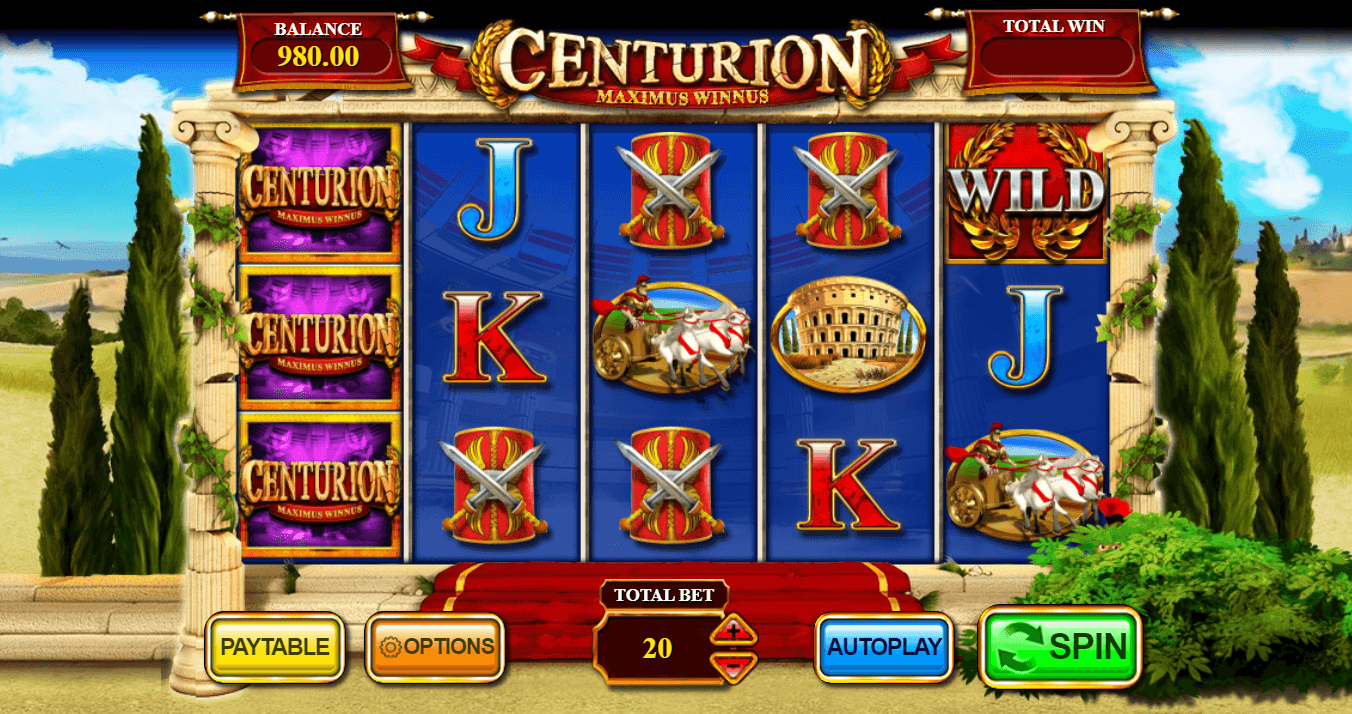 Centurion is one of the online slots that has been on the list of the most popular slot games for years. It’s developed by Inspired Gaming and features a Roman theme. The full name of this online slot is Centurion Maximus Winnus and the game is inspired by the Roman soldiers. The professional Roman soldiers were called Centurions. These professional soldiers were commanding a unit of one hundred soldiers or in other words called ‘centuria’. Centurions led their entire unit from the front and led their soldiers into the battle.

The Centurion slot features 5 reels, 3 rows, and 20 active paylines. You can join the Roman soldiers by setting your preferred bet level before hitting the spin button. This game accepts different betting options that range from £0.20 to £250 per spin, so there are enough options to suit both new and regular slot players. Winning combinations are formed by landing 3 or more matching symbols across an active payline, starting from the leftmost reel.

In Centurion, you can take advantage of a wide range of bonus features and extras, and can win a maximum prize of 500x the stake. There is a bonus wheel that can be triggered by landing the necessary symbols and it will determine which bonus feature you’ll get. So stick with us as we explain all the bonus features below in our Centurion Slot Review. 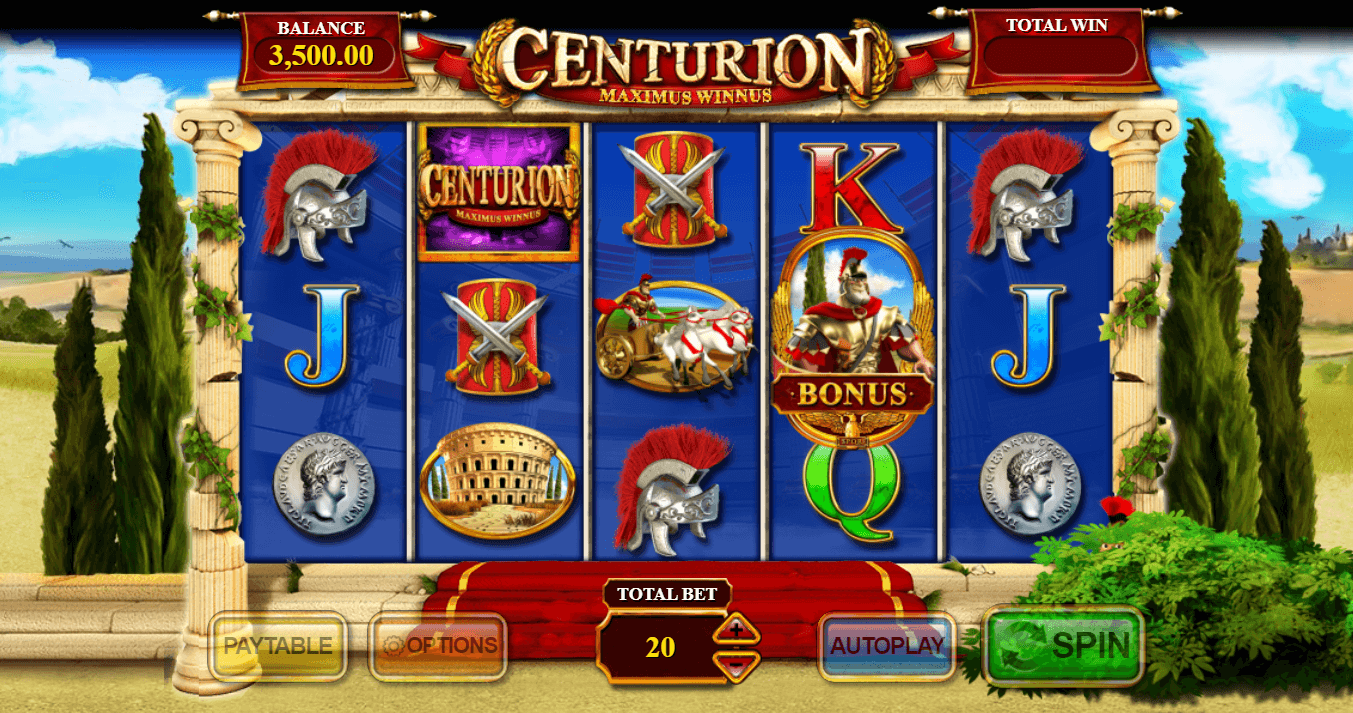 When it comes to the design, symbols and graphics of the Centurion slot, we must say that the game is well-designed given the fact that it was released years ago. This is a Roman-themed slot game so you’ll come across Centurion-inspired symbols: a Centurion helmet, a shield crossed with swords, a coin, the Centurion logo and two Centurions handling a horse-drawn carriage. Besides them, there are low-paying J, Q K and A royals. The game also have special symbols that are part of the bonus features, as well as a wild symbol to help you form winning combinations.

Centurion slot boasts a Return to Player (RTP) of 95.00%. Although this may not be the highest Return To Player rate within the slots scene, it isn’t necessarily low either. This, combined with the game’s many bonus features, varying coin sizes and smooth gameplay make Centurion a slot that is worth playing. What’s more, Centurion belongs to the medium variance group of online slot games, meaning that you can land both low and high-sized winnings in your gameplay. In total, you can end up winning 500x the stake, which is great. If you want to learn more about different RTP and variance models, read our Variance, Volatility and RTP guide.

Gameplay and Features on Centurion Slot

The Centurion slot features plenty of bonus features that can be triggered throughout your time playing this game, simply by landing three or more of the bonus symbols on the reels, anywhere in sight! Once this happens, a bonus reel will enhance the Centurion soldier and spin, eventually landing on one of the four mini-games to determine which one that you'll get to play! 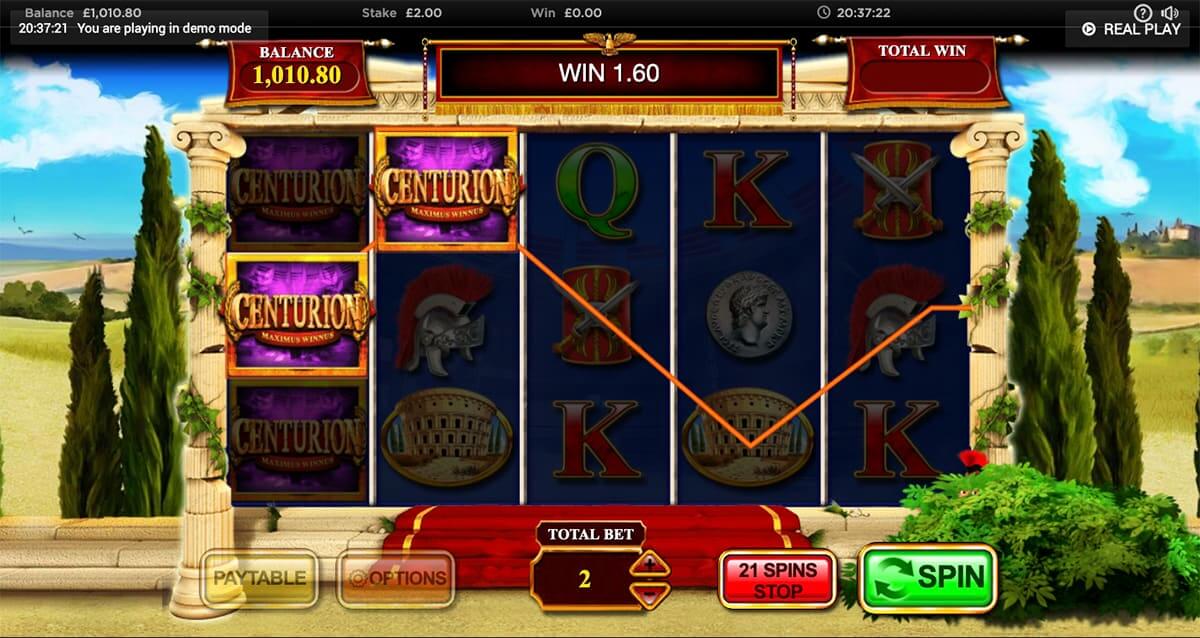 The Centurion mini-games on offer are:

Three centurions holding shields will appear, covered in multipliers, arrows and 'collect'. You'll have to press the 'Stop' button and the flashing light will land on a position on the first shield. A multiplier awards a prize, whilst the arrow will move you to the next. Landing on 'Collect' ends the round, however!

You will have to spin two wheels to determine the number of multipliers and spins that'll be awarded in the Centurion slot.

Much like a board game, you'll have to roll the dice in this bonus round to move your centurion along. There are increasingly valuable multipliers up for grabs along the way and the round will eventually end once the specified amount of dice rolls have been used. If you make it to the end or land on the 'Go To Rome' square, you'll be taken to Rome to unveil a large final prize at random! 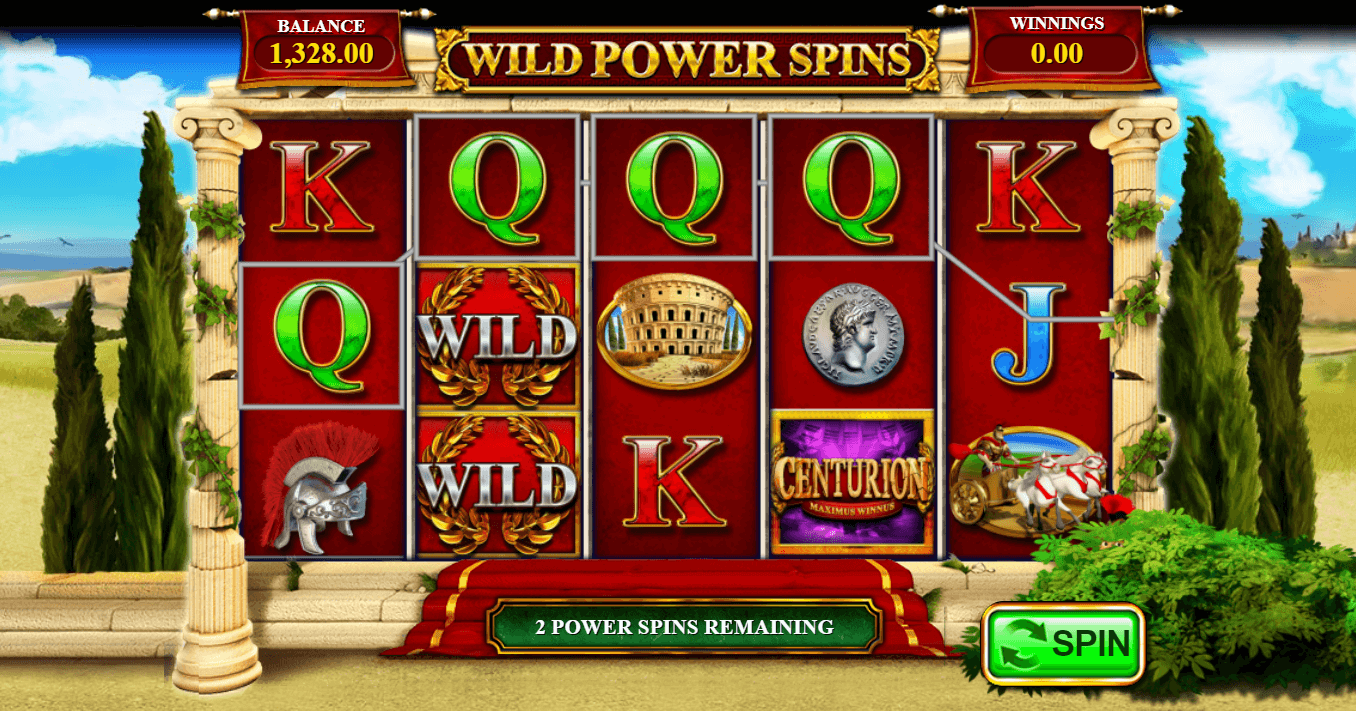 You're given three free spins in this bonus feature. On the first, reel two is completely wild, whilst reels one and two are wild in the second, and reels one, two and three are all wild on the third!

Throughout the base game, there is the opportunity for reel-modifying mini-bonuses to be triggered. When the Centurion blows his trumpet, any one of the four following reel modifications can occur:

We have good news for players that enjoy playing their slot games on mobile. Centurion slot is available on mobile both iOS and Android, tablet and desktop. This means that you can play Centurion slot wherever you are as long as you have a solid internet connection. 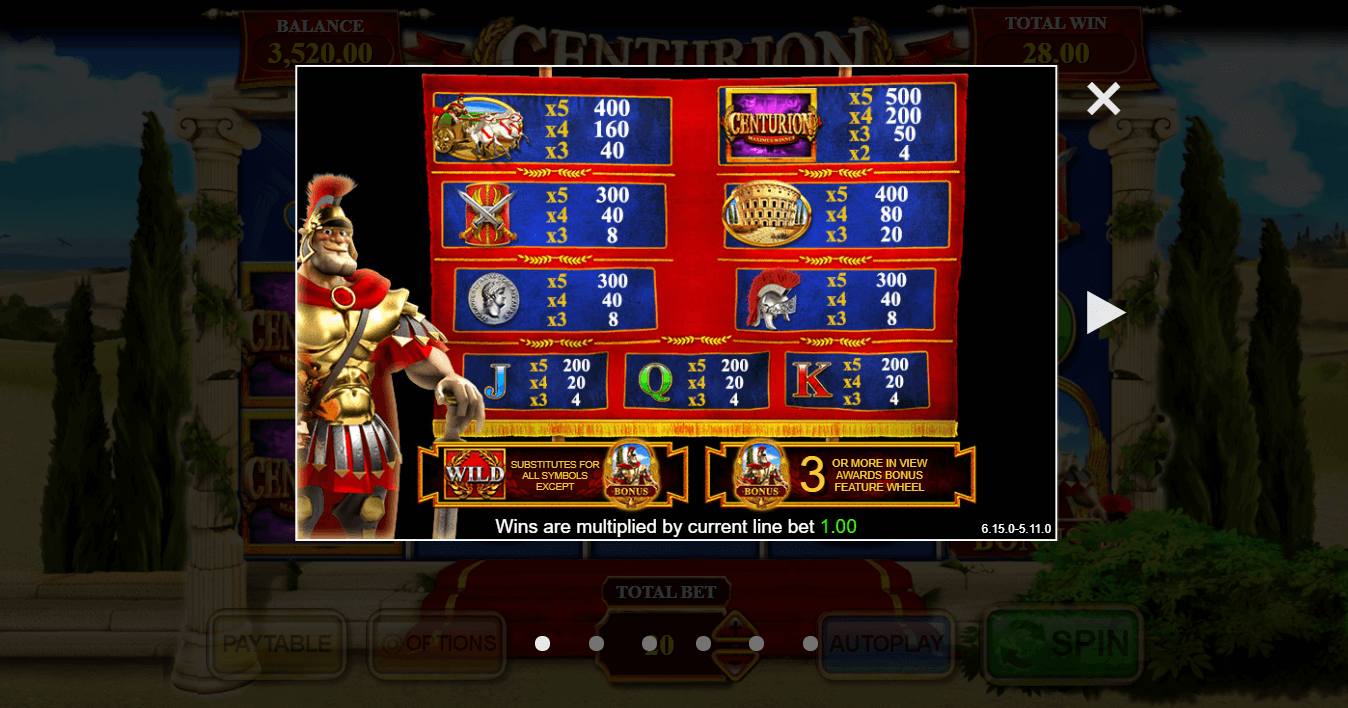 As we already mentioned, Inspired Group is the software developer behind the Centurion slot. This company was established back in 2007, in the UK. Since then, they've shown that have what it takes to become one of the most reputable names in the online gambling industry. Some of their most popular slots, other than the Centurion slot are Goddess of the Amazon, Rise of Anubis, Super Hot Fruits and many more. Feel free to read our reviews of each game and find out more about them individually.

At SlotsWise, we have a vast collection of slot reviews and some of them were inspired by ancient Rome. So, if you were looking for other games that share the same theme, here are some of the most popular Roman-themed slots:

Centurion looks like a very simple game. But, once you get to know it better, you’ll realise that it comes with plenty of features and extras to keep you entertained. What is interesting to mention is that Centurion was nominated for “Game of the Year” at the 2015 EGR Operator Awards. That must count for something! All in all, it’s a great game that has a lot to offer so if you get lucky, you can end up winning prizes of 500x the stake.

Discover the Centurion slot by claiming a welcome offer right from this page and play at top-notch online casinos.