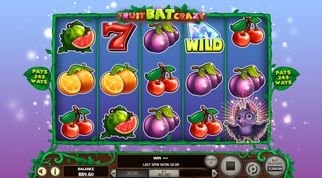 Play the Fruit Bat Crazy slot for a chance at the top payout of £10,000 and other smaller, but still hefty cash prizes.

Betsoft are behind many cute online slots that have found their following among the players. We have such game of similar capacity in the Fruit Bat Crazy slot. It is set in an enchanted reel-set of three rows, five reels and 243 ways to pay, surrounded by orbs and fireflies. This is obviously a very light theme with a cute bat that gives it its title. The symbols are fruits and some classical slots symbols, such as bells and the lucky seven symbol.

But what makes Fruit Bat Crazy different from other slots games is the style of play. The reels work in the 'collapsing reels' fashion, with the symbol wins making room for a fresh set of symbols, which could generate a new winning combination, and this could go on for a number consecutive winning events. There is a bonus feature in the game, which could also be purchased directly by the player, and there is the coin symbol which goes into the prize of that feature, in order to decrease it.

The game has some specialty symbols - the bat and the diamond, and both contribute to the chances for landing a winning combination and that makes for a more exciting gameplay. The diamond symbol has the ability to become sticky for a number of turns, and that could lead to it interacting with the rest of the symbols towards making a win.

The game can be set up with just couple of clicks, because Betsoft have made doing it quite easy. Since the game's 243 ways to pay are fixed in number and always active, the players need to have in mind what value they are going to choose from the ticker below the reel-set. The smallest value there for the bet per spin is £0.40 and the biggest value is £40.00. Coming to think of the range of available bets, the options are indeed limited.

With the basic bet stated as above, there is only one more available value that is below the £1.00 mark, and surprise - there isn't a bet that is £1.00, rather, the next value over is £2.00. So the players have to choose how to dose their bets in order to prolong their gameplay, which is always in relation to the returns in the Fruit Bat Crazy slot.

Speaking of which, the bonus symbols are there to accentuate the winning combinations whenever these occur. The other buttons that can have use in the game are the Autoplay and the Paytable. The former is located next to the Spin button and the latter is on the far left of the bottom corner, where there is the 'i' button. The playtable informs the players about all of the symbol pays and the bonus features, while the Autoplay button does well to set the number of automatic spins, the cost of each spin and the the total cost of the automatic rounds.

The game’s most lucrative basic symbol is the pineapple. The wins for a combination of 3x, 4x and 5x and displayed in the paytable, which is dynamic and the amounts change with the bet. The next most valuable symbol is the lucky seven. The Wild is a diamond and it substitutes for any symbol, except the Fruit Bat and the Bonus Buy Icon, and it occurs on reels two and four only.

Then there is the Exploding Win Ladder, which is pretty much the cascading or falling reels style of play, when it occurs in a number of consecutive wins. Those symbols that are part of a winning combination will explore and make room that will be filled in by the symbols above. The explosions could go on until there are no more symbols on the reels, meaning, each one has been part of a winning combination, with the winnings to match.

The most anticipated symbol in the game is the shiny happy fruit bat, which is a booster to the wins and it triggers free spins. It appearing twice on the reeps pays a sum but without any spins. It appearing three times will pay a more decent amount and award 10 free spins. The most that the bat can deliver in terms of free spins is 200 when it basically covers the entire grid with the symbol; in that instance, when playing with the biggest bet of £40.00, the top payout is 200 spins pays £10,000.

To fly with this crazy bat in the Fruit Bat Crazy slot, you can discover the game at one of the casinos on this page. You can start your adventure by claiming one of the welcome bonuses.