Ned And His Friends Slot

Join Ned and the rats as they sing and dance their way into your heart, offering fun features and great wins along the way. 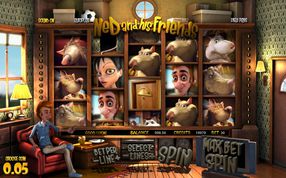 Ned And His Friends Slot Online

Betsoft are one of the oldest online slots companies that are still in business. They may not be up to the level of NetEnt, or Microgaming, but Betsofthave developed quite a few exciting 3D online slots. In fact, 3D slots are Betsoft’s specialty. Ned And His Friends slot is a Betsoft game that was released in 2018 and the first thing we’ve got to say about it is that it comes with impeccable graphics and exciting gameplay. Stay with us if you want to find out more about Ned And His Friends slots. Even if you’ve seen and played quite a few slots over the years, we will go on and assume that you haven’t seen a game like Ned And His Friends yet.

Ned And His Friends Overview

As it is clearly indicated by the name, this is a game where a guy called Ned is the main character. And you will see him sitting left of the reels, but you can also see him on the reels. His friends are perhaps even more interesting. Ned’s friends are rats, that’s right – rats. But these rats aren’t scary at all.

The music and the overall sound effects are also quite extraordinary. In addition to music you will also hear various sound effects, and even Ned talking. He drops a line or two after certain spins. During one of the bonus features you can even hear the rats signing.

A large fan is placed above the reels, and there is a window behind Ned, as well as a door on the opposite side of the screen. Most buttons are placed below the reels, but there are also buttons above the reels. It is worth noting that even though the buttons can be spotted easily, they still fit the theme and the atmosphere.

How To Play Ned And His Friends Slots

The layout is pretty much standard, there are five reels and three rows with a total of 30 paylines. Before spinning the reels, you should select a wager. And it’s not just the wager, in this game you can also change the number of active lines, you don’t have to wager on all 30 paylines, you can activate just a fraction of them.  In fact, you can activate any odd number of paylines from one to 30, plus 28 and 30.

You will notice that on both sides of each of the two buttons there are plus and minus buttons respectively, so clicking on the respective button causes the bet per line or number of lines to increase or decrease depending on what you’ve clicked. You can also change the coin value, starting at one penny and up to £1.

The minimum stake in Ned And His Friends Slot is 30p, but you can wager as much as £150 if you like. Still, we would recommend you to be cautious if you’re intending on wagering that much. Generally, it is not wise to place a wager that exceeds 1% or 2% of your total bankroll.

At the top left corner, you will notice a Sound Off/On button. Of course, we would recommend not to turn the music off, but it’s totally up to you.

How To Win Ned And His Friends

You will notice that you’ve won because the winning symbol becomes animated after a winning spin, but let’s explain when a winning combination is activated. You will need a minimum of three (or two) instances of the same symbol across an active payline for a win. If you’ve deactivated some of the paylines and symbols are arranged across one of them, then a win will not be activated.

Speaking of symbols, there’s a door, five mice and Ned, whose face represents the most valuable symbol. You can get a maximum of 500 coins for five Ned symbols. Ned is also one of the symbols that triggers a payout with just two symbols on an active payline.

Symbols have to be aligned from the leftmost towards the rightmost reel, not the other way around.

Ned And His Friends Bonus Features

In addition to the standard symbols, you will also see three special symbols on the reels of Ned And His Friends slot, if you’re lucky, that is.

Our Ned And His Friends Review

Don’t be afraid of these rats, they are quite fun and cheerful. The RTP of Ned And His Friends Slot is 97%, higher than most other available games.

If you’re looking to play Ned And His Friends, register with one of our partner sites, claim your bonus and you can start playing right away!