Players will find a layout of four rows and five reels that spin across a number of paylines that is just enough for a thrilling reel adventure. Winning outcomes are made with at least three matching symbols, however, Primal Hunt makes multiple payline outcomes quite possible. The theoretical Return to Player (RTP) hasn't been disclosed as of yet, but players can anticipate variance that is between medium and high 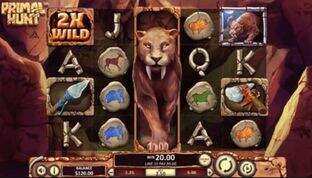 In a rare show of slots design ingenuity, BetSoft are taking the wild animal theme back to the stone age. The almost-perfect rendition of the theme makes for an exciting adventure on the reels. Players may have a close encounter with a saber-toothed cougar and the adrenaline rush thereof can get crowned with a mighty payout, as this symbols is the most anticipated one in Primal Hunt slot.

The game comes with an exciting gameplay in the base game. The expanding symbols increase the odds at landing potentially-sizeable payouts, but just in case, there are the multiplier wilds that can give any winning outcome a serious boost. A scatter symbol brings on the free spins bonus where the random number generator can shake out some exciting kickers.

In terms of graphic design, Betsoft has created a game that is visually pleasing. But that is to say the least, because the high-paying symbols can put up a visual show when they are part of a winning outcome. The big cat walks in a proud gait and the symbol where it is in attack mode would be quite charming to witness in real life.

Primal Hunt slots marks all winning outcomes by surrounding the matching symbols and the wilds in bright light. The setting takes place inside a cavern that is home to the beast and which is also frequented upon by paleolithic humans, as it can be concluded by the animal drawings and the weapons crafted out of flint and wood. Overall, Primal Hunt is fun to play and has an edgy musical theme.

How to Play Primal Hunt Slot

This reel adventure can begin with the push of the spin button, which players can find in the bottom-right corner of the screen. This action makes the reels go for one round per the active bet amount. The bet is highlighted at the bottom of the screen and players can change that amount by pressing the minus or plus arrows on the sides.

Betsoft has given Primal Hunt slot a wide range of bets in order to make possible a low, medium and high stakes gaming for any player. In the same area of the screen, the player can see the amount of the latest winning outcome, while the amount of the balance is in the windown at the bottom-left corner.

One way to enjoy playing Primal Hunt is by selecting the autoplay option. This is the smaller of the two round buttons in the bottom-right area. The menu that opens up enables players to set up the number of automatic spins and to add few optional controls that can keep give the player a prompt before the balance drops to a specified amount.

How to Win Primal Hunt Slots

Winning in the game is made possible by landing at least three matching symbols on one of the paylines. The wild symbol substitutes for all standard symbols, except the scatter, and there is also the multiplier wilds which can add 2x to the wins. This amount can grow if there is a greater number of wild symbols, since they can cross-multiply.

The low-paying symbols are royal cards and the payouts thereof are quite low as they range between 0.10x for three of a kind to figures that are lower than 1x multiplied by the bet, which doesn't return the wagered amount.

The bonus feature is the good old free spins bonus which is triggered by the scatter symbol landing in three or more positions. Players can see this outcome retrigger with another set of scatters added to the reels.

The game is going to be available as a free play demos lot following the promotional period. Players can try its bonus features and base game action with free credits at online casinos that host Betsoft games.

Overall, it is great game to play as there are lots of exciting moving parts and winning outcomes that can reach significant amounts under the right circumstances, which means a free spins bonus is followed by multiple retriggering events and multiplier wilds.

Discover the Primal Hunt slots by claiming a welcome offer right from this page and play at top rated online casinos.