One of the newest slot games that Betsoft is working on is a title that involves magic and card tricks. The game is called Stacked and it plays out on a 4x4 grid with 20 paylines. The bonus round comes with a couple of extras and modifiers from which you can win up to 664x the stake. So join the Magician who has plenty of tricks in his sleeve and do your best to win the biggest payouts. Find out more in our detailed Stacked Slot Review. 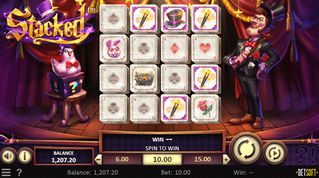 Betsoft is a popular slot developer, known for its slot games with rich visuals and innovative features, and the Stacked slot is no exception. It’s a magic-themed game that features the Magician on the right side of the screen who does his tricks to help you win up to 664x the stale. There, you’ll benefit from mystery symbols, wilds, multipliers, scatters, and free spins. Overall, this low-medium variance game provides a dynamic gaming experience so let’s see the Magician in action.

Stacked is a new online slot from the developer Betsoft. It’s a magic-themed game that is designed as a magic show. There, you’ll be playing with the Magician who, according to Betsoft, has a couple of tricks up his sleeve. All in all, you can expect to find a nice and exciting reel experience accompanied by magic tricks.

Betsoft has created the Stacked slot with 4 reels, 4 rows, and 20 active paylines. You can join the Magician on his reel adventure at bet levels that range from £0.10 to £150 per spin, so there are enough options to suit every player’s preferences. You can set your bet per spin by pressing the plus and minus buttons below the reels, and then press the spin button to start playing. In order to win, you need to land at least 3 matching symbols on an active payline, starting from reel 1.

As we’ve mentioned above in our Stacked Slot Review, the game comes with a couple of extras that are worth taking a look at. However, keep in mind that this is a simpler game where payouts of up to 664x the stake can be achieved, which might disappoint some high-rollers. The game’s bonus features include mystery symbols, wild symbols, as well as free spins with different extras. 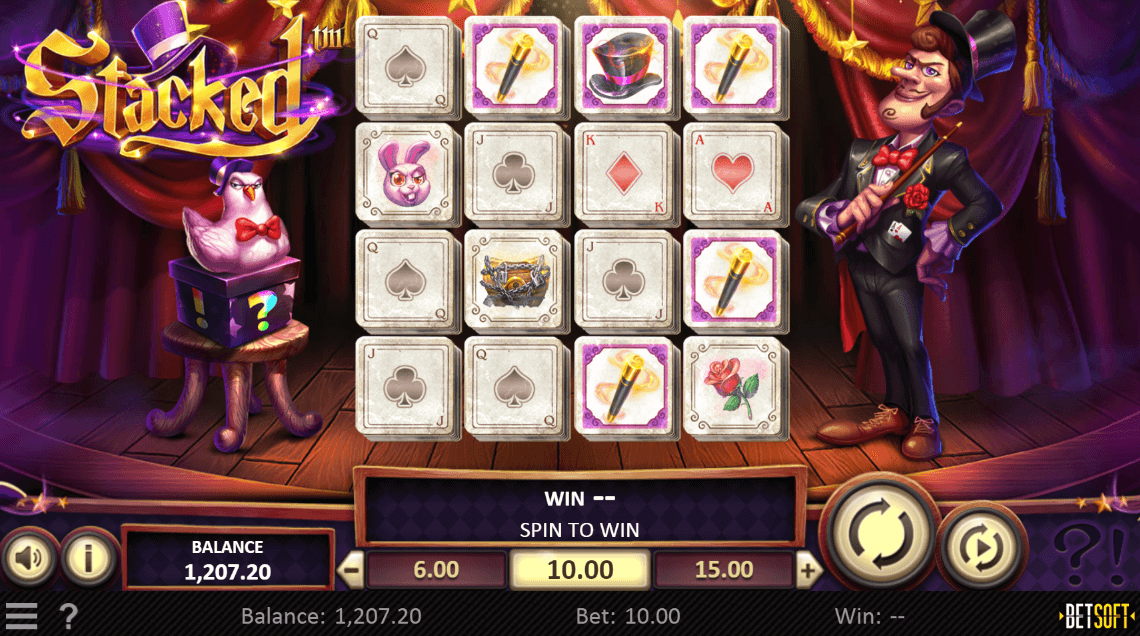 As we’ve mentioned above in our Stacked Slot Review, the game has a magic theme. You’ll be playing with the Magician who can perform some of his tricks from time to time to boost your gaming experience. The game looks like a magic show where the Magician is placed on one side of the reels, while the other side is reserved for a mystery box with a dove sitting on it. Overall, it’s a high-quality game with excellent visuals and graphics, typical for a Betsoft release.

The reels are designed as cards and they are composed of low and high-paying symbols. The low-paying symbols are the four card suits - clubs, diamonds, hearts and spades. They are accompanied by high-paying symbols which include red roses, bunnies, treasure chests, magic wands, magician’s hat, and the mystery box. The mystery box is the game’s wild which substitutes for all regular symbols to help you complete a win. It can also trigger the Free Spins feature.

The theoretical Return to Player (RTP) percentage of the Stacked slot is 96.39% which is the industry average. At the same time, the game comes with low to medium variance, meaning that you’ll land more frequent wins that are lower in value. That makes Stacked an ideal slot for players who look for longer gameplay sessions and a relaxing gaming experience. In addition, you can win up to 664x the stake, which might disappoint some high-rollers. In our Variance, Volatility and RTP guide, you can learn more about different slots models and their levels of risk.

Gameplay and Features on Stacked Slot

Since Stacked is a magic-themed slot, you can expect a lot of magical tricks to happen on the reels. The gameplay here is simple and straightforward so you’ll quickly learn how to place your bet, how to start playing and how to win. The Magician can perform different tricks and trigger the bonus features, which include Secret Trick, Fix The Trick, and Free Spins. Let’s see what they have to offer. 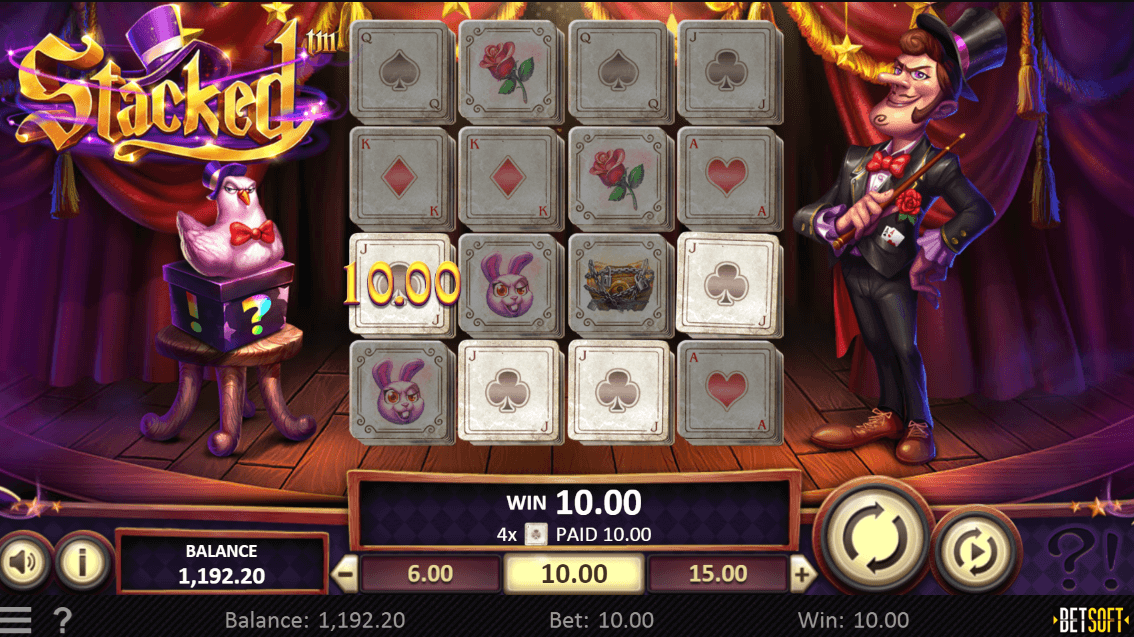 The Secret Trick feature can be randomly triggered on any spin in the base game. When triggered, it will give you a random number of face-down mystery cards on the reels. Then, the mystery cards will reveal random symbols and can help you form winning combinations.

The Magician has the chance to fix the reels in your favour and trigger the Fix The Trick feature. This feature can randomly be triggered on non-winning spins, during free spins, or during the Secret Trick feature. When triggered, the Magician will do one of the following “tricks” (or both):

The Mystery Wild symbol does its regular job of substituting for all symbols to help you complete a win. But, it also acts as a scatter and triggers the Free Spins feature. Landing 3 Mystery Wild symbols anywhere on the reels will trigger the Free Spins feature and will give you 5 free spins to play with. Before the feature starts, you’ll need to choose a number of face-down cards on the reels. This number is equal to the number of symbols that triggered the free spins. You can win one of the following extras:

The Stacked slot can be played on all mobile and tablet devices. The 4x4 layout perfectly loads on both bigger and smaller screens, while keeping the same quality in terms of resolution. The game is built with HTML5 so you’ll receive the same top-notch gaming experience on mobile devices.

Betsoft is one of the most popular names in the online slots industry which specializes in designing innovative and high-quality 3D slots. If you’ve ever played a Betsoft game before, you’ll probably want to try another one too. That’s why we would recommend you to check the Take Olympus slot from this developer. It’s a low-variance packed with multipliers, scatter symbols, wilds, bonus games, free spins, and top prizes worth up to 2,328x your stake. Another great Betsoft release is the Miles Bellhouse and the Gears of Time slot. The layout doesn't spin across paylines. Instead, players can land clusters consisting of at least three symbols, which gives you more opportunities to complete a win. Finally, we recommend you to try the Book of Darkness slot. While you play this game, you can trigger the bonus feature which is essentially a battle between two epic heroes who are vying to capture the mysterious tome of darkness.

Stacked is a beautifully designed game that once again shows what Betsoft can do. It’s a more casual, low-medium variance game that is intended for players looking to have fun rather than chasing huge wins. The magic show is well represented and the Magician definitely knows his tricks. However, the highest win in the base game is 100x the stake, so you’ll need the bonus round to win up to 664x the stake.

Play the Stacked slot and claim your welcome offer at one of our featured casinos.

Lord Merlin and the Lady of the Lake