Enter The Slotfather II: an all-time player favorite has been remade for a second wild installment offering better bonuses, amazing graphics and an excellent overall entertaining. The Slotfather II slots  has  5 reels and 243  paylines , a max coin size of 1 and a 300 coin jackpot plus re-spin trigger, plus a heads-or-tails feature that doubles your win. 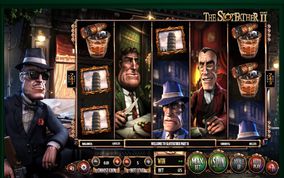 Enter The Slotfather II: an all-time player favorite has been remade for a second wild installment offering better bonuses, amazing graphics and an excellent overall entertaining. The Slotfather II slots has 5 reels and 243 paylines, a max coin size of 1 and a 300 coin jackpot plus re-spin trigger, plus a heads-or-tails feature that doubles your win.

Overview of The Slotfather II Slots

We have the pleasure of presenting the excellent The Slotfather II slots that plays on Italian mafia characters from The Godfather film series, and all the things they hold dear to their heart. This slot game is filled with cheeky humor based on the caricatured mobster stereotypes, all done in a superb fashion that makes this game so much fun to play. What is different from the first Slotfather is that you can no longer see the legendary Thompson submachine gun, the one with the round magazine, next to the spin button. We miss that for the humor, but this is a just a jest, as everything else about The Slotfather II slots is amazing, including the Return to Player ratio of 95.7% and the banging All Ways Pay paylines.

The symbols in the game are memorable elements from the aforementioned mobster theme: there is the leaning tower of Pisa, a glass of whiskey with a cigar, cards and poker chips, a wad of cash, an eerie cleaver on a chopping board (where’s my money?!) and the Slotfather character who is a well-dressed guy sitting on your left, holding a machine guy and gesticulating when you score money. 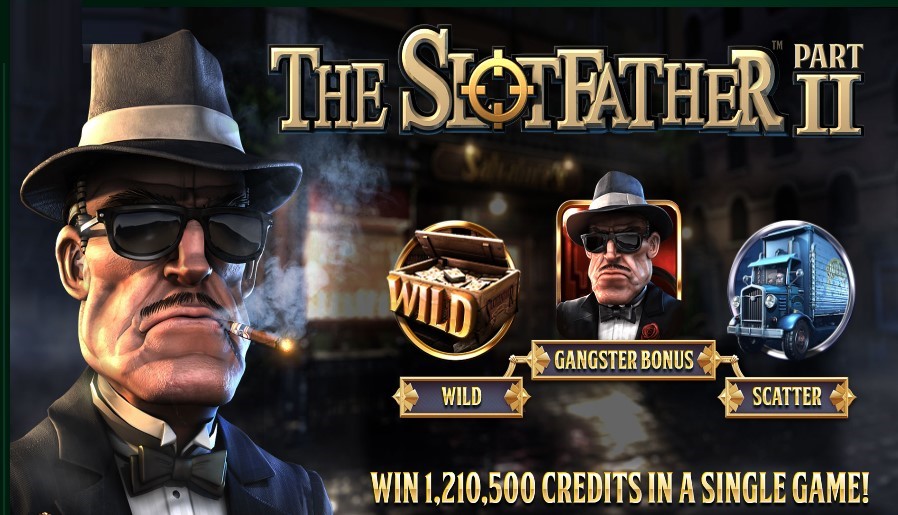 The wildcard is a crate full of cash and the scatter symbol is fittingly, a blue truck, probably full of mozzarella cheese and pizza dough, most likely a delivery for the Slotfather II Slots parlor. The remaining three symbols are three mobsters with ‘usual’ mobster names: Fat Tony, Frankie Knuckles and Snake Eyes Sammy.

The rest of the layout has the standard buttons like the Max Bet to launch a full wager for that round. The fields to the left of it are for selecting the coin size and the bet multiplier. The payboard can be viewed by clicking on the question mark symbol on the right.

How to Play The Slotfather II Slots

When you start you should select your coin size, that is, the amount you are actually wagering with each spin. The game starts with the low 0.01 denomination and can go up to 1.00 which is multiplied by the level of your bet, ranging from 1 to 5.

The wildcard is a crate full of cash, which during regular play appears on reels 2 and 4 and reels 2 to 5 during free respins. The blue truck symbol will scatter your win when you score two or more of the same symbol. Scoring three of the same symbols plus a blue truck will trigger a Free Spin, which can extend to many additional rounds (up to 20), depending on your initial winning combination and the combinations that you score during the free respins.

The Free Spins mod activates in a new screen, where the scatter truck rolls in, opens up its side shutter and starts rolling the free spins. All in all, when you score this round you will return to the base play with a hefty win. Landing one of the gangsters and getting two scatters will also result in a score. Landing two gangsters plus two blue trucks yields an even bigger win.

How to Win The Slotfather II

When any two of the mobster figures lock on an active payline you gain The Slotfather II free spins. As we said above, this feature results in subsequent respins that can lead good winnings and in addition to that, it can land you with a major bonus called the Big Bonus Boss.

After any standard win you can click the “Double Up” button that is nex to the Spin button and enter a game of Heads or Tails, where a correct guess doubles your initial win. To make things more exciting and rewarding, you can take multiple shots in the Double Up mod; each correct guess will double your previous win and that can lead to serious cash.

The three gangsters that take up two vertical squares on the reel each has a different “personality” when it comes to paying out. These symbols are part of a gameplay mod which features a desk and five folders on top, each hiding a prize. When you get three or more of the same gangster symbol you get a certain payout. The payboard says Fat Tony is slow and steady; Frankie doesn’t always pay but when he does he pays well; and Sammy is a measured risk taker. So, if you can make anything of it, it means something for the game and your winnings in The Slotfather II slots.

Our The Slotfather II Review

Playing The Slotfather II slots was a load of fun and it could have turned out rewarding in the end, but we chose to reinvest our big win back into the game. During the subsequent spins we managed to up the remaining balance to close to our initial deposit. What sustained us during the entire period were the scatter symbols which appeared regularly - and just as a reminder, two of these are enough to score you cash! So we will keep this game on our repertoire of entertaining and hi-scoring slots and will surely return to it.

The game’s developer, Betsoft, have made a great effort towards bringing a classic to the casino and slots crowd. The theoretical RTP of Slotfather II slots, set at 95.7% gives you an extended gameplay for your deposit even with a mid-to-high wager amounts. So our final verdict is, The Slotfather II slots is the slots game that you should play next.