Play on an amazing Viking-themed game by Betsoft called Viking Voyage. Five reels, three rows and ten paylines is all it takes for the Vikings to come together for a thrilling ride that offers expanding wilds, respins and x3 multiplier on the free spins game. With a top payout in the area of 5000x and bets ranging between £0.10 and £10.00, Viking Voyage slots is an excellent new game to try and possible call it your favorite. 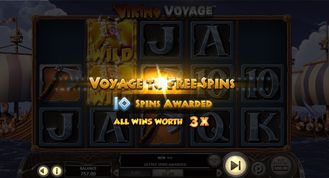 Play the Viking Voyage slot for a return of good fun on the reels in a very low-stakes game that has a top-paying symbol of 1000x.

A lively and to the point musical score and Viking galleys at sea take you straight to the time of these explorers and variors. The slot game that spins for the possible win is called Viking Voyage and was created by slots experts at Betsoft. The effect is a full-blown game with exciting features, a top symbol prize of 1000x on the line bet and the ability to buy a bonus feature.

Viking Voyage slot has been given attention to detail. The players ought to get the feeling of being buoyed by the waves carrying the ships in the background. Then there are lively animated bits that just bring an edge to the gameplay, which jumps to life with the coming of winning combinations and the expanding wild. Then, coins are thrown into the Buy Feature pot, to aid the players towards getting one for less, or potentially, for free.

How to Play Viking Voyage Slot

Betsoft have left us with enough options to make setting up the game and changing the settings if we wish, a breeze. The centrally-placed ticker that is just below the reel-set displays all of the current information, such as the latest win. Below it is the range of bets. With the biggest bet set at £10.00, it becomes obvious that this is very much a low stakes game, and thus the size of the winnings matches that foundation. But that is not to say that the winnings are utterly miniscule! With a small bet of £1.00 there are decent prizes that can be potentially won.

Besides the setting for the bets there are few buttons to be consider also. The Spin is right-center, next to the bet slider, and to the right of it is the autospin button. There is another bubble for the Buy Feature, and a tiny bubble to the left of the ticker for Double Up, which will load the gamble feature following base-game wins. The paytable displays all of the symbol pay amounts and gameplay details and it is accessed from the 'i' button to the left of the Balance box.

How to Win Viking Voyage Slots

The game has the double up feature, which is basically another name for the heads or tails game. Following any win the player can click or tap on the corresponding button and that will open up the box where the oucome could result in either losing the winnings or making them double with each right guess.

But this is not the game's main feature. There are two specialty symbols that boost the chances for landing a better win. The Raven Scatter does that to the winnings and pays 400x for five matching symbols, besides providing a strange booster.

Then, the wild. This symbol depicts the viking warrior king, wearing a double-horned helmet and looking fierce and leader-like at the same time. The Wild can expand on the entire reel with a stack of three such symbols, which additionally leads to a free re-spin based on the previous one.

As for the symbol wins, the best pay of 1000x comes with what is presumably the fiercest viking warrior. Next one over is the drawfish man and of the same value of 400x on the line bet is the elder with a spear in hand. The mid value symbols are a chalice, a helmet and a battle axe, and the low value symbols are the high cards from ten to ace but cast in a rune-stone fashion.

The Long Boat is a bonus symbol that brings about the Viking Voyage free spins game when it lands on the first and last reels at the same time. The free spins bonus round can be re-triggered with the appearing of the same combination, and what is more, the expanding wild symbol is there to aid with the wins, whenever it appears. What is more, simple to say, ALL winnings get a x3 multiplier! And, and, during the free spins the stacked wilds, if they appear, will remain on the reels for another spin!

Betsoft are a known company and they haven't passed on the opportunity to cast this game into a mobile-ready format. The Viking Voyage slot can be played on apple and android devices, from any online casino that can be loaded on the same. The same is true for tablets.

Games that are seeming awesome (judging by graphics and bonus features) often have average or low return to player theoretical outcomes. That is not the case with this game. Although it doesn't exceed far towards the best possible RTP, the Viking Voyage RTP 96.12% is above average and quite in line with the standard RTP for most slots.

There shouldn’t be much more to say. We have been left with the impression that this is a game that will find followers in the vast world of online slots. Although there are many viking-themed slots, this may as well be the only that sports this artistic style in delivering fun on the reels.

Those eager to sail the viking ship is welcome to claim a welcome bonus to one of the casinos, right from this page.