Deal Or No Deal Megaways Slot 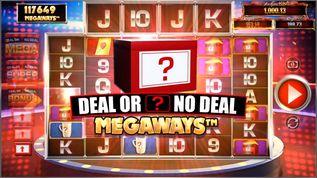 We have seen several editions of the popular Deal or No Deal television show converted into an online slot, for example, the Deal Or No Deal The Bankers Riches slot. Each game has featured the part where you talk to the banker and open the mystery boxes, but there is a game that does it the best of all. Deal or no Deal Megaways slot by Blueprint Gaming brings the TV show's action and excitement to a mobile device or personal computer near you.

Play for a chance to beat the banker and win up to 10,000x on the Deal or No Deal Megaways slot.

About Deal or No Deal Megaways Slot

Blueprint Gaming has released a version of the popular Deal or No Deal slot with the Megaways engine from Big Time Gaming. The Deal or No Deal Megaways slot comes with 6 reels and up to 117,649 ways to win. The reels are dynamic and each one can have 2 to 7 symbols, so the number of active symbols changes with every spin you make. This affects the number of Megaways (paylines) you play with. For more details, read our Megaways Overview where we explain how this mechanic works.

Furthermore, the game is part of the Jackpot Kings series of slots and it features progressive jackpots, meaning that huge prizes can be won. To start your reel adventure in the Deal or No Deal Megaways slot, make sure to set your bet level using the up and down arrows on the left-hand side of the screen. The game accepts different betting options that start from £0.20 and go up to £10 per spin. To land a win, you need to land matching symbols on an active payline, starting from the leftmost reel.

As it has become the norm for the majority of megaways slots, the winning symbols in the Deal or No Deal Megaways slot are removed and the blanks filled by new symbols. This is known as the Cascading Reels feature where continuous wins can occur from just a single spin, and there is a chance that the players get multipliers that can give the winnings a nice boost. Furthermore, you'll benefit from free spins, unlimited multipliers, as well as progressive jackpots. 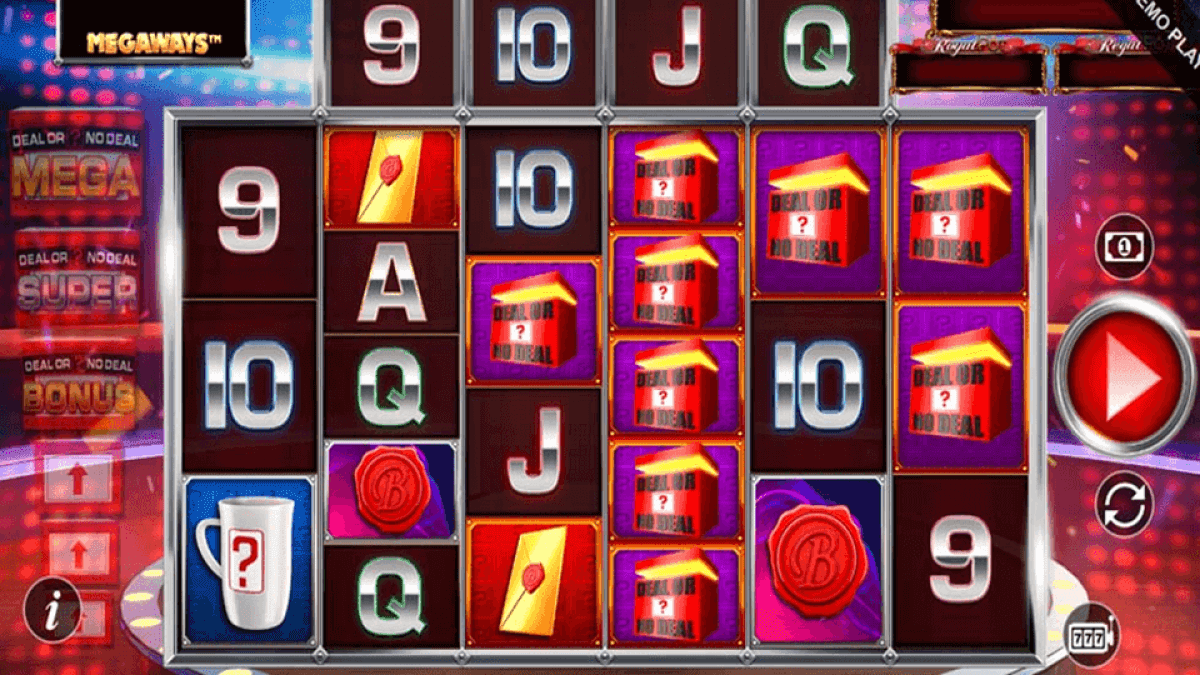 The game design features everything that is part of the popular show. The symbols are represented by objects from the show as well as the high cards. The background is familiar and there are animated sequences and second-screen events as you get to the bonuses and when you land multipliers on the Deal or No Deal Megaways slots.

The musical theme is low-key but quite on point with the gameplay. It brings back the excitement one gets while watching the action taking place on the television screen. The only difference here is that we are in the game as slots players and the prizes could be either relatively bigger, or relatively smaller, that is, if you've ever competed and revealed peanuts in those boxes. 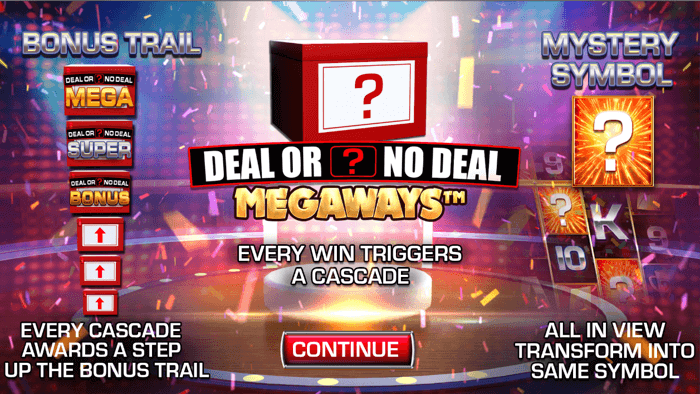 Like we said, this megaways slot stays true to the cascading wins style of play. Each winning outcome is deducted from the reel-set and filled in with a new set of symbols. The additional row of four reels on top of the slot serves to help create better and bigger wins.

The game's wild symbol substitutes for all of the standard game symbols and it stops only on the middle four reels. The biggest symbol payout comes with the Deal or No Deal Megaways slot logo. Land six of these symbols to get 50x multiplied by the winning bet.

The wins are made on consecutive reels. That means, three or more matching symbols need to fall from the leftmost reel and onwards. A symbol of the same kind can fall twice or more times on a single reel, and as long as it connects with the same kind on the next reel a win is going to be made.

RTP, Variance and Payouts for the Deal or No Deal Megaways Slot

The theoretical return to player is slightly below average at 95.72% and it is likely that most players wouldn't find any issue with it. This Megaways edition of Deal or No Deal may have warranted lowering the RTP because of the bonus feature or perhaps for the way in which the mystery symbols can reflect on the reels. There is no way to get a sense of a difference when playing the game, so we'll take it as a way of balancing out an eventual favourable bonus feature that is part of the gameplay. In addition, the game's variance is medium to high, meaning that both low and high-sized winnings are possible. Here you can read more about the Variance, Volatility and RTP in online slots and see which one suits you best.

We have seen the mystery symbol on other megaways slots. It does the same thing - reveal a random symbol in multiple locations on the reel-set. The symbol can also fall during the Banker's Mystery Spin bonus.

The main bonus of this game is the Deal or No Deal game, which is won when you make four consecutive cascading wins. In the event, you will be taken to the second screen where you can reveal an award. The greater number of consecutive wins the better terms you get in the bonus, so there is a Dear or No Deal bonus, Super Deal or No Deal and Mega Deal or no Deal.

Are we ready for the most exciting Deal or No Deal game in the world of online casinos? We most certainly are. The mechanics of the Deal or No Deal Megaways is superb and the gameplay thrilling. The bonuses reflect the excitement of the television show and the winnings are capped as most Megaways slots at 10,000x.

Claim a welcome offer to play Deal or No Deal Megaways slot at the online casinos on this page.

Deal Or No Deal Lightning Spins

Deal or no Deal Megaways: The Golden Box

Deal Or No Deal: Double Action

Deal or No Deal: Golden Game

Is Deal or No Deal Megaways different from the other DOND games?

For those who are just discovering online slots, the Megaways version of the DOND series has a significant difference in the payout mechanism. The game can create consecutive winning outcomes on up to 117,649 ways to win.

What is the Mystery Symbol in Deal or No Deal Megaways?

The Mystery Symbol can appear on multiple positions on the reel set. Each instance will transform into one symbol kind that can connect with other matching symbols for a winning outcome.

What is the Deal or No Deal Megaways Bonus Game?