The cult animated series Rick and Morty has been distilled into a megaways slot. Made by Blueprint Gaming and stuffed with intergalactic extras and bonuses, the players are looking at a maximum exposure of 50,000x on the winning bet through a dynamic cascading wins action. 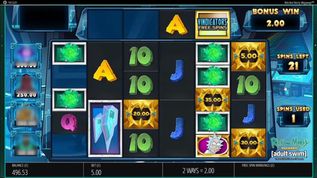 Fans of the show and slots enthusiasts can join the famous duo on an adventure at some of the online casinos available on this page.

The mad scientist Rick and his grandson Morty often go on adventures to different planets and dimensions and their latest adventure is in the world of slots.

Blueprint Gaming is responsible for releasing a number of slots, based on TV movies and shows. This software provider is also responsible for creating the Megaways versions for some of the most popular slots. And this time, Blueprint Gaming managed to create a combination of both, which goes by the name of Rick and Morty Megaways slot. Make no mistake, this game is all about the duo, who along with the accoutrements that they utilize on their space adventures, are here to help towards making the potential win outcomes.

Rick and Morty Megaways slot at hand comes with the megaways-standard six reels and the maximum of 117,749 ways to win. Cascading/collapsing wins is the name of the game in terms of the payouts and there are other extras, such as a free spins bonus that lets you choose one of four modes and ubiquitous mystery symbols that can boost the win outcomes.

You don't need to guess twice about the look of the Rick and Morty Megaways slot. There are plenty of nods to things from the animated series and a number of symbols referring to other characters besides Rick and Morty.

Blueprint Gaming couldn't have gotten away from making this a mediocre slot. To make sure they didn't, the company made a full-blown video slot with lots of animated sequences.

Each spinning of the reels results in dynamic gameplay in which payouts are celebrated by electric currents, glowing lights and plasma guns.

Rick and Morty Megaways slot has an upbeat, jazzy musical theme that wasn't taken from the series, but somehow manages to fit into the concept.

Some of the slots experts we parlay with consider another game to be of a similar disposition to the megaways engine, but we beg to differ: the Rainbow Jackpots Power Lines slot has an enticing game design and a couple of features, but megaways is a beast of its own. This is not to say that that game's 49 paylines lack any energy.

How to Play Rick and Morty Megaways Slot

Start your reel adventure with Rick and Morty by selecting your bet and then pressing the spin button. The game starts with a default bet that's been selected by the casino, however, these default bets shouldn't exceed two pounds per spin.

To change the bet, press the bank-note button in the bottom left corner of the screen and choose the amount that is preferable to your playing style. The smallest bet starts at £0.20 and the biggest bet should be capped at £20.00 per spin.

Once you are ready to play the game you can either press the spin button to spin the reels once or you can choose the autoplay mode by pressing the button in the bottom right corner of the screen.

Autoplay lets you enjoy the Rick and Morty Megaways slot hands-free which means you select the number of automatic spins and add optional stops such as top on a single win value or stop on a balance loss amount, or stop when the bonus feature is triggered.

How to Win Rick and Morty Megaways Slot

As it is the case with megaways slots, the symbol payouts are comparably smaller than regular slots, that is to say, non-megaways slots.

The biggest symbol payout comes with the top symbol, and in this game, it is that of Rick. Six of these symbols bring a prize of 50x multiplied by the triggering bet.

Most of the symbols, including all of the low-paying cards symbols, don't match the bet on the win of six matching symbols.

Cascading wins cause a sequence of payouts that don't stop until there aren't any winning outcomes. When a win occurs the symbols are deducted from the reels and replaced by a new set.

Blueprint Gaming tends to include multiple bonus features in their jackpot and megaways slots that are based on proprietary content. The same is true for the Rick and Morty Megaways slot.

The mystery symbols are an obvious extra. They can change into any symbol of the paytable, except the bonus symbols.

The scatter is responsible for triggering the free spins bonus with four symbols, or more. The free spins rounds are selected from four options, where each one is a reference from Rick and Morty episodes.

Mystery Free Spins lets you make a spin on the wheel of fortune to discover the number of free spins, between five and 50. Landing the bonus with more than four scatters can result in more free spins on the spin.

Vindicator Free Spins starts the game with the potential of landing special and bonus symbols which collect the prizes that are attached to those symbols.

Federation Wild Spins has bonus reels that become highlighted when they match the symbols on another reel. The symbols that match become wild and if it is the wilds that are highlighted, then they become multipliers.

Pickle Rick Free Spins has an unlimited win multiplier for each cascade.

The game is bound to drop as a free play or demo version, but not until its exclusive and official release period is over.

Not only is this release based on an animated series that has reached cult status, but it also carries a huge payout potential of 50,000x the winning bet. The gameplay, the amazing graphics and the exciting bonus features make this slot unique and we have no doubt that it will become a personal favourite to many players around the world. Not just Rick and Morty fans. All in all, an excellent adventure on the reels.

Discover the Rick and Morty Megaways slot by claiming a welcome offer right from this page and play at top-notch online casinos.

What is the maximum exposure on Rick and Morty Megaways?

This is one of the megaways slots with the greatest exposure, which translates to a maximum payout potential of 50,000x on the winning bet.

How many bonus features are in Rick and Morty Megaways?

The game has one free spins bonus divided into four different modes that the players can select from. Each mode offers a different reel modifier and/or multipliers.

Is there a Mystery Symbol on the Rick and Morty Megaways paytable?

There is a mystery symbol in this megaways slot, which is not the case with many others. The mystery symbol can convert multiple symbols into one of the same, which improves chances for a big win.

What is the volatility on the Rick and Morty Megaways slot?

Because of the 50,000x maximum exposure, the game has a high volatility/variance.

The game uses elements and characters from the Rick and Morty franchize under a license obtained by Blueprint Gaming. The megaways payout mechanism is under license from Big Time Gaming.