Blueprint Gaming's Return of Kong Megaways slot comes with the potential of generating up to 117,649 ways to win. This is a game that comes with a free spins bonus feature where players can have a win multiplier of 1x added for each consecutive win. Players can play the game with as little as 10p per spin. The theoretical return to player (RTP) is 96.03% and the variance is between medium and high. 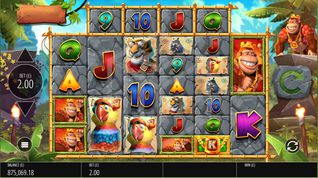 Play the amazing Return of Kong Megawaysfor a chance at the top payout of 50,000x your line bet for the spin!

Blueprint’s Return of Kong Megaways slot continues the saga of Megaways online slots in 2019. You are taken deep into the jungle where the animals are having a ball on a reel-set consisting of six reels and shifting rows. This is, of course, a Megaways slot, which comes with no less than 117,649 ways to win.

And there is a wide range of bets which make the game accessible to any animal in the jungle, along with the free spins bonus feature and other surprises that are packed in the game, such as the hefty multipliers. This is a game that plays in the cascading reels style of play, which is different from the standard arrangement that is usually found on slots of three rows and five reels.

The symbols in Return of Kong Megawaysare split into low values and high values. The group of low-value symbols consists of the six playing card symbols 9, 10, J, Q, K and A. Each of them awards certain payout for combinations of three, four, five and six matching symbols on the ways to win.

The high-value symbols in the game are on-theme and include a pirate bird, a tiger, a rhino and Kong himself. All of them pay for combinations of three, four, five and six symbols, except Kong who also pays for two.

There’s an assortment of bonus symbols in the game which include a Wild and Scatters. The banana leaf Wild substitutes for every symbol except the Scatters. It also helps you form winning combinations. The golden barrels mystery symbols, the KONG scatter awards free spins, and the golden monkeys increase the number of Megaways and awards additional free spins. 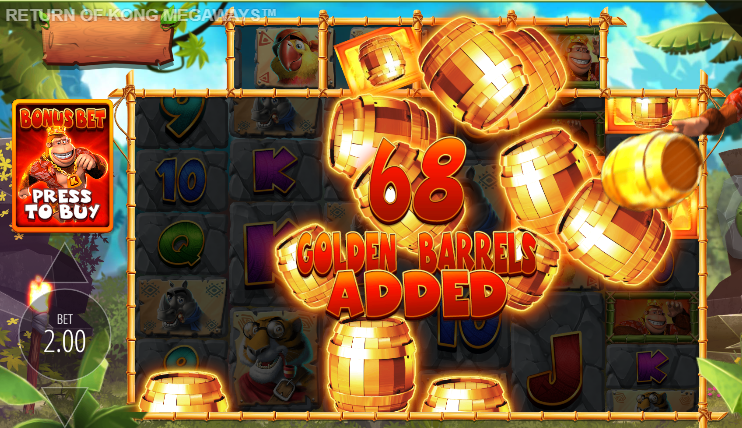 How To Play Return Of Kong Megaways Slot

Setting up for the gameplay has been made a universal approach on all Blueprint Gaming releases since a few years ago. The same old familiar arrangement is available in this game as well. There are no paylines to set because the Megaways expand and shrink depending on the number of rows and the size of the symbols. The only variable you need to set before pressing Spin is your bet.

The buttons for the bet variable are to the left of the reel set. You can increase or decrease the bet by using the up or down arrows or by pressing the Bet button. The bet range starts at just £0.10 per spin and goes up to the max of £100.00. Return of Kong Megaways offers an autospin button also which lets the players set a number of automatic turns.

Return of Kong Megaways slot is also available as a free play version. This version is almost completely identical to the real money version of the game. They differ only in one feature – the banking part. Since you are playing with a virtual balance, you cannot withdraw the amounts that you win during your play.

However, playing the free play version of Return of King Megaways is beneficial. You can set your bet for the spin, see how the game plays, how the bonus feature is triggered and even how much you’d get for different symbol combinations. Try at least 100 spins with a different bet range to see how the game reacts and how it pays out.

How To Win Return Of Kong Slots

Winning payouts in Return of Kong Megaways are awarded for symbol combinations in the base game. The low-value symbols will get you small payouts, so the high-value ones are the ones to look out for. There are some fine high-paying symbols in the game, but the most valuable symbols are the wild and the scatter.

Other than that, the game comes with multipliers but these occur during the free spins. So, let’s find out how it is triggered and what may unfold during this bonus. 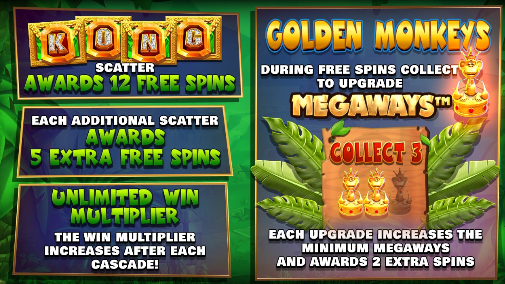 This is a base-game bonus feature which is triggered at random. On any of the spins, Kong will appear and throw a golden barrel at the reel set which could add up to 100 mystery symbols on the reels. When the spin stops, these golden barrels will transform into matching symbols to increase your chances to land a winning combo.

The most beloved, and the only one, bonus feature are the free spins. The bonus is triggered when KONG is spelt on the reels with the help of the scatter symbol. In the event, there is a sudden eclipse that dims the otherwise light reel-set and that sets the stage for what's to unfold.

The free spins come with additional features. Kong is happy to throw some barrels on the reels, just like in the antecedent arcade game, and these barrels are golden and become collected in a stash, where they are counted and added towards the total winnings.

The three golden monkeys are collected to add more Megaways and extra spins during the bonus. Three of these result in an upgrade. The Wild symbol is active during the free spins and interacts with the rest of the symbols.

Buying the bonus offers you another extra interesting option, such as the likes you only see on Temple of Treasures and Wolf Legend.  Where you can buy the bonus and then ask for the "Mystery Buy".  The Mystery buy on Return of Kong Megaways allows you to spin two wheels, one that indicates the number of spins you will recieve (Between 6 and 12) and the level on which you start ( up to 5).  The Level indicates how many megaways you will start off with!  Starting with level 5 means you will start with a minimum of 10,000 Megaways!

This online slot game has an RTP of 96.03%. This is a decent RTP since the average stands at 96%. So, you could say that Return of Kong Megaways has an RTP which is a tad above the average. This just adds to the quality of this Blueprint Megaways game.

Return of Kong Megaways has a medium to high variance level. This means that you’ll land winnings with a moderate to low frequency and they’ll mainly be moderate to low amounts. However, if you land high-value symbol combos, the payouts would be pretty lucrative.

The game has been fully optimized to play on mobile. In fact, it has been optimized for different devices, so you can spin on your desktop, tablet and smartphone. You don’t need to download any app or software. Just launch the game in your respective browser from your favourite casino and start spinning.

We love it, just like we love most Megaways slots, including the latest and greatest Fishin’ Frenzy Megaways which simply blew our mind. We hope this is not an infatuation but a solid impression regarding the Megaways wave.  Return of Kong offers the player a new alternative to games like Bonanza and other well known megaways games.

It is recommended that you try this game on free play first, even if that is through one of our partnered casinos.  As this is quite a volatile game we recommend that you start on a low stake so that you can get a personal idea of how often the game will deliver wins or the much sought after bonus.

As with all other megaways games in this market, the bonus is the key feature here.  Landing the 4 Kong Symbols is the way to gain the highest possible wins.  Buying the bonus is also possible, but should be approached with caution, as it also has the chance to fall flat.  Proceed with caution, but enjoy the game, lower stakes means more game time and a better chance for high X wins.  You can also buy the bonus in free play!

To play this and other Megaways slots, claim your welcome bonus from the casinos promoted here at Slotswise and spin for the chance to win big!

What are the Golden Monkey symbols in Return of Kong Megaways?

The game has a bonus feature where players can collect the Golden Monkey extra symbols in order to extend the number of free spins.

What is the Return to Kong Megaways bonus feature?

The game can trigger 12 free spins when four bonus symbols land across the reels. 5 spins are added for each additional bonus symbol on the triggering spin.

What is the range of bets on Return of Kong Megaways?

Players can play this game with as little as 10p per spin, while the maximum bet is £10.00 per spin. Regardless of the amount, any spin on this Megaways game can result in the maximum number of ways to win being activated.