Let the stones tumble in Temple Tumble Megaways for a chance to win up to 7800x on the winning bet. The game offers six reels and six rows that deliver too many ways to win to count. A free spins bonus is there and you can play it when the reel-set has been cleared of symbols thanks to the cascading wins system. 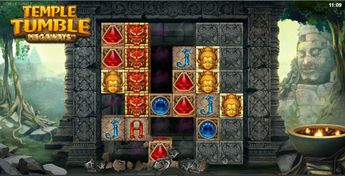 Discover the cash prizes that are hidden behind the symbol stones on the Temple Tumble Megaways slots.

Relax Gaming have created one of the most annotated slots in 2019 and it is no wonder. In the past year alone they have released Extra Chilli, Who Wants to Be a Millionaire  as well as Holy Diver, all Megaways titles.

The game at hand packs the same payout mechanism but comes with a twist which makes it just slightly different from the standard.

Temple Tumble Megaways makes its payouts on six reels and six rows, where the symbols keep their one grid square format at all times.

Wins are made with three of the same posting on consecutive reels and each outcome causes a 'collapse' which leads to a 'cascade'. In other words, more than a single win can occur from one spin.

Besides the base-game action Temple Tumble Megaways comes with multipliers and adds extra spins in the free spins bonus. The number of maximum ways to win is 46,656 and there are wild symbols that can substitute the game's symbols.

In terms of the graphics design the game at hand offers an original take on a common theme. The action takes place in a world of Buddhist temples and ruins. The background shows a misty forest and to the front is a cauldron of fire and a reel-set encased in sone columns. Everything about the design justifies the name Temple Tumble Megaways slots.

The symbols themselves are all part of this culture, as there are Buddha heads, dragon masks and a number of precious gems. The video elements have some cool details to the gameplay. Each drop of the symbols raises dust at the bottom and winning outcomes are removed by the blocks cracking and collapsing to the ground.

The free spins bonus is a second screen affair which is enabled by selecting one of those amazing stone dragons and lions.

Your adventure with the cascading spins can begin with the push of the round arrow button underneath the reel-set. This is going to send the symbols falling once, with the possibility of subsequent wins.

The bet that will be deducted from the balance is shown in the bottom left area of the screen. By using the minus and plus buttons you can choose the amount that best reflects how you wish to play Temple Tumble Megaways slot.

Bets start at £0.20 and there is a wide range before the maximum bet of £100.00 per spin is reached. To make the spins go faster you can toggle on the fast forward button green and if you wish to engage in the Temple Tumble game hands free, you can select the autoplay button, which is to the right of spin.

The game's wild symbol is represented by the adventurer's portrait, because no adventure can be without the protagonist. This symbol doesn't pay any but it substitutes for all other.

The mot valuable symbol merely returns the bet back to you when six of the same fall on the reels on consecutive reels. That symbol is the golden Buddha head. Five of the same pays 0.8x on the bet.

The red dragon mask pays 0.6x for fix and the red, blue and green gems pay 0.5x, 0.4x and 0.3 respectively. The remaining symbols are the royal cards.

In case you are wondering why these low payouts, just think the cascading wins potential and the game's proclivity to churning out blocks of symbols on consecutive reels.

The bonus is triggered when the game makes a number consecutive wins resulting from the same spin, which will in turn wipe out all symbols on the grid. This means that there isn't a bonus symbol responsible for triggering the game.

When the bonus game has been awarded the players get to choose between three modes: medium, high or extra high volatility.

In the first the reel-set yields extra spins, in the middle mode there are multipliers and in the highest volatility there are both free spins and multipliers, so the trade-off is obvious.

Relax Gaming have released this popular game as a free play demo because of the demand for it. The players can find it at online casinos that host demo slots for registered players, and this is the best way to have a look into the game before deciding to play with real money.

The game is fun to play and carries a hefty payout potential of close to 8000x multiplied by the winning bet. This is all thanks to the cascading wins and the multipliers in the free spins bonus.

Discover the Temple Tumble Megaways slots by claiming a welcome offer right from this page and play at top notch online casinos.