In terms of layout and game specs, Mythical Treasure slot comes with three rows and five reels that spin across 25 paylines. Winning outcomes can form with three or more matching symbols and players can make the reels spin with at least 25p. What is more, the game at hand has a cascading wins payout system which means winning outcomes don't stop at one. The math model has low to medium volatility, however, the theoretical return to player hasn't been released yet. 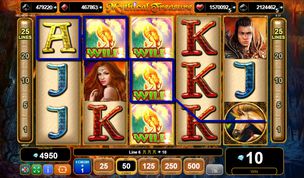 EGT is a company that's known for making game cabinets as well as slot games that are fed into those cabinets and made available at land casinos around the world. The present game has been made into an online slot and represents one of EGT's better releases in 2020. Yes, it is a new online slot and belongs to the style of slots that tell a story of an epic kingdom, its heroes and beasts of war.

In terms of features and gameplay, EGT Interactive has inserted a couple of features that can raise the excitement in the game with the help of the scatter symbol, which can only mean a free spins bonus. Mythical Treasure also comes with a wild symbol that can substitute for all of the standard paying symbols but it is not a paying symbol. On the other hand, the wild can substitute for the two highest-paying symbols of the game.

Design-wise, the game game offers a view into a mythical realm where lions have rainbow manes and horses are actually unicorns with a golden horn and gryphons are almost like pets that you can keep in your home.

The art is quite beautiful but we couldn't help but notice that the main hero has a striking resemblance to a certain Hollywood actor with a last name Pitt.  Maybe they traced the contours, maybe someone just drew an awesome picture, but nevertheless, the drawings are top level.

What is more, the high-paying symbols are animated too, which adds an extra element of excitement to the gameplay. Mythical Treasure slots is overall well-designed and has a good dynamic to it, but we find it unique that the gameplay slows down when you enter a string of cascades, which is a nice touch that makes it different from many other games.

How to Play Mythical Treasure Slot

The gameplay can begin with the push of the spin button which is not your typical button. If you are looking for a circular or square thing you won't find it as there are five buttons in total that can cause the reels to spin.

These are the squares at the bottom of the reel set that carry a bet amount that is preset and that rises with the selection of your total bet amount, or rather, your stake per bet. The range of bets starts at 25p per spin and ends at a maximum of 50 pounds or your casino's currency.

When you open the paytable by pressing the i button, the winning outcomes that are displayed on it change as you change the bet selection, which is a nice way to view what you;d be playing for with the specific selection of the bet.

Last but not least, the Mythical Treasure slot displays the usual EGT Interactive jackpot prizes at the top of the reels. There are four of these and they scroll live as you are playing the game, and any of these can drop from any spin.

How to Win Mythical Treasure Slots

In terms of the winning outcomes, players can land cash prizes with three or more symbols of the same kind. There are two categories in this regard - high paying and low-paying symbols. The latter category consists of the royal cards and the picture symbols are represented by the mythical beasts, the prince and the princess.

Mythical Treasure slot has few symbols that can pay more than the bet when you land three of a kind on a payline. These are the lion, the princess and the prince. Most valuable payout is for five prince symbols - 1000x when you play a bet of 25 credits and the princess can pay 25x, 100x and 500x for the same bet amount.

In terms of bonus features, the scatter symbol appears on the first, second and third reels and triggers seven free spins. The scatter represents the castle from where this magnificent realm is being overseen and fittingly, it is the bonus symbol.

A curious fact is that the bonus can trigger from any non-winning spin, even when there aren't three scatter symbols on the reels. Also, the game can retrigger the bonus because the bonus symbol is present during the feature.

EGT Interactive has provided a free play demo slot of this game that enables players to experience the bonus feature, the cascading wins payout system and the wonderful graphics with free credits.

The game may not have many features but the free spins bonus seems to suffice. It is a way of landing wins at a smaller cost, but also is the cascading wins system in the base game. The math low to medium model is quite rare today and it shows very well during the gameplay. An alternative game to this one, and one that offers a similarly-exiciting premise, is Red Tiger Gaming's Clash of the Beast slot.

To discover Mythical Treasure slots choose one of the welcome offers, claim it and play at one of the best casinos on the internet.