Players will find a reel set of four reels, three rows with 100 paylines. The latter detail is quite interesting because it is rare to see a slot game that specifically has 100 lines on which three or more symbols can form a winning outcome. The theoretical return to player of this game is 96.00% and winnings can consist of the game's low and high symbols. 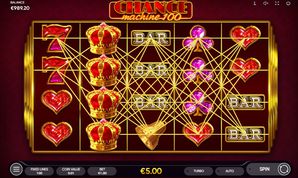 Chance machine seems to be a fitting name for this game, released by Endorphina in 2020. The game is a well-made retro-themed slot that conjures up some magical symbols to make winning outcomes, which can reach up ti 3000x multiplied by the winning bet.

The symbols can join in kind to make wins in a reel adventure that only has a base game, even though there is a scatter symbol. That symbol can pay scattered wins but it doesn't trigger a bonus game. Chance Machine 100 slot is a rather simple game where the second extra symbol is wild.

the slots experts at Endorphina have made one of their signature slots that has very nice graphic qualities. Every symbol on the paytable is well-made and is animated. When they ar epart of a winning outcome, the symbols spin in place and sparkle because every one of them is made of diamonds and precious gems.

Chance Machine 100 slots doesn't try too hard to convince the player that it's a good game because of the graphics. There isn't much going on in terms of extra features, so the base game has been made to appear quite appealing, and there can be a lot in terms of payouts thanks to the 100 paylines.

How to Play Chance Machine 100 Slot

Setting up for the gameplay requires first and foremost to select the amount of the wager. To do this, players need to press on the Coin Value button in the bottom left area of the screen. This impacts the total bet amount which is displayed in the button titled BET.

The smallest bet in Chance Machine 100 slot is one pound, which comes by way of one penny for a coin value being extrapolated across all 100 fixed paylines. At this level, players can raise the bet by pressing the BET button. There are ten levels so the penny per payline bet can reach a maximum of £50.00 per spin, with a top coin value of 0.10.

To configure the Autoplay function with more options the player needs to go through the menu button and by selecting the Autoplay tab. There are several options that are available now, such as to stop the autoplay on a balance decrease amount or balance increase or a single win amount.

How to Win Chance Machine 100 Slots

Winning outcomes are created by at least three matching symbols. One symbol can make wins with two of a kind, and that is the most valuable symbol on the paytable, the hot red seven.

The wild symbol is a crow. It can come stacked on a full reel. This symbol doesn't carry a cash prize on its own, but it helps to substitute for any of the standard symbols.  It can only occur on all except the first reel.

In terms of value, Chance Machine 100 slot has the red seven at 30x as the biggest payout based on one symbol kind. Wins with four equal 2x, three pay 0.5x and two symbols pay 0.1x multiplied by the bet.

It is made obvious by the paytable that the outcomes that are really worth it are those with five of a kind. Wins with four pay amounts that can tally up to something worth counting when there is a reel of stacked wilds and multiple payline payouts. These can accumulate into bigger wins, so there is balance in this game right there.

There isn't a bonus game and no reel modifiers. In that regard, Chance Machine 100 is as retro as they come. The scatter symbol, which is a burning star, can do one thing only and that is pay scattered amounts.

So when it falls in any three, four or five positions on the reel set, payouts with the star symbol equal 3x, 20x and 100x respectively. This is in fact the most lucrative symbol on the paytable, but also one that comes on on few occasions per every ten spins.

Endorphina has made the game available as a free play demo slot that players can try with free credits in order to get a feel of the rhythm and the general look and feel of this Chance Machine.

The game can’t generate those that we call ultra big wins from a single spin because there aren’t any extra features, unless, the entire reel set is covered by one of the few high-paying symbols. Every other winning outcome makes its strength with the help of the stacked wilds. If there is a good order of symbols, the 100 paylines can capture a lot of cross-payline wins, so the game can still make payouts that are quite decent.

Claim a welcome offer from this page and discover Chance Machine 100 slots at top-rated online casinos.