Experience a thrilling dice game on the reel-set of Lucky Dice 1 slot. This is a 40 selectable payline game that can take bets that are as low as 0.01, with a highest wager per spin of 4.00. There are multiple symbols that pay decent amounts, with the scatter paying 2000.00 when five land anywhere on the reels. The game doesn't have a bonus feature, however, there is a risk game where you can double your winnings with each card that tumps that of the dealer's. The Lucky Dice 1 RTP is 96.00% 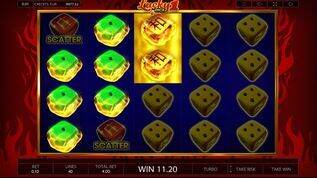 Experience a thrilling dice game on the Lucky Dice 1 slots. Play for a chance to win many prizes, including the top payout of £2000.00.

Dice have been around for at least a couple of millennia and dice games are popular around the world to this day. There are so many games in this category that there are even local specific variants, such as the Chinese Liar's Dice or the Gourd Crab Shrimp Fish dice game in Vietnam. So it is small wonder that we have seen more than several games based on dice in the world of online slots.

One such is Endorphina's Lucky Dice 1. This is a standard reel-set of five reels and four rows that have all the dice in the world spinning towards a potential payout. The different variants of dice, such as those with standard pips and those with Chinese characters, interact towards the potential wins.

The Lucky Dice 1 slot has a total of 40 payines, however, these aren't fixed, which means the players can select how many they want active during each turn or period of play. This opens up the possibility to select a bet per spin from a very wide range of options. Since Lucky Dice 1 has been optimized for mobile, this game can be taken on the go, on your mobile or tablet device.

How to Play Lucky Dice 1 Slot

Set the reels in action with the push of the Spin button. This will set the reels in motion for one turn on the number of selected paylines. The amount of the bet that is spent per each spin can be seen from the Total Bet window which is underneath the second reel.

In order to change the bet use the BET window which is located in the bottom left corner of the page. By clicking once the bet will change its amount, as the setting is for the amount per each payline. In the most inexpensive variant, the bet on the Lucky Dice 1 slot will cost just a penny. That is one penny in the bet window with one active payline on the slot.

The most expensive bet, on the other hand, is only £4.00 and on a coin per line amount of £0.10. This allows anyone to play the game even on the highest bet, or tone down the coin size and still enjoy the reel action on all 40 paylines. Since the bet can be changed very quickly in just a few clicks, the betting invites a dynamic reel action towards the potential big win.

How to Win Lucky Dice 1 Slots

Set the game in autoplay mode or hit the Spin button each time you're making a bet. This is the way to play the game. The symbol wins can be found in the paytable, and this piece of the slot game can be accessed from the menu button, which is in the upper end are.

All of the symbols are dice, as we said, but there are dice of lesser and greater value. The most valuable one is the scatter, and that is the die with Chinese characters that glow golden. This is the Lucky Dice 1 slots scatter symbol and pays £2000.00 when five land anywhere on the reel-set on a bet per line of £0.10 which is the highest wager of £4.00.

This is followed by the red Chinese character die that pays £100.00 when five of the same land on a payline. The rest of the dice pay £30.00, £20.00 and £10.00 in the highest instance of matching symbols. The Wild symbol is there to substitute for all of them, except for the scatter. That symbol is represented by the word Wild on a gold background and a corresponding die.

The game doesn't have a bonus feature or any reel modifiers. In that regard it is a classic online slot that delivers the same exciting reel action. The existing of the scatter symbol may suggest there could be Lucky Dice 1 free spins, however, it doesn't result that kind of bonus, it simply scatters the winnings and is the most lucrative symbol.

There is a risk game that the players can activate following each winning outcome. Basically, this is a modified game of Blackjack, where the player flips a card which has to be higher than that of the dealer.

Chose one from the four cards and if it beats the that of the dealer's the winning outcome from the previous spin will be doubled. The joker is also present and it beats all other cards, however, the caveat is, the dealer doesn't get to turn up any jokers.

The game has been given a theoretical return to player that is higher than the average, at 96.00%.

Endorphina Games optimize all of their releases, including those in the Lucky Dice slot series. The game plays on android and apple mobile devices and tablets. As long as your online casino can launch on mobile, the game will play as well.

Here is a simple yet exciting game coming from a proven provider. The four rows and five reels bring on a standard reel-set that spins across the changeable pay lines, and with the possibility of a big win at £2000.00.

Play this slot game for fun or for a potential cash prize. Claim a welcome offer to one of the casinos on this page to start your adventure.