The Lucky Dice 3 slot by Endorphina is a three-reeled cousin of its cousins, Lucky Dice slots two and three. The game has five paylines that can be selected and bets that range from one penny to 50.00. There aren't any bonus features and there isn't a wild symbol, with the only additional feature being the risk game, where the players can double their winnings. 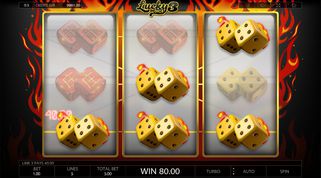 Play the Lucky Dice 3 slots for a chance to win a sum up to the highest payout of £7500.

Those players who are into classic and retro games, especially such having to do with dice, will know that the Lucky Dice 3 slot has been release as the last installment of the Lucky Dice series. This time around, and unlike the previous two editions, the reel set delivers a truly classical and retro look and feel with its three rows and three reels.

The number of paylines stays 5 as is the case with slots of this layout, and that is the same number such as in Lucky Dice 2. Nevertheless, those who can appreciate a 3x3 arrangement on the reel-set will certainly find this game entertaining and potentially rewarding, with its payouts delivered with three matching symbols on the line, along with the multipliers.

The reel action on the Lucky Dice 3 comes with five always active paylines and there is also the possibility to opt for the risk game following each winning outcome, which provides us the chance to double the winnings and then double each subsequent outcome on that round.

This time around, and unlike the first installment of this game, we don't get the benefit of a wild symbol, and there isn't a scatter either, however, there are multipliers of x2 that come in different colors, according to the dice symbols.

How to Play Lucky Dice 3 Slot

Before you set the reels spinning on this slot, you should check out the size of the bet, which is displayed in the Total Bet window under the first reel. The value that is in there can be changed by changing the values of the BET, which is to the left of the Lines window, and the number of bets, which is a setting tucked in the upper left corner of the game.

Up there the values start at 0.01 and that is for the coin size. This is the smallest value, while the biggest is one, and that is one coin per the number of times that are selected in the BET setting. So, if you choose 0.5 in the upper left corner and a bet of 1.00, the total bet will be 5.00. It may seem a little bit confusing to new players, but worry not, everything is automated so it is just a matter of playing with these figures, which displays the total bet per spin in the corresponding window.

The bets affect the amounts of the winning outcomes, as is always the case, and that is reflected in the paytable which displays all the symbol wins. To access the paytable hit the three-dash menu button which has a tab for the paytable, in order to view the prizes and information about the gameplay on the Lucky Dice 3 slot.

And if anyone wants to let the game turn its wheels and not interfere in the process, there is the Autospins button, located to the left of the Spin button. This helps to just kick back and relax, however, do mind that each turn will deduct the amount for the total bet that has been specified before selecting this option.

How to Win Lucky Dice 3 Slots

The symbol wins in the paytable are displayed according to the selected bet, and since the bets range between one penny and 50 pounds, we will select a value that is a medium bet, that of 5.00 per spin. In the event of three matching symbols on a payline the most valuable symbol is the red dice with Chinese characters on it, paying £750.00.

This symbol is followed by the second Chinese characters dice in yellow color, which pays £200.00, and that one is followed by another pair of dies that pay £60.00.

All of the remaining symbols pay £40.00 except the red dice which pay £5.00. Furthermore, the game has a x2 multiplier that corresponds to one of the dice colors for those that pay £40.00, and these are the purple, ochre, brown and blue dice.

The game doesn't have a bonus feature game. So, no free spins or pick-me games, just the good old reel action on three reels and three rows. However, in addition to this there is Risk Game, otherwise known as the Gamble game.

The players can activate the risk game following each win. The button to the game will lit, as well as the button that claims the cash.

The objective of the game is to flip a card that is higher than that of the dealer. The game does deliver a joker, which is stronger than any other card, and the best thing about it is, it can only benefit the player and not the dealer.

The Risk Game has a return to player average of 84.00% which is amazing

Endorphina are a well-known developer and they have almost all of their slots optimized to play on mobile. This is especially true for the new releases since two years ago. That way, the Lucky Dice series has been optimized and will play at your online casino, if it can launch on an android or apple device.

Just like the previous two editions, we find this one charming as well. It is a rather simple game. No much going on except reel action that is much alike that of the classic slots on the casino floor. The pays are quite decent then, and the lack of bonus features may not be a setback after all.

Start your Lucky Dice 3 slot adventure by claiming a welcome offer to one of the casinos on this page. Play with either bonus spins or bonus cash or both.