Discover the thrill of being in the Colosseum amongst a gladiator fight. This one is not life-threatening though, as it is a slot gme by iSoftBet that has six reels, three rows and 10 always active paylines. The game offers a bonus feature that doesn't need to be triggered by a bonus symbol. See a stack of the same gladiator symbol on a reel and get a re-spin with a sticky wild. Gladiators go Wild slot has a top payout of 4000x. Discover a welcome bonus and play the game. 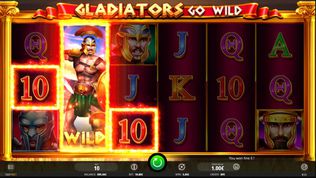 Enter the Roman Colosseum when you play Gladiators go Wild slot - a six-reel game with four wild symbols and lots of surprises.

A slot game filled with a band of gladiators, ready to take on the reels and bash the hell out of those symbols, in order to turn them into winning combinations. This is the premise of the Gladiators go Wild slot, which is a six-reel game with three rows. The four wild symbols and the concept of the game were invented by the slots experts at iSoftBet, a company that is known for making quite decent slots. This game takes us back to the days of Rome, when the masses were offered entertainment by the government, at the expense of some mighty men's lives. The gladiators fought, man died, but some reached glory and walked free.

Here we have four symbols of such warriors and each one substitutes for any of the symbols, which include the high cards for the lowing paying category and the four gladiator symbols that represent the high-symbol category. It would have been splendid if the developers had made each of the different wild symbols come with a specific boost or modifier on the reels, but no, we just have standard wilds that merely substitute for the other symbols. There are few other Gladiator-themed games, such as the cartoonish yet very popular Centurion slot, but this game is a thing of its own with a feature that doesn't repeat in other slots.

The game offers a decent range of bets but doesn't stray into the territory of exorbitant sums. With ten always-active paylines, all that needs to be done in order to set the reels going is select a coin value, which is going to determine the amount of the bet per spin. The smallest coin value is one penny and extrapolated across ten paylines this brings about a total bet of £0.10.

The biggest coin size is £1.00 and that comes around with a £10.00 bet per spin. Many will wonder, why such a low high-stakes maximum bet on this game? Well, many online slots developers have begun limiting the range of the high-stake bets in order to create a more responsible gaming environment, and we're all for it!

There are few other buttons in the game that can help with the gaming experience: the autoplay button and the paytable. The former enables the players to specify a number of automatic spins. There are few options within this control - to set the number of spins, to set a condition when the auto spins ought to stop and to set a loss limit.

The paytable is another useful thing in Gladiators go Wild slot, as it opens up a view into the symbol pays and provides information about the bonus features. There are few other minor things, such as controls to turn the sound on and off and a button to put the game into a fullscreen mode.

A mighty musical score sets things in motion. A row of trumpets and horns does well to bring on an atmosphere that reminds of an epic Hollywood movie. In that regard, iSoftBet have tried and done well. When it comes to the total prize, that is, the cap on the maximum, Gladiators go Wild slot has it at 4000x multiplied by the line bet - not half bad at all, but it is not easy to determine the game's variance, which is the frequency of pays.

The symbol pays in the best instance of five matching seem to be worth twice the subsequent best outcome of four, so in that regard, let's give ourselves the freedom to surmise that this is a low to medium variance slot. The medium part has confirmed in the few hours of play, so we'll retain that notion until our slots experts are proven otherwise.

The name is called that because a stack of gladiators on a reel results in that reel staying wild for another turn. If another stack of the wild symbol occurs on the reel it will remain sticky for the following turn. Each reel can become a sticky wild, hence the name of the game is Gladiators go Wild slot

Besides this, there isn’t another bonus feature, meaning no free spins, although, the occurring of subsequent gladiator stacks does trigger a single re-spin, and these could go on for a while, but nevertheless, this isn’t a bonus symbol triggered game.

The team at iSoftBet are on the mobile wagon and it couldn’t be any other way. Any online casino that holds this game and which can be loaded up from a mobile device is able to also deliver Gladiators go Wild. The players can play this game on most smart devices with the six-reeled layout optimized to fit almost any screen size.

Many players browse online slots according to the return to player theoretical outcome. Even though this is a long-term calculation, meaning the stated outcome may come to realization following an indeterminate number of spins on the game, the RTP does provide a look into the game. The Gladiators go Wild RTP has been set at one percent above average at 96.00%.

We would have approved of this game fully had there been a bonus feature with free spins. That would have made it all different enough to make the game fully enjoyable. But that doesn’t mean you shouldn’t try it. Maybe you’ll get more than one stacked Gladiator wild on the subsequent turns and go on a row with the wins.

To play Gladiators go Wild slots you can start right here by claiming a welcome offer to one of the casinos on this page.