Taka trip to Neverland and join Peter Pan in his fight against Captain Hook! This iSoftBet's slot comes with five-reels, 20-paylines, two in-game modifiers, two exciting free spins features, as well as a Lost Boys Treasure Chest bonus. Available on all devices, you can spin the reels between £0.20 and £20 per spin for the chance to win a 500x your total bet. 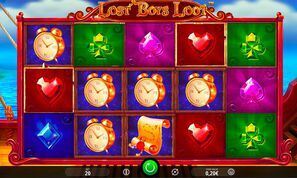 Lost Boys Loot slot is the latest game from the studios of iSoftBet. It is a five-reel, 20 payline online slot based on Peter Pan and his Lost Boys. It is compatible with all iOS and Android devices and you can play from 20p to £20 per spin. The game comes with two wild modifiers, two free spin features, and increasing multipliers. The regular winning potential of the game reaches 500x your total stake with a theoretical potential multiplier of up to 8x during free spins which could get you 4,000x.

The action in Lost Boys Loot slot takes place aboard Captain Hook’s pirate ship. The five reels are placed within a wooden frame with the game logo at the top of the screen. The entire reel set is placed against a background depicting the pirate ship with the ocean in the background. The game buttons are placed at the bottom of the screen and marked well.

The symbols in Lost Boys Loot are split into low values and high values. The low-value symbols include the four playing card suits diamonds, clubs, spades and hearts. Each of them awards payouts for combinations of three, four and five matching symbols.

The high-value symbols are theme related and include a treasure map, a clock, and three of the Lost Boys. All of them also award payouts for combinations of three, four and five identical symbols on a payline.

Since the 20 paylines are constantly active, all you need to set before spinning the reels of Lost Boys Loot slot is your total bet for the spin. When you press the coin stack symbol, a menu opens where you can set your coin value. The minimum value is £0.01 ad the maximum is £1.00 which give the values for the total bet of £0.20 and £20.00, respectively. Once you’ve done this, all you need to do is press the green spin button in the bottom centre of the screen.

If you want to spin automatically for a certain number of rounds, press the play button to the right of the spin button. Here you can set the number of auto spins as well as some other additional settings.

Lost Boys Loot is also available as a free play. If you want to try the gameplay before registering an account with an online casino, you can do this by spinning on the free play. It is almost identical to the real-money version of the slot. However, because you’re playing with bonus funds, you cannot withdraw your winnings from the game.

How To Win Lost Boys Loot

Payouts in Lost Boys Loot slot are awarded for landing symbol combinations on the paylines. The amount depends on the type of symbol and its number. The three Wild symbols also help you form a winning combination. The highest payouts in the game are awarded by the Lost Boy with a fox costume with 40, 100 and 500 coins for three, four and five matching symbols, respectively.

There are two reel modifiers that are triggered at random during base game spins:

The feature is triggered when three or more Pan symbols land on reels one, three and five. Three, four or five Pan symbols will get you 10, 20 or 30 free spins, respectively. During the feature, the stacked Captain Hook wild can appear on any of the reels. When this happens, the multiplier will increase by 1x each time it appears. If both Captain Hook and Peter Pan appear on the reels at the same time, they will duel which will result in an additional free spin or an increased multiplier.

This feature is triggered when the stacked Hook wild lands on the middle reel. The reels spin and you can get 5, 8, 10 or 12 free spins. Hook fires off traps onto any winning symbols and locks them into place.

This one is triggered when the treasure chest bonus symbol lands anywhere on the reels. You select three chests to win a cash bonus or gain entry to one of the free spins features.

Lost Boys Loot slot comes with an RTP of 96.01% which lists the game as an average RTP online slot.

Lost Boys Loot is an interesting title from iSoftBet. It is packed with bonus features, so there’s always something happening on the reels.

If you want to try Lost Boys Loot slot, claim your welcome offer from the casinos promoted here at Slotswise and spin the reels of Lost Boys Loot for the chance to win big!