The game comes with six reels and rows that can shift between two and seven, depending on the grid squares that they occupy. Typical for the Megaways engine, this game too can open up to 117,649 ways to win. The players can win prizes of up to 10,000x on a high variance game that has a theoretical return to player of 95.98%. 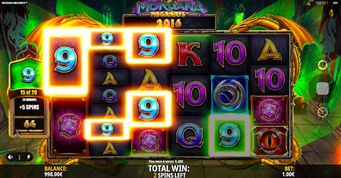 iSoftBet have created a stunning megaways slot that approaches that system from a slightly different angle. In a turn for the better, the bonus feature can result in all symbol kinds remove from the reel-set in all coming turns by stashing them and rewarding extra free spins. But before we get to that part and the rest of the extra features, we'll draw the outline of the remarkable Morgana Megaways slot.

One thing that is strikingly absent from Morgana Megaways is the cascading wins payout system. Unlike most megaways slots, the game does not have it, neither in the base game nor in the free spins bonus. We can say this is compensated for by the somewhat stronger symbol payouts compared to slots that have cascading wins, but also by the symbol collecting feature in the free spins bonus.

The game can bring on a wild reel adventure nevertheless, and it has a theme and graphic design that are done extremely well.

Design-wise we have an excellent rendition for a megaways style of slot. From the look of it Morgana is a sorceress wielding magic powers over dragons. The symbols on the reels are precious stones, dragon eyes, and Morgana's portrait. In the low-paying symbol, category are crystalline renditions of the royal and high cards, nine to ace.

Morgana Megaways slots has an everlasting dynamic to the gameplay, as the background is the inside of an ivory tower, teeming with magic substance and fire. On the reel-set, wins are marked by magical force surrounding the symbols and big wins are announced in an appropriate manner.

The soundtrack to this reel adventure is an epic cinematic piece of music that brings more drama to the gaming experience.

How to Play Morgana Megaways Slot

iSoftBet has stuck to their classical layout for the controls and buttons, so there are two places on the screen where the players will find the buttons: right of the reels and bottom left corner.

The spin button, autoplay and bet selection can be done on the right. Spin is in the middle and is bigger than the other two buttons. To play the game hands-free the players can open up the autoplay menu and select from the automatic spins presets. There are few optional settings which include placing limits on the spending while in autoplay.

Before making any moves on Morgana Megaways slot it is best to select a wager first instead of rolling with that which has been set as default bet by the casino. Choose your bet by selecting the poker chip button. The range of amounts begins at 20p per spin and ends at £20.00, which is quite comfortable and not so steep.

And lastly, to change some settings use the speaker, thunder and 'i' buttons in the bottom right. These stand for the sound setting, paytable and the fast spins option.

How to Win Morgana Megaways Slots

Wins in the game are made with at least three matching symbols, while the best payouts for each respective symbol kind are made with six. There is a wild symbol that substitutes for any of the symbols, except for the scatter.

We mentioned that Morgana Megaways slot doesn't make cascading wins but it does have a bonus buy feature which triggers the free spins immediately. The bonus comes with improved odds at landing wins and there is an extra feature within it that can make possible big wins to occur.

In terms of payouts the most valuable symbol is that of Morgana, paying 50x multiplied by the winning bet for six, 25x for five, 10x for four, 5x for three and 2x for two symbols. The dragon eye pays 5x for six and 2.5x for five and so on.

The game has two features that can trigger randomly in the base game. The Max Megaways is a modifier that causes the number of megaways to lock on the maximum of 117,649 on the next spin.

The Mystery Symbol can stop on multiple locations and turn into any of the game's symbols. During the free spins mystery symbols tend to transform into the symbol kind that is in the process of getting cleared.

The bonus game begins with three scatters, which grant a not so lousy 10 spins. Four scatters trigger 15 free spins, five bring about 20, and six the maximum of 30 free spins that initiate the feature.

The free spins also come with another feature where each symbol on the paytable is part of a clearing game. Starting with the nine, if that symbol appears 20 times on the reels, the game will remove it from the reel-set completely and resume with the next symbol, 10.

Each time a symbol is removed, Morgana Megaways awards prizes that progress in heft, giving free spins and locking the number of megaways.

For example, when the K symbol is cleared, the players get 40x multiplied by the bet, three free spins and at least 2000 megaways active at all times.

If the K is cleared, next comes the A, in which case the game provides another set of benefits.

The game is made available as a free play demo slot at online casinos that have practice play games. This enables the players to try any game for free.

The megaways engine began turning up some mediocre releases but this iSoftBet release breaks with that trend. Thanks to the two reel modifiers in the base game and the extra feature in the free spins bonus, the game offers more than your typical megaways slot.

Most new Megaways slots hide a good reel adventure within. Another slot with the same payout mechanic but a completely different theme is the 1 Million Megaways slot by IronDog Studios. It may not have the look and feel of Morgana, but it does come with win multipliers and a free spins bonus.

Discover the Morgana Megaways slots by claiming a welcome offer right from this page and play at top-rated online casinos.

What is the Morgana Megaways slot about?

Morgana Le Fay was a sorceress in the legend of King Arthur. Her presence of the reels of this megaways slot can, likeways, turn into some magical winning outcomes.

What is the Morgana Megaways RTP?

The game has a solid theoretical Return to Player potential of 95.98% which is within the industry's average, while the volatility of the math model is high.

Where can I play Morgana Megaways?

The game is available at reputable and licensed online casinos, such as those that have been reviewed on SlotsWise. Morgana Megaways demo is another way to try the game for free, however, the winning outcomes are not going to result in real cash winnings.