Thunder Shields is a new online slot with a Viking theme from iSoftBet with five reels and 40 paylines. Providing high-quality design and exceptional graphics, this game comes with a number of impressive bonus features, including Mystery Spins. Moreover, the game is part of the iSoftBet’s Hold & Win series, which relies on fixed jackpots and re-spins. Find out more about this interesting online slot in our in-depth Thunder Shields Slot Review. 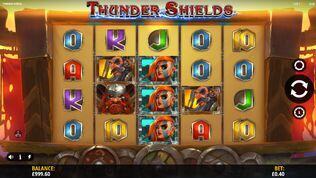 iSoftBet has come up with a new addition to the Hold & Win series of slots - the Thunder Shields slot. For this game, the developer decided to use a Viking theme where you’ll find many warriors with their ships. So, when you play the Thunder Shields slot, you’ll join the Viking gang and make your way up to Mystery Spins, Colossal Respins, and the Thunderstorm jackpots with top prizes of 4,035x the bet.

Thunder Shields is another addition to the developer iSoftBet’s Hold & Win series of slots. For this game, the developer is taking players to the high seas, offering them to join the Viking gang on the hunt to riches. The Thunder Shields slot is played on five reels, four rows, and 40 active paylines. Wins are formed when you land at least three matching symbols on a payline, starting from the first (leftmost) reel.

Spinning the reels of the Thunder Shields slot will be available once you press your preferred bet per spin. This game accepts a great range of bets starting from £0.40 and going up to £40 per spin. Click on the coin located on the right side of the reels to adjust the bet. Next, press the bigger ‘Spin’ button above the coin to start your Viking adventure. In addition, this game allows you to play hands-free by activating the Autoplay feature. The autoplay button is placed above the spin button. It allows you to play between five and 1,000 auto spins and adjust your win and loss limits.

The Thunder Shields slot has high-end graphics and lots of bonus features. It comes with exciting gameplay that will keep players entertained. Speaking of bonus features, this game will allow you to trigger the Colossal Respins feature, the Mystery Spin feature, the Hold & Win Respins feature, as well as to win one of the three fixed jackpots. When the game’s features are triggered and if multipliers apply as well, you can win up to 4,035x the stake on a single spin. Instead, the maximum amount you can win in the base game is 250x the stake, which is still great.

Since this is an iSoftBet release, there’s no doubt that you’ll find a top-notch design and gaming experience when playing the Thunder Shields slot. As we’ve mentioned above in our Thunder Shields Slot Review, this game features a Viking theme so you’ll find Viking warriors and ships. Moreover, the reels are placed on a Viking ship, floating through waters at sunset. When you open the game, you’ll also notice that there are round wooden shields placed on both sides of the reels. All in all, the game’s design and graphics are high-quality and orchestral music plays in the background, giving the final touch to the whole gameplay.

The reels are fulfilled with both low- and high-paying symbols. The first are the Royals 10, J, Q, K, and A which have a standard design but are placed on Viking shields. On the other hand, the high-paying symbols are represented by the Viking warriors and are designed to perfectly fit the whole theme. There are four men and one woman among the members of the crew, worth 1.875x to 6.25x the stake for five of a kind.

When it comes to the specifications, the Thunder Shields slot seems to be a pretty decent game, so you should land some reasonable winnings. This game has a medium to high variance so you can expect to get substantial value wins and relatively high win frequency. Moreover, the game’s RTP is 96%, which is the industry average. RTP means Return to Player and it’s displayed as a percentage, showing the theoretical payout of a slot game. The Thunder Shields slot is capable of delivering payouts of up to 4,035x per bet on a single spin, so players can win thousands of pounds when they play with the maximum betting option available.

We’ve already mentioned the bonus features included in the Thunder Shields slot, so let’s explain them in detail. As we head over to the features, you’ll notice that the main focus in the Thunder Shields slot is the Hold & Wil Respins Feature through which you can lay your hands on one of the three fixed jackpots. While this game doesn’t feature a free spins bonus, you can benefit from three other bonuses that will give you the biggest payouts.

The hammer symbol is the wild symbol, used as a substitute for all regular symbols, helping you to form a winning line. Also, this symbol is used for triggering the Colossal Respins feature. This feature is triggered whenever the wild symbol lands on the reels. Then, a Colossal Respin will unite the first two columns and will give you a respin. The first and second reels are filled with colossal 2x2 symbols during that respin.

If there’s another wild landing on the reels during the respin, the feature continues and adds an extra reel to the giant area. So, you could end up with giant symbols in a 4x4 area. Once you get to four respins, you’ll get a 2x multiplier which will go up as you get additional respins.

In the Thunder Shields slot, the shield is the Mystery Symbol. It lands in full or partial stacks and reveals the same matching symbol when the reels stop spinning. At any time during the gameplay, the Mystery Spins feature may trigger. When it’s triggered, at least three reels land as full Mystery Stacks, which will transform into a single type of symbol.

The Hold & Win Respins feature is a new bonus feature included in some of the newest online slots. It is triggered by landing six or more Cash Shield symbols on the same spin. These symbols come with a cash value. Then, you’ll receive three respins, while the cash values will remain in place. During the Hold & Win Respins feature, Cash Shields and special symbols are in play, and every time a new such symbol lands, the respins counter will reset to three. The respins continue until you’ve used all of them. The prize awarded is collected by the Cash Shields. Besides the Cash Shields, there are other Special Shield symbols that can give you different rewards:

Just like the other new online slots, so does the Thunder Shields slot is optimised to work on all mobile devices. iSoftBet has built this game with HTML5 which allows it to adjust on any smaller screen and any operating system. When playing the Thunder Shields slot on mobile, you’ll receive the same top-notch gaming experience and high-quality graphics.

Is there a Jackpot on Thunder Shields slot?

As we’ve mentioned above, the Thunder Shields slot features three fixed jackpots that you can win as part of the Hold & Win Respins feature. During this feature, if you land three Storm Shield symbols, you’ll trigger the Thunderstorm Prizes feature. This feature will randomly give you one of the following jackpots:

iSoftBet is a well-known developer for high-quality online slots with beautiful designs and exciting gameplay. If you’re a fan of Ancient Egyptian slots, you can check the Kings of Gold slot by iSoftBet, which is also a Hold and Win game that comes with a free spins bonus and stacked wilds. On the other hand, you can try playing the Greta Goes Wild slot that will take you on a journey to Oktoberfest, the most popular beer festival in the world. Or, if you want to try some slots that feature the popular Megaways mechanic, you can play the Aztec Gold Megaways slot by iSoftBet, where you’ll walk to the jungle and win up to 19,000x your bet.

The Thunder Shields slot comes with a long list of features, giving you many reasons why you should try this game. The Hold & Win Respins feature is a true sensation which can give you one of the three fixed jackpots. All in all, iSoftBet did a great job with this game, providing us with a well-designed Viking slot that has high-class graphics, immersive soundtrack, and great payout potential.

Explore Thunder Shields slot today and claim your bonus offer at one of our featured casinos.

Vikings of Fortune: Hold and Win