The world's most famous progressive jackpot slot gets a makeover with the help of the Mad Hatter. With a seed pot starting at 1,000,000.00 and three other jackpot tiers, this is a new progressive slot to call your favorite. It has 243 ways to win on five reels and maximum base-game payout of 2400x on the winning bet. 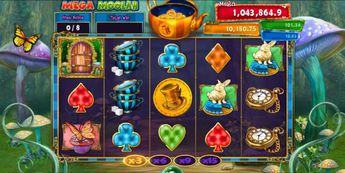 Mega Moolah is an immortal online slot. This progressive jackpot game is one of the most frequently played in the world, which explains the huge amounts which have reached more than 10 million pounds and have been claimed by a number of people.

The company behind this game is Microgaming, who have decided to give their timeless classic a makeover, in the shape of the Atlantean Treasures: Mega Moolah slot. We can’t vouch for the success of this that game, but it seems like its originator is holding fast to its throne.

Enter Absolootly Mad: Mega Moolah slot, again, by Microgaming, who are giving all of the Alice in Wonderland themed slots a run for their money. It is clear that Lewis Carrol’s book enjoys a reputation among the slots player, on account of so many games featuring elements of it.

Off we go down the rabbit hole and straight in to Alice's Wonderland, which is abundant in mushroom rings and imagery from any given film or cartoon rendition of the book.

The symbols on Absolootly Mad: Mega Moolah slots are the Rabbit's pocket watch, the cops of tea, the mad hatter's top hat, the door, the bunny cake and so on.

Unlike Mega Moolah one, this game has much improved graphics design that makes for an engaging reel experience.

Win outcomes are marked by fanfare and big wins are treated to a lot more light and gold coins than you can count.

Throughout your adventure with the game, you will be treated to a musical theme that hails from Alice's universe yet it is one that fits the gameplay perfectly.

If you have prepared yourself with some breathing exercises and are ready to hit the spin button, the game's 243 ways to win are expecting you on five reels and three rows.

Before you make the first move, make sure that the casino's default bet amount isn't one that is too high to wager from the get-go. Perhaps a bit later? Either way you please, the bets can be selected from the bottom left area of the screen.

Utilize the minus and plus buttons to scroll through the range, which starts at amounts that are frankly modest for an online progressive slot, at only 20p per spin. The maximum is a high-ish £50.00 per pop, which is a tolerable amount of money to be placed on the stake, for the high rollers out there.

Absolootly Mad: Mega Moolah slot comes with the standard equipment. There is a turbo button in the shape of a thunder, found in the bottom right and next to the speaker button. The autoplay option is also there to let you choose from the automatic spins presets that send the reels spinning on their own for the number of times you choose.

The game at hand has Microgaming's original 243 ways to win, which turn up wins on consecutive reels, starting from the left. These can include three, four or five matching symbols and multiple such outcomes can result from a single spin.

However it isn't only that. The game has the rolling reels payout mechanism in addition to the 243 win ways. This means winning symbols are subtracted from the reel-set and replaced by a new set. Multiple consecutive wins can result from the same spin.

In terms of value, the most valuable symbol on the reels of Absolootly Mad: Mega Moolah slot is that of the Mad Hatter. This symbol pays 10x for five of the same, but it doesn't top five golden hats in a row, which stand for the wild symbol.

Let’s say that the rolling wins are one of the game’s extra features. Not only does this feature take place in the base game, but it is also available in the free spins bonus, where it causes a rise in multipliers.

When a win is triggered in the free spins, the subsequent win gets a 3x, the one after it gets 6x, the third win gets 9x and the fourth and all following onwards get a multiplier of 15x.

As for the free spins bonus, it is triggered by the wooden door, which is the game's scatter. You start with eight spins but the bonus can retrigger with additional three or more doors on stopping on the reels.

And the best part of the game: its progressive jackpot.

The excitement begins with the wheel of fortune gig. Land five jackpot symbols to trigger the bonus. There are four jackpot tiers and the plates on the wheel refer to their respective tier.

To win the Mega, you need to land on the mad hatter's hat, which only takes up one plate. Great news is that the jackpot prize seeds at 1,000,000.00 so whenever someone wins the progressive, the pot restarts to that sum.

It is highly questionable that Microgaming will release this game as a free play demo, but we can only wait and see. Mega Moolah already enjoys huge popularity, so those players who have heard about the game don’t need the demo to get on the new release.

A progressive jackpot with four prize tiers that has otherwise a maximum payout of more than 2000x on the winning bet, is certainly one to consider playing. There are enough extra feature in it for a top level gaming experience.

Discover the Absolootly Mad: Mega Moolah slots by claiming a welcome offer right from this page and play at top rated online casinos.