Triple Edge Studios have put out some neat slots releases. This time around they have the Zeus Ancient Fortunes slot that has a top payout prize of 70,000 coins multiplied by the line bet on a set arrangement of five reels and three rows. The symbols spin over the ten paylines and the reel action involves multiplied given on the rolling reels feature, that can reach up to x7. The big wins and mega wins are pompously announced, with Zeus descending from the clouds and causing thunders on your device. Triple Edge Studios slot has a return to player theoretical outcome of 96.02%. 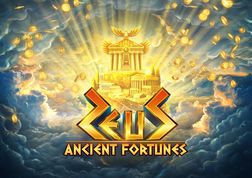 Play the Ancient Fortunes: Zeus slot for a chance to win as many as 70 free spins rounds and add a multiplier that can go as high as 21x.

If you want to embark on a slots pilgrimage to the holiest mountain of the ancient world, then get on the Ancient Fortunes: Zeus slot. You would be playing for a chance to land more than one winning in a row, which triggers the accruing of multipliers with each consecutive win. That way, the game can deliver a multiplier of a high as 7x with just several spins. Besides the entertaining gameplay and the magical theme, Ancient Fortunes: Zeus has a bonus feature that allows for the free spins bonus round to become retriggered more times than you would bother to count - precisely, as many as 70 times a retrigger.

But to take things from the top. This game was developed by the slots experts at Microgaming. Set in the ancient Hellenic city state, on the holy mount of Olympus, we have here a beautiful slot game with excellent graphics and a gameplay that spins across 10 paylines with five reels. The objective of the game is let your lucky wings unfurl so that you may inspire the game to deliver the potentially magical multiplier numbers which can see the winnings factored in by 7x.

So if you are eager to rub shoulders with the ancient Hellenic gods, start your adventure today and be in the company of Poseidon, Ares, Hermes, Dionysus and Zeus.

How To Play Ancient Fortunes Slot

To start spinning the reels you need to set up for the gameplay. That is done from the controls that are located on the bottom of the reels. This is where you can play with a smallest coin size of just ten pennies, or you can go for some high stakes reels action of £70.00. Whatever amount you select from these margins or the numbers that are in-between, you will be in for some smooth reel action on all ten paylines. If you want to set the game in Autoplay mode, you are welcome to do so and instruct the reels to spin on their own. The paytable button is located in the bottom left corner. This lets you access all of the information that is relevant to the game, such as the symbol pays and details about the Ancient Fortunes: Zeus slot free spins.

Everything about this game has the markings of the ancient world. You will witness the royal columns, the tall temples made of spectacular marble, the busts of deities and some of the high cards cast in precious limestone. This reflects the grandiose world in which the gods use to live, or at least how the mortals thought that they lived up on Mount Olympus. At any rate, the design is very true to the theme, as the developers at Microgaming have dedicated attention to detail in creating every single element of the game.

In some respects the design may remind of Divine Fortune, which is a progressive jackpot slot made by Net Entertainment, which plays around a similar theme that offers a serious potential for triggering the string of events that may take you close to the jackpot. Still Ancient Fortunes: Zeus slots is a different slot game, and one that is a lot more fresh compared to Divine Fortune slot.

As for the symbols, you will encounter the creatures that make the myths and the legends: snakes, vultures, krakens, panthers and so on, but also gods and deities such as Dionysus, Hermes, Ares, Poseidon and Zeus.

Zeus is the game's Wild symbol and substitutes for all except the scatter. Zeus is also the Rolling Reels trigger, which lets the players win both left to right and right to left. So if you are ready to take on these creatures in the name of the gods, this is a chance to do it.

The title is true to this slot's essence: there is a fortune of multipliers and free spins for the luckiest players out there. The Free Spins bonus feature is initiated when you land three or more of the scatter symbol, which is Zeus' lightning bolt. This starts you off with ten spins. Landing four scatters brings 15 free spins and five scatters will result in 20 free spins.

The bonus feature can be retriggered when you land additional scatter symbols (three or nothing) which could lead to as many as 70 free spins that you can take during one setting in total. This is not where the bang stops. During the Ancient Fortunes: Zeus slot free spins bonus, you can also see the multiplier amount grow higher. With each elevating of the level of the free spins bonus, your multiplier amount becomes jacked up higher. What starts at x3 goes to x11 and potentially all the way up to 21x.

If you are ready to climb the holy mountain and chill out with the gods, you can start right here by claiming a welcome bonus at one of the casinos on this page.