Lucky Lady’s Charm Deluxe is a sequel to the original Lucky Lady’s Charm and the two versions aren’t too different from one another. This variant features five reels and ten paylines and is one of Novomatic’s most successful titles. The minimum stake is a single penny per payline, whereas the maximum amount that can be wagered per spin is £100. 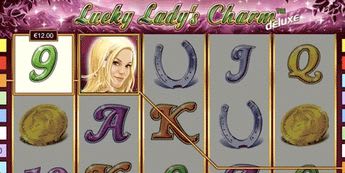 Lucky Lady’s Charm Deluxe was released back in 2010 and it’s still pretty popular, but what’s even more interesting is that its prequel was released long before that – in 2003. The deluxe version is based on the original released, but it features few changes, including improved graphics. Even though it’s been a while since its release, the game doesn’t look half bad.

Novomatic have developed quite a few online slots over the years, as well as many land-bases slot machines. In fact, they initially began developing land-based online machines and then when the first online slots appeared, they were well prepared and entered this market. You can play Lucky Lady’s Charm Deluxe slot with as little as 10p and it is available at many online casinos, including those featured on this page.

The symbols are rather similar to the symbols of the original Lucky Lady’s Charm slot, but we have to admit that this variant is a bit more colourful and more vibrant, both in terms of symbols, but also when it comes to the general atmosphere.

Lucky Lady’s Charm is obviously a sequel, the word ‘deluxe’ tells us that and we’ll speak in detail about Lucky Lady’s Charm. Now we’re going to have a look at some of the other most popular slots by Novomatic. Bear in mind that many online slots by Novomatic have been initially developed as land-based slot machines. The online versions of these games have been released later, usually after it was proven that the land-based versions are popular and liked by players.

Book Of Ra slot is one of Novomatic’s finest. It features an Egyptian theme which makes its success even more remarkable, as this is one of the most common slot themes and there is fierce competition. Book of Ra features an RTP of 96%, there are ten paylines across five reels.

Lucky Lady’s Charm was a land-based game and it was one of Novomatic’s most popular releases. It came with nine paylines, which is one less than the Deluxe version, but the RTP of the original version was significantly higher, the return to player rate of the first Lucky Lady’s Charm release is 97.10%. That is a pretty good figure, both in general and also when compared with the Deluxe version.

The control panel is pretty straightforward, and we could say rather retro. The buttons are displayed below the reels and each button has its function written across the field. This ensures that there’ll be no misunderstandings, clicking a button that says ‘Start’ can only mean one thing – the reels will start spinning and the game will start.

Speaking of buttons, there are four large buttons that have different functions, as well as four smaller ones that enable you to increase/decrease the number of active paylines and the amount that you want to wager per line.

First, we have the abovementioned start button, placed towards the bottom right corner below the rightmost reel. Before pressing this button make sure that you are alright with the set stake amount, you don’t want to wager more than what you can afford to lose. To its left is the ‘Gamble’ button and it only becomes available when the gamble feature becomes an option. We’ll speak more about this feature below and that’ll help you understand the purpose of this button better.

On the left side of the screen you will see the ‘Autoplay’ and the ‘Paytable’ buttons. With the autoplay feature, you can set the reels to spin automatically, for a number of times. You can choose how many times you’d like the reels to spin, but you also have the option to stop the autospin whenever you want. We’d advise caution with the autoplay button as the amounts quickly add up when the reels are spinning non-stop.

Next to the ‘Autoplay’ button you’ll notice the ‘Paytable’ button, click on it if you’d like to see the possible winning combinations and their respective payouts. The ‘Lines’ and ‘Bet/Line’ fields are placed right of the ‘Paytable’ button and you can use them to adjust your wager. For instance, if you decrease the amount of paylines, the amount that you wager per spin is automatically decreased.

You can select as little as one active payline but bear in mind that if a combination is formed across a payline that’s no longer active, no payout will be activated.

The minimum wager is 4p per payline, which means that if you’re playing with all active paylines, you’ll need to wager a minimum of 40p. If you like to increase your wager and try your luck with a significantly higher stake, that’s possible too – the maximum bet is £100. This might not be the highest amount that you can wager on an online slot game, but it’s sufficiently high for players who are looking to up their wager.

The maximum payout in Lucky Lady’s Charm Deluxe slot is 9,000 times the wager per line. In the case when you’re playing with £100 in total, or £10 per line that would amount to £90,000. That’s a pretty impressive amount for a non-progressive jackpot.

We said a few words on the possible prizes and the highest amounts that could be won in this game, and we mentioned some of the symbols. You’ll see a gold coin, a horseshoe, a four-leaf clover, a Ladybird and a rabbit’s foot in addition to the Lady itself who is the wild symbol and also generates the highest payout in the main game of 9,000 times the wager per line. The scatter is represented by two hands holding a magic ball, but it also generates a payout – up to 500 your total wager for a combination of five symbols.

In addition to being a substitute that can generate, i.e. complete a winning combination, the Lucky Lady’s Charm Deluxe increases the amount that you get from a winning combination. To be more precise, the prize is doubled whenever the combination is completed by a wild. So, if you are to win £100 for a particular combination, if one of the symbols is a wild instead of the standard game symbol, the actual payout would be £200.

The Lucky Lady’s Charm slot game’s scatter symbol is a floating crystal ball and it is the one that triggers the bonus feature – the Lucky Lady’s Charm Deluxe free spins. The number of free spins that are awarded when at least three scatter symbols appear. A multiplier is also activated, so all your winnings during the free spins round will be tripled. The feature can be retriggered if scatters appear on the reels during the free spins.

This is a time when many players prefer playing slots on their mobile device, either a smartphone or a tablet and most online slots, if not all of them, are optimised and can be played on mobile devices. You won’t need to download an app or anything like that. Just register with one of the partners featured on this page, if you aren’t already, and log in to your account on your mobile browser. And that’s it, you will be able to play Lucky Lady’s Charm, as well as a number of other games. The game will be completely adjusted and optimised and it will fit your screen and its size.

Lucky Lady’s Charm Deluxe is one of the most exciting Novomatic releases, but also one of the most popular slots in general. The free spins round comes with a multiplier which is quite handy.

The RTP might not be of the highest percentage, but it is pretty decent, and even though it is an older game, you can still play it on your mobile device, be that a smartphone or a tablet.

The game looks quite modern, even though it was released almost a decade ago. Like all other slot games it is a game of chance and nobody can really predict whether it’ll be your lucky game or not. If you like the look of it and the game theme, you could give it a go, it is available at many online casinos.

In fact, our partner sites offer Lucky Lady’s Charm Deluxe, as well as a range of other games with a similar theme. It is difficult to define the theme exactly, but you will see several symbols that are generally considered to be associated with luck somehow.

If you’re looking to try your luck on Lucky Lady’s Charm Deluxe, register with one of partners, if you haven’t already, claim your bonus and have fun! Hopefully, Lady Luck will bring you a bit of luck!