Take a journey to the African Savanna with WMS Gaming’s six-reel, 4,096 payline Raging Rhino slot! Spin the six reels of Raging Rhino with a total bet range between 40p and £60 for the chance to win a massive payout! With a free spins feature that could get you up to 50 free spins and a wild symbol, you have plenty of chances to land a win! 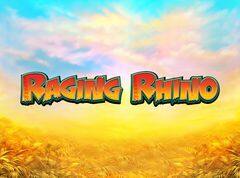 We would say experience the African Savanna, but in truth, WMS Gaming’s six-reel, 4,096 (yes, really) ways to win Raging Rhino slot features animals from all over the globe! Raging Rhino really is an animal experience, letting you enjoy some excellent gameplay at sunset, in view of various well-drawn animals and other symbols! With a bet range between 40p and £60, this slot caters to both low and high rollers. But that’s not all because Raging Rhino also has a rewarding Free Spins bonus feature during which you could win up to 50 free spins!

When you first launch Raging Rhino slot, you'll instantly notice the piercing and eye-catching design and wildlife theme! Not only is the background and area surrounding the reels incredibly designed, but the symbols too are of high quality.

The six reels are placed in four rows within a simple blue frame. The Raging Rhino game logo is perched atop the reels while the game buttons are placed below them. The entire reel set is placed against a background featuring the African savannah at sunset. For a more realistic experience, sounds of different animals and insects buzzing keep you company while you spin the reels. 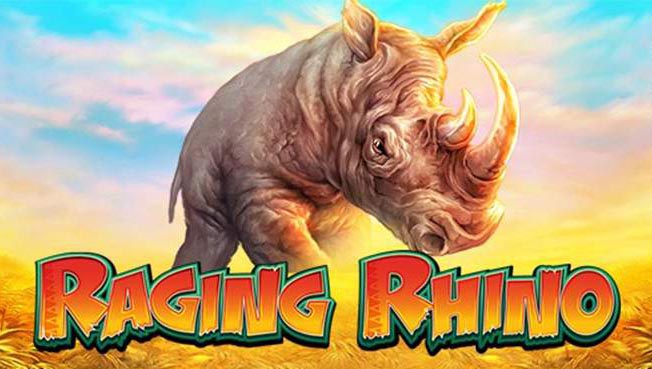 As with most online slots, Raging Rhino has two sets of symbols on its reels.

The special symbols in Raging Rhino slot include a sunlit tree as the wild symbol and a huge shining diamond for the Feature. The WILD appears on reels two, three, four and five only and substitutes all symbols except Feature. The Feature symbol is also the highest-paying symbol in Raging Rhino for a six-of-a-kind combination.

How To Play Raging Rhino

Before you start spinning and begin the influx of animals onto the reels, you must select the stake that you’d like to play. When playing Raging Rhino slot, there are a couple of things to take into account before spinning the reel set.

Coin sizes or ‘Total Bet’ amounts for Raging Rhino start at 40p, going all the way up to £60! Plus, because all of the 4,096 paylines are fixed, you won’t have to multiply your stake in order to activate them all. To select your Total Bet for the spin, you need to click the TOTAL BET button and select one of the 23 available options. As simple as that!

Once you’ve chosen your stake to play with, you can then start spinning by clicking the circular arrow spin button in the bottom right of the screen. Unfortunately, Raging Rhino doesn’t have an auto spin feature, so you’ll need to do all the clicking manually after each round!

If you want to try Raging Rhino before making any deposits, go for the Raging Rhino free slot play. Although you can’t bank any eventual win, the free play of Ragin Rhino has a lot to offer. For starters, it gives you the possibility to see how the game plays with different total bets. Start spinning the reels with the lowest total bet possible. Play at least 50 or 100 rounds so you can see how much the game pays out. Then, start increasing your total bet until you reach the highest possible bet.

By spinning on the free play of Raging Rhino, you can also see the bonus feature in action. You can see how many spins are awarded for a different number of triggering symbols and what happens during the feature. If you want to find out the payouts of each of the symbols, you can open the game’s paytable. Everything in the free play of Raging Rhino looks and plays just like the real version! 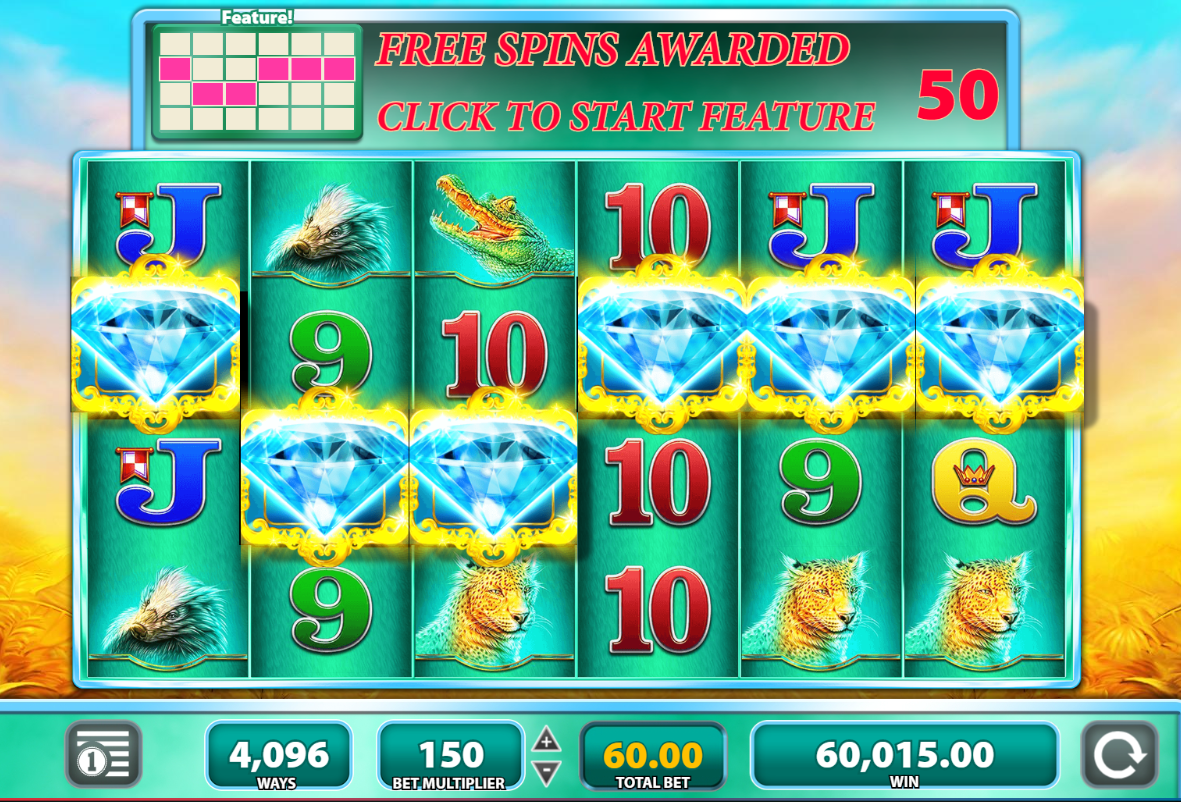 How To Win Raging Rhino

As with most online slots, payouts in Raging Rhino slot are awarded for landing matching symbol combinations on the paylines. Matching symbols must land from left to right on an active payline except for the FEATURE symbol which pays in any position.

In order to create a winning combination with the playing card symbols, three or more must land, however with this slot game’s higher value symbols, just two are required and will result in a payout, albeit a fairly modest one.

This slot’s most lucrative standard symbol is the Rhino, as you might expect with the game’s name. Landing six of these will reward you with a payout of 450x your stake.

Plus, the game’s wild symbol will replace all others except the diamond, helping to create winning combinations too.

Besides the base game wins, you could also get your hands on some serious cash during the Raging Rhino bonus feature. Better yet, you can even get up to 50 free spins!

As you may or may not know, we really enjoy a free spins round in any slot game, and we must say that Raging Rhino could be up there with the best! Who doesn’t love a freebie?

The Raging Rhino really does have an abundance of free spins up for grabs, with a maximum of an incredible 50! Plus, we noticed that big wins seem to come more frequently during the free spins round! So, if you’re lucky, you could be winning more for less, and by less we mean nothing!

Return to Player or RTP is a term used by online casinos to describe the amount of money that an online slot will pay back to players over time. It is a theoretical calculation that takes into consideration all the bets played over time. The RTP is expressed in percentages and is always below 100%. An RTP of 96% is considered an average rate, everything below it will be a below-average RTP.

The RTP of Raging Rhino slot is 95.91% which is slightly below the RTP average. However, this shouldn’t concern you that much because the game has a lot to offer. It has a generous Free Spins round and payouts that could easily match those of a progressive slot.

Besides RTP, the variance is probably the next most important thing you should be looking at when playing slots. Simply put, variance tells you how a slot pays. There are three types of variance – low, high and medium – and each differs from the other.

Low variance online slots tend to hit more frequently, but the wins are usually small. Occasionally, there is some decent win, but not that often. High variance online slots, on the other hand, award mainly small to somewhat decent payouts, but not that frequently. What makes high variance slots attractive to players is the fact that when they do land a big win, it is usually a huge payout. Most online slots are medium variance slots, with a moderate frequency of wins and moderate amounts.

The variance of Ranging Rhino is medium to high, depending on what total bet you decide to play. So, you could expect anywhere from moderate win frequency and moderate wins, to not that frequent wins of bigger amounts.

WMS Gaming has optimized Raging Rhino slot for any mobile device. They’ve optimized it for both iOS and Android devices, so you can spin its reels wherever you are. You don’t need to download any software to play Raging Rhino on your mobile or tablet device. Go to your favourite online casino click on the slot and it will load in your browser. If you don’t know which online casino offers Raging Rhino, check our recommended online casinos. You can claim your welcome offer from Slotswise and you’ll be spinning on Raging Rhino in no time!

We think that the Raging Rhino is an online slot that caters to all kinds of players, although the budget itself perhaps targets those in the middle of the field. The minimum bet of 40p isn’t necessarily the lowest we’ve ever seen, nor is £60 the highest!

Despite this, there are plenty of ways to land winning combinations, which is no surprise when considering that this slot has more than 4000 ways to win, or paylines as they’re often otherwise known!

Whatever your budget though, we’d say that Raging Rhino slot can attract most players with its incredible graphics, enjoyable gameplay and animal sound effects. Plus, with a jackpot of 400x your stake, there’s a chance of getting your hands on a nice cash sum! Although it may initially look different featuring six reels as opposed to the usual five on most online video slots, you’ll soon get used to it.

Raging Rhino slots also has a few minor features that make for an enjoyable slots experience, including the reels that cover the background when they start spinning, giving the game a slight interactive and 3D feel.

So, claim your welcome offer from our recommended online casinos today and spin on Raging Rhino for the chance to win big!

What are the top Raging Rhino slot wins and payouts?

Is Raging Rhino Megaways different from the original game?

Both Raging Rhino slots are popular among the players, however, the original game has 4096 ways to win and the Megaways version has 117,649, which are two different payout systems.

Does Raging Rhino come with a bonus feature?

Yes, the game has a free spins bonus feature. Players can win 8, 15, 20 or 50 free spins for three, four, five or six scatter symbols.