Get back to basics with another classic-looking slot from Novomatic. Introducing Reel King, the five reel and 20 paylines online slot with colourful symbols and some exciting gameplay. Playable from £0.01 up to £100, the innovative Reel King bonus feature could get you the maximum payout of 500x your stake. Spin today and play for the chance to win big! 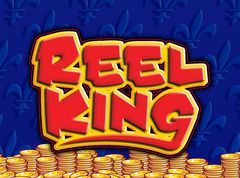 Introducing Reel King slots, Novomatic’s five-reel, 20 payline online slot game. Spin on this classic-looking slot and try to land symbols that wouldn’t look at all out of place on an old-school slot machine! Enjoy the game’s colourful design as the reels of Reel King spin and hopefully land you some winning combinations for big sums of money when you play this popular slot!

You won't be blamed for thinking you're playing on a fruit machine with the symbols you'll find on Reel King. Once you start spinning, you’ll notice that the symbols comprise of a 10, J, Q and K. This slot game’s other symbols also include a plum, cherries and a bag of gold jackpot. Reel King also features a wild symbol with a jester hat.

As mentioned, Reel King slots offers players plenty of chances to land winning combinations across 20 paylines. Better yet, players can wager between 1p and £100 on any spin, so no matter what your budget is, Reel King is definitely worth considering.

Aside from this slot’s specifics, the design is eye-catching, to say the least. The graphics are bold and colourful, if not a little cartoonish, and the background is clad in royal blue.

How To Play Reel King Slots

Before you spin the bright Reel King reels, you must select your stake which, as we’ve said, can be anywhere between 1p and £100.

Choosing your coin size can be done by clicking the ‘Bet/Line’ button at the bottom of the screen. Once you’ve done this, you can also decide how many active paylines you’d like to play across, choosing between one and 20.

This isn’t a bad thing though, because the more paylines that are active, the more chance you will have of landing winning combinations in a variety of ways. 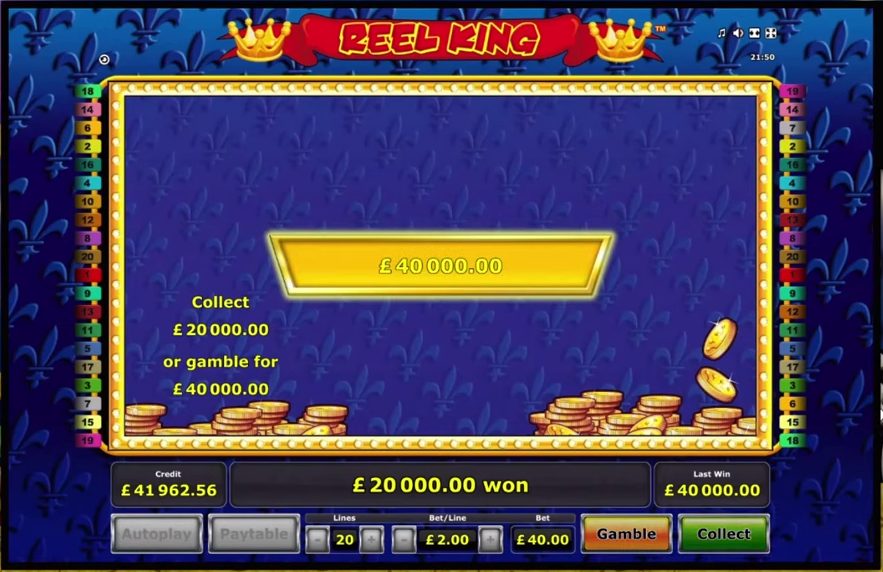 How To Win Reel King Slots

Landing symbol combinations of three or more on Reel King will reward you with a win, with the most lucrative being the jackpot symbol, as you may have guessed.

The typical fruit machine symbols, the plum and cherries, pay out smaller amounts for combinations than the playing card symbols do, unlike many other slots.

The jester wild symbol can appear on reels three to five and can substitute for all other symbols in order to make winning combinations.

The Reel King slots has a lot more to offer than first appearances might make you think. Although this slot game looks basic, it does have a few additional extras that’ll keep you entertained throughout your time spinning on Reel King.

This feature will occur randomly after any spin, whether you have won or not. At least one of the reels will then turn into a small ring-shaped slot machine, featuring only ‘7’ symbols on the reels. Pressing start will get the reels spinning, each of which resulting in a win until you land one black diamond. Once you see this, the bonus round is over, and you’ll return to the base game.

During the Reel King Feature, payouts can be between 5x and 500x the initial stake amount, and we think that makes this bonus addition potentially a rather lucrative one. 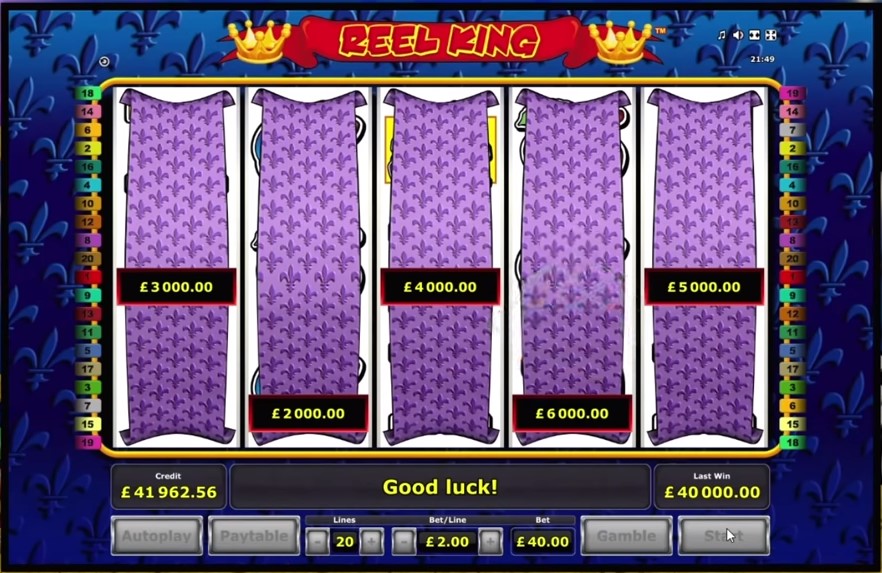 If we’re honest, Reel King slots is quite a simple video game, offering some basic animations and gameplay. Reel King has an RTP of 94.00% which isn’t the highest RTP out there, but it is not necessarily a bad thing within the slot scene. Some of the most popular slots that aren’t exactly ground-breaking can build up a loyal following and Reel King is one of them!

If this is your first encounter with Reel King, then you probably haven’t heard about the Bandit and Backinamo. He is a popular youtuber who posts videos of him playing online slots. You can find him on YouTube as The Bandit’s Slot Video Channel as well as on his webpage at www.backinamo.com.

In one of his videos where he’s playing Reel King, he manages to make over £70K in one session on Reel King. You can watch the video on https://youtu.be/8MIGItdvxKo?t=25.

Reel King has been one of his favourite slots for quite some time and that’s why he goes back to its reels again and again. If you check the forum section on Backinamo, you can read all about his win, and losses, on this excellent Novomatic online slot.

One of our best tips for playing the Reel King slots from Novomatic, and indeed all multiline slot games, is to try and wager across as many paylines as possible.

By activating all 20 paylines, or at least as many of them as you can within your budget constraints, you’ll have a better chance of landing winning combinations and ultimately claiming more cash!

Plus, with the wild symbol only having the ability to appear on reels three, four and five, having more active paylines means that there is a better chance of them appearing and helping you land even more winning combinations.

Also, Reel King slots doesn’t seem to pay out large sums of money, very often. If we had to choose, we’d probably say that this is a low volatility slot, likely to pay out little and often.

With this in mind, we’d doubly recommend playing with a smaller coin size but across plenty of paylines. This way you’re less likely to deplete your slots funds very quickly.

The Reel King game is a classic slot in nearly every sense of the word. From the old-school symbols often found on fruit machines to the bold colours and design, Reel King definitely appeals to those of us used to playing on physical slot machines.

Despite its simplicity, Reel King does stop itself being too classic, in the sense that it has a cool Reel King bonus feature, offering players a chance to win up to a 500x multiplier!

Overall, we’d say that Reel King slots is a good game for a hit of slots nostalgia, taking inspiration from classic fruit machines. The graphics and gameplay might not blow you away, but we think it’s a good slot game for starters, and with a nice additional bonus feature to boot!

And if we sparked up your interest and want to give Reel King slots a spin, make sure that you choose one of the casinos on this page and try it out. Sign up for an account, make a deposit and claim your welcome bonus offer!