Reel King Mega slot is the third installment of a game that became an instant classic, even though it offers nothing special in terms of graphics and visual candy. Why is that the case? Let's see - low variance, balanced by a return to player outcome of 94% and a bonus feature, resulted in recognition. This time around, we have an RTP of 96% and bets that start at 0.20 per spin, plus two bonus features, but no free spins, which is completely fine. Claim a welcome offer to one of the casinos on this page to play. 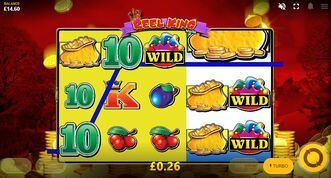 Play Reel King Mega slot for a chance to win part or all of the maximum possible payout of 100,000x on the line bet. Enjoy with two bonus features and multipliers.

Reel King slot was one of the favorite slots machines that wasn't quite a classic but had all of the elements of one. The game enjoyed such wide distribution that it was one of the few such games that could be found on the rosters of so many online casinos. The game appeared a bit dated, yet it offered excellent winning potentials. Well, now we have a remake in the Reel King Mega slot. We have the same old symbols, again, three rows and five reels, but a better gaming experience overall.

Reel King Mega comes with 20 always active paylines and a set of bonus features, such as the Reel King feature, the bouncing king's crown and a wild symbol that substitutes for any, even the most lucrative symbol on the paytable. As these and the standard pay symbols spin on the reels, there may be a colossal one that pops up every once in a while, at random. This feature is yet another opportunity that increases the chances for a bigger and better win.

Those who have played Reel King will be pleasantly surprised at how well the sequel has been made to play. So let's check out some

Setting up for the gameplay is a piece of cake. There is no need to configure any paylines. Choosing the bet will simply involve selecting one of the available amounts from the column under the Stake button. This is where the players can start with bets per spin that are as low as £0.20 and end up as high as £200.00, with many other amounts in-between. Any bet that is selected will play across all 20 lines, so when playing with 20p, the prizes are multiplied by one penny on a payline, and by the same logic, a £20 bet is £1 on the line.

There are few other buttons on the screen. The spin is the renowned circular button and here it is tucked in the bottom right corner of the screen. To the left of it are two buttons that can be used in the gameplay. Turbo causes the reels to spin and stop much faster than the usual, and the Gamble button lets the players take their base game winnings to the gambling table and play game of chance that causes the arrow to stop at a portion of the circle, for a chance at one of the prizes.

The game has enough symbols and paylines to arrange winning combinations. All that is needed is the player's input with the spin button, and a wish to play. The game's most valuable symbol pays 500x multiplied by the line bet. This is the bag full of gold symbol, which is followed by the King, which pays 200x for five matching on a payline. Both of these, and all of the other symbols can be substituted by the Wild.

One thing that should be made immediately clear is that Reel King Mega slot does not have a free spins bonus feature. This is not a deficiency. Instead of the free spins there are three features that make the game more exciting than what is usual.

The Reel King feature occurs at random. Whenever the background to the reel-set turns golden yellow, there will be an expanding king symbol who constitutes a reel of its own that spins various combinations of the Lucky Sevens symbols. Each combination comes with a pay of its own, with the most being 25x. This feature comes with a guaranteed win with any mix of the seven symbols.

The game comes with a sizeable jackpot prize of 100,000x and with this comes a return to player theoretical outcome of 96.00%, which is dead-set on the edge of average. This is so much more favorable compared to the original Reel King slot, because that game has an RTP of 94.00%.

This edition of Reel King has been optimized for mobile. The slots experts at Red Tiger Gaming are the developing studio and we’ve seen some excellent releases from their side. Rest assured that mobile devices running Android or iPhone will be able to launch this game if the preferred online casino supports mobile.

This is a game anyone would enjoy, especially those who have a thing for retro and classic Las Vegas slots. Reel King is a lovely slot game. Even though the symbols seem kind of bland and there are few of these, and no free spins, the overall gaming experience is great.

Play Reel King Mega slot when you claim a welcome bonus to one of the casinos on this page.