Legacy of Dead takes the player on a journey to Ancient Egypt, precisely, inside the pyramid where everything is golden and luxurious. The players can take their chances on a game with 10 selectable paylines and five reels that has a maximum exposure of 250,000x on the payline bet, or 5000x on the winning bet. 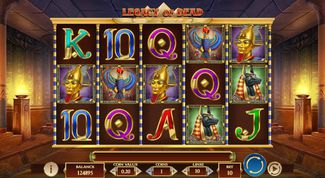 Does the Legacy of Dead slot want to spar against the Eye of Horus which has ten paylines that aren't fixed, we can't tell. Nevertheless, the game at hand has a maximum exposure of 250,000x coins on the winning bet and a number of extra features that can help towards big win outcomes.

The slots professionals at Play'n GO have another Ancient Egypt-themed online slot on the platter. This time around, the alternative world is not futuristic, such as in the Ankh of Anubis slot, but fierce-looking nevertheless with the golden pharaoh and anubis symbols.

The players are looking at a reel-adventure that has ten selectable paylines, which is a rarity in the world of online slots nowadays.

What is more, Legacy of Dead comes with a free spins bonus feature, a special expanding symbol thereof, and with the possibility to canvas an entire reel-set in the same, matching symbol, which inadvertently leads to a big win.

In terms of the design the game looks no different compared to many other slots of the same theme by Play'n GO. That's not a bad thing though, because these slots experts create marvellous games that are always fun to play and engaging.

Some titles, however, have lots of moving parts and symbol wins that are fully animated, while other releases don't quite offer such details. Legacy of Dead slots belongs to the latter. Winning outcomes are marked with the symbols bulging and becoming covered in a golden light.

It is sure that when it comes to the visual aspect no slots players will ever get bored from this game. An added detail is with the musical theme which contributes with quality to the overall experience.

How to Play Legacy of Dead Slot

Playing the game requires setting up the gameplay features such as the coin value, the number coins which is the bet level and and the paylines. All of the settings can be found in the bottom of the screen, along with the windows that display the bet size and the balance.

The buttons for spin and autoplay are located in the bottom right corner of the screen. The spin button is a blue, round button. Press it once for the sreels to spin once, for a chance to retreive a winning outcome. Each spin deducts the selected bet amount once from the balance.

Legacy of Dead slot has an autoplay function which can be configured by pressing that button. In the event, a menu opens up where you can choose from the automatic spins presets, but you can also add the optional stops which limits the balance use. So you can place a single win amount, or a balance increase amount or a total decrease figure, which can be entered manually in the corresponding fields.

To view the paytable on this game, where you can also see information about the bonus features and game rules, locate the 'i' button in the bottom left corner of the screen.

How to Win Legacy of Dead Slots

Winning outcomes are made with three or more matching symbols, but there are also reel modifiers which can help to money wins in the free spins bonus.

In terms of symbol values, there are two symbols that are the most lucrative on the paytable. These are the wild, which represented by a golden cabinet with a winged scarab on the front, and the second symbol of the same reputation is the golden pharaoh.

Each of these falling in five positions on a payline bring a prize of 5000x on the winning bet. Four of the same pay 1000x and three pay 100x. Even two symbols pay a prize, comparably small but 10x on the payline bet nevertheless.

The other symbols are those of Anubis, which pays 1600x for five and the golden priest mask pays 600x, as does the symbol with blue wings.

The remaining symbols on Legacy of Dead slot are the high cards, between ten and the ace, which pay between 80x and 120x for the optimum win of five matching.

The scatter symbol is the wild. You need three of the same for it to trigger the free spins bonus. In the event, a random expanding symbol is chosen to appear on the reels more often than usual. This symbol can be any on the paytable, except the wild. If you get a retrigger on the bonus you get another expanding symbol.

The players can experience this game as a demo slot, which means it is available for play with free credits, as a demo at online casinos that host demo slots.

The game has a huge exposure of 250,000x on the winning payline, which is to rival that of Book of Dead and Eye of Horus slot. Base game wins have a big win potential especially with the two high paying symbols, which makes sense with the high volatility.

Discover the Legacy of Dead slots by claiming a welcome offer right from this page and play at top notch online casinos.

The Tablet of Amun Ra