Dyamite Digger is a super-dynamic slot game developed by Playtech. The theme is mining and the top prize in the main game is worth 5000x times your line bet. The game has 20 selectable paylines that appear on a set of five reels and three rows. Expressed in real money, the top payout in the main game amounts to £25,000. Dynamite Digger slot doesn't inlcude a free spins bonus game, but the exploding reels feature gives players a chance for a subsequent win with the same wager.

There aren’t too many mining-themed games, but Playtech definitely managed to popularise this genre with Dynamite Digger slot.This is a game that features a top prize of 5,000 coins, which can be a significant amount depending on your wager per line.

We said that there aren’t too many games with a mining theme, but there are quite a few featuring things that are being mined such as gold and precious stones. And frankly, it is easy to see why that is the case. After all, wealth is usually associated with things like gold, diamonds and gems, so all these make a perfect slots theme.

It is important to say that Dynamite Digger slot actually tells a story, it’s not just funny looking symbols all over the reels. You will see dynamites, TNT, mine wagons filled with gold, as well as standard card symbols that can be seen in a number of games – J, Q, K and A.

We’re not living in the 1920s and there are very few actually dynamite diggers these days, but with Dynamite Digger slots by Playtechyou can get a glimpse of that, at least for a few minutes or as long as you’re playing the game.

The symbols are rather large, and the reels take up most of the screen space. The card letter symbols are large, clearly drawn and stylised to match the game’s theme. The buttons are placed below the reels and they are pretty straightforward.

You will see most buttons that are otherwise available on other Playtech games, or slots games in general. The reels occasionally explode, i.e. they explode after every winning spin, so the symbols get rearranged and you get a chance for a subsequent win.

The top prize in this game is £25,000 if you play with a maximum wager, but there a lot other possible prizes depending on how much you stake per spin.

How To Play Dynamite Digger Slot

This game features five reels, three rows and 20 paylines, which is a pretty standard layout when it comes to online slots and in that respect, it is no different than most other online games. The minimum amount that you can wager per line is 1p and up to £5 per line which sets the total maximum wager at £100.

You will notice the ‘Spin’ button placed below the midmost reel and when you click it the reels start spinning. Before you press the ‘Spin’ button you need to set your wager. The wager is set using the + and – buttons placed below the word ‘Stake’. This is the stake per line and if you like you can also adjust the number of active paylines. You can play with all 20 active paylines, or decrease their number to just one.

The autoplay option is also available, and you can choose the number of automated spins and then activate the reels. Of course, you can stop the autoplay whenever you want. There’s also a ‘Bet Max’ button, if you click on it both the number of lines and the stake will be increased to the maximum possible values.

How To Win Dynamite Digger

The symbols, according to their value, are separated into two categories. We can see the deck of cards symbols as the lower valued symbols which include the Jack, the Queen, the King and the Ace. A TNT plunger, a paraffin lamp, a pair of gold wagons, pickaxe, and of course the miner and the dynamite are the high valued symbols.

The interesting thing about Dynamite Digger is that there are no scatter symbols, no wilds or other bonus symbols. You will need to get a combination of at least three symbols arranged across an active payline, from the leftmost towards the rightmost reel. If the combination is arranged otherwise, or the payline isn’t active, now win will be triggered. 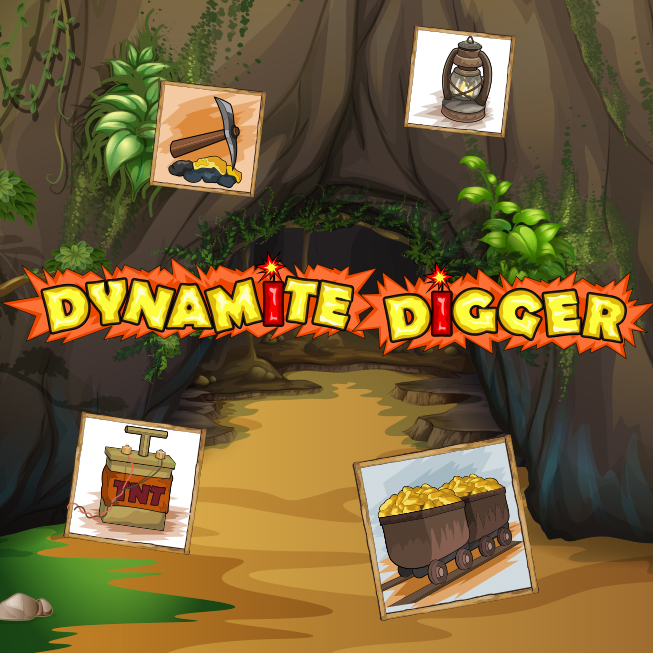 The only bonus feature in Dynamite Digger is called Exploding Reels. Often it is referred to as cascading reels and, as we mentioned above, this feature is triggered after every winning spin. As soon as you land a winning combination on the reels, the symbols will explode, making room for new ones falling from above, which can result in a subsequent win.

Conversely, there are many, if not most, digital slots machines that have bonuses and free spins and many that do not, but that doesn’t mean that games without free spins are not fun. Also, games with no bonus features are more straightforward, there are only two possible outcomes – you can win or lose your game. And after every win when the reels explode the same two options are possible, you can either win again or lose, in which case you can decide whether you want to go for another spin or conclude your gaming session.

Even though this game was released back in 2014, it is still completely mobile optimised and will play on most mobile devices, including smartphones and tablets, across different operating systems including Windows, Android and iOS. There’s no need to download any programmes, just choose a casino from our list of featured sites, claim your bonus and when you log in on your mobile device, you will be able to play Dynamite Digger and the other games they offer.

The free play or demo version of a game can help you decide whether the game is worthy of your attention and once you play out a few or a few hundred spins in free play, you will be ready for the real thing. Still, you may decide that you don’t want to play the real money variant and that’s completely up to you.

In free play mode, you will be awarded virtual funds that you can use to mimic real money wagering. So, you won’t be just spinning the reels, you will be simulating actual wagers and you will have the opportunity to increase or decrease the stake as you play. In case you run out of virtual funds, just reload the game and the amount will be reset. Pretty easy, eh?

The maximum prize that you can win is £25,000, and, needless to say, that can only happen if you play with real money. So, if you’re looking for fun, the free play mode is a great option, but if you’re hoping that you might hit an actual jackpot, you should sign up at one of the casinos featured here and have a go!

Playtech is one of the most respected names in the online gaming industry and their extensive list of high-quality and entertaining online slots is proof for this.The experience that they have is a result of their hard work that started in 1999. Playtech launched their first casino in 2001 and since then, they have become one of the leading operators in this market. Here is a brief overview of some of their most popular games. Feel free to click on the links below to read our entire reviews.

Age of the Gods

The Age of the Gods online slot is the first-ever edition of the famed Age of the Gods slot series, developed and released by Playtech. This is one of the most popular online slots today that features more than seven editions with the same excellent gameplay, yet different setting, bonuses and kickers. The first edition plays on 20 paylines and bets as little as 20p per spin and all the way to 200 pounds. Age of the Gods RTP is 95.02% and there are two bonus features and lots of fun on the reels.

Join the super popular American Dad and his crazy family and join him to Langley Falls. American Dad slot has a top payout of 150,000 coins multiplied by the line bet, and a reel-set arrangement of four rows and five reels. The show related symbols spin on the 40 paylines that are active at all times and there are few bonus games with some of the show's characters. The American Dad slot has an RTP of 94.14%.

Another online slot on our list that's created by the slots experts at Playtech is Thai Princess. So, join the Thai Princess slot to the ancient land of renowned tradition and beautiful landscapes. This game is set on five reels, three rows and a total of 20 paylines. The maximum prize is to the tune of 20,000 and the game comes with a bonus-scatter symbol, as well as a wild that substitutes for all, except that one. The bonus feature is a free spins round that progresses over four levels. The final stage of the bonus leads to an incredible 500x multiplier of the triggering winning wager, not just the line bet, plus the prizes that have been won during the free spins.

The RTP percentage signifies the theoretical return rate for each game. If a game has an RTP of 95%, this doesn’t mean that you can expect to get £95 when you wager £100, it means that theoretically, over a long run of spins the returns would come to 95%, i.e. the house edge would be 5%. We didn’t use the 95% figure accidentally, as this is the average theoretical percentage for most online slots.

There are games where the RTP percentage varies. For example, the Double Bubble slot RTP fluctuates between 95.75% an 96.24%.

The term RTP is often brought in correlation with variance, but the two don’t refer to the same aspect. Variance is the win frequency and it tells you how often you can expect to win vs the winning amounts, i.e. whether you can expect to win lower amounts more often, or more significant amounts but rarely.

Dynamite Digger features medium variance, so in a way, there is a balance in terms of how often you could expect to win and how much you can typically expect.

Playtech did a pretty good job with Dynamite Digger slot. The game has an exciting theme which is developed in a fun and unique way. Even though it was released in 2014, the game still looks pretty novel, not to mention that the graphics are very cool.

The symbols include a range of mining-related objects and cards and the RTP percentage is 95.52%. You can play Dynamite Digger on your computer, or your smartphone or laptop.

Choose one of the casino bonuses from the sites featured here on SlotsWise and get started!

These Are Our Most Popular Offers To Play With