Learn the craft of hammering out mighty weapons and stacks of molten wilds on a game of 4096 ways to win that can spin across six reels and four rows. Players can gain mightier winning outcomes with the help of win multipliers and a free spins bonus that can add extra spins with the help of the scatter symbol. The maximum payout potential of Hammer of Vulcan slot is 20,000x. 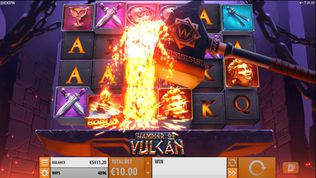 Vulcan was the Roman god of fire, and inadvertently, the god of volcanos and foundries. The Pompeians may not remember him too kindly one might say, but his cult was followed and celebrated across ancient Rome. Quickspin has taken to immortalize this cult even further by creating an online slot to his name. What is more, the game is called Hammer of Vulcan slot, which adds a more warlike ring to it.

Even though the game has some common elements with Warrior Graveyard slot by Nolimit City, both are a class of their own and as equally entertaining and rewarding.

The base game is quite engaging as there is a lot happening on the reel set. Players can get wins with three or more symbols and a number of features. Hammer of Vulcan has a wild symbol that substitutes for the standard symbols and few reel modifiers, such as Hammer Strike, Light the Forge and Strike Again. What is more, players can buy the free spins feature, but at a significant cost relative to the bet.

In terms of graphic design, the players can discover a world of symbols that has been built around the Roman god. The high-paying symbols represent a warrior's inventory, such as helmet, shield, swords, pliers, and a chalice. Make no mistake, a warrior's spirits must be high at all times, so there is also a symbol of a statue's head which may be of the god Vulcan.

Hammer of Vulcan slots is by all means a dynamic game. The reels are spinning in a seamless manner and the symbols can put up a visual display that celebrates the winning outcomes. Some of the animated parts are stunning, such as the hammer landing down on the reels and the scatter symbol erupting. Quickspin has added a stellar tune also to create a full gaming experience.

How to Play Hammer of Vulcan Slot

Playing the game begins with the push of the spin button. Players can do this manually for each spin, or take the autoplay way to enjoy this fiery reel adventure. The spin button is the bigger of the orange rectangles, while the one that is to the right is the buy feature button.

Setting up the autoplay mode can be done through the circular button on the left. This opens up a menu where players can choose the number of automatic spins. Optional settings include placing a prompt for the autoplay to stop when the bonus feature has triggered or when the balance has gone above or under a specified limit.

Hammer of Vulcan slot has a range of bets that can be selected from the Total Bet window. This is where players can work the up and down arrows to browse through the available bets. The smallest bet per spin is 10p and the biggest bet can reach higher amounts.

There are a few more buttons in this game. The fast-forward button causes the reels to speed up when it is toggled. The cog button opens up the settings and the menu button leads to the game rules and the paytable.

How to Win Hammer of Vulcan Slot

Winning at the game requires at least three matching symbols to land across the reel set, starting on the leftmost reel.

Optimal wins are made when six matching symbols have landed, or more, because the 4096 ways to win system makes it possible for two or more matching symbols to land on a row and thus improve the amount of the payout.

There is a wild symbol that can help with the winning outcomes, and there are few reel modifiers that can strike at random in order to convert symbols, add wilds, and so on.

There are multiple bonus features in the game, which makes it even more exciting than it usually is. There are expanding symbols, multipliers, free spins and more.

Three events that represent the extra features of Hammer of Vulcan can trigger in consecutive order.

The wild symbol is the hammer. When it is part of a winning outcome, the game triggers the Hammer Strike, which causes a full reel to convert into a stacked wild.

Light the Forge is the name of the free spins bonus, which activates with three scatters fall on the reels. The wild symbol is available to land and improve or create winning outcomes, but it also adds multipliers of 1x for each symbol.

Strike Again appears only if the ultimate free spin does not result in a winning outcome. This feature improves your chances of getting a win by triggering another spin, and another as long as a win doesn't occur. Each winless spin results in a multiplier of 1x added to the tally.

The game is supposed to become available once Quickspin releases it as a free play demo, or as a practice play slot at online casinos that host their games, including this one.

The gameplay seems quite engaging and the wild symbol is the king-maker here. The bonus feature may not trigger with too many spins, but at least it gives the player a second chance to win, and win potentially bigger sums with the help of the multiplier.

Claim a welcome offer from this page and discover Hammer of Vulcan slots at top rated online casinos.