Players are going to find a layout of three rows and three reels. These spin across five fixed paylines and the math model has a volatility between medium and high. You can play Ultra Hold and Spin with as little as one penny per payline against a theoretical return to player (RTP) of 96.70%. The game may be available as a free play demo slot also, which is helpful to players who want to play Ultra Hold and Spin. 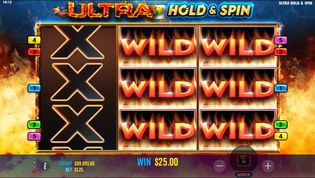 Pragmatic Play have released a game that was made by Reel Kingdom, who have made a foray into classical fruit machines before but this is likely to be their only game in that genre that has three reels and three rows. The name of the game is Ultra Hold and Spin slot and the game looks and feels exactly like the title suggests. The maximum win potential is 500x multiplied by the bet and that's quite a decent amount.

When it comes to gameplay features, Reel Kingdom has furnished their fruit-themed slot with a wild symbol and with a set of classical and fruit symbols. In addition to these, there are the gold and silver medallions, or the so-called money symbols, which are part of the Hold and Spin feature. There is one more symbol that awards the game's bonus prizes and we'll get to that part in just a bit.

In terms of graphic design, Reel Kingdom has made a reel adventure that involves big retro symbols. The game plays quite well on mobile and the designers have made a case in point by making the symbols glaringly big, which reminds of the classical slots machines from the heyday of Las Vegas.

Ultra Hold and Spin slots has a total of 13 symbols. That is quite a lot to include onto a reel set of 3x3 but it works marvellously. The low-paying symbols are cherries, oranges, plums and the X while the medium paying symbols are a gold star and a strawberry. High pays are for the BAR and the burning 7 symbols.

How to Play Ultra Hold and Spin Slot

Anyone who has some familiar with slots by Pragmatic Play are going to find the game easy to set up and quite enjoyable. The familiar layout of controls and buttons starts with the Spin button, seen from right to left. This is where you can find the minus and plus buttons on both sides of the button.

These open up the menu where you can fine-tune your wager. The game can play with as little as 5p which is one penny per line. The maximum wager is £250 and that is quite an extraordinary amount. We are surprised for the expanse of the availability of the coin size, as £50.00 per payline seems quite the stretch, but some high-rollers may go for it.

One way to play Ultra Hold and Spin slot is by selecting the Autoplay button from below the Spin button. This opens up a table with settings where players can choose the number of automatic spins from the presets and add a number of additional settings which can fine-tune the balance spend while in hands-free mode.

How to Win Ultra Hold and Spin Slots

Players can land winning outcomes that consist of three matching symbols across one or more of the five active paylines. The wild symbol is there to help form wins when one or two symbols are missing. The wild is also the most rewarding symbol on the paytable because three of a kind pay 50x multiplied by your bet.

Other valuable symbols are the burning seven which pays 50x also, the BAR symbol which pays 30x, the watermelon and the strawberry and the star which pay 20x and 16x respectively for the last two. In fact, Ultra Hold and Spin slot doesn't have a single symbol that pays below 4x which is quite extraordinary.

The extra feature in the game is the Hold and Win or as it is called in this game, Hold and Spin. The wild also does a bit of its own, by stretching along a reel when it can form a winning outcome.

The silver and gold coins carry cash prizes. These take random values between 1x and 20x your bet. The coins can land on the reels on any spin in the base game.

The Hold and Respin bonus triggers when three silver or gold coins land on the reel in the middle. In the event the player gets four respins that reset each time a gold or silver coin lands on the reels.

Players may also get the diamond money symbol that can appear on reels one and three. When the diamond appears, it awards a random win between 100x and 500x your bet.

This game is available as a free play demo slot just like other releases by Pragmatic Play. Players can try the game and its features with free credits, however, this precludes cash winnings as it can be expected.

The game is a refreshing take on the fruit slots theme. The three reels and three rows get a special treatment to the Hold and Win respins bonus, which does indeed carry a nice payout potential.

To discover Ultra Hold and Win slots choose one of the welcome offers, claim it and play at one of the best casinos on the internet.