Players will find a reel adventure that takes place on a diamond-shaped reel set of five reels and six rows that can yield as many as 30 positions for the symbols. The smallest bet that can let you get a taste of the gameplay is 20p. The theoretical return to player of Choco Reels is 96.22% and the players can select variance between low, medium and high.

Anyone who has a sweet tooth for a chocolate-dipped reel adventure can learn how to whip the cream on Wazdan's Choco Reels slot. The game offers a marvelous take on all the good stuff that are related to sweet delights such as tootsies, lollipops, rocket candy, sugar cane and the like. And while the wrapper appears absolutely delicious, the inside is as equally exciting, because Choco Reels has a maximum potential of 9500x.

When it comes to the game mechanics and features, Wazdan has outfitted Choco Reels with a payout system that removes tiled positions on the reel set. The players can benefit of a wild substitute symbol, land free spins with a scatter, something called the Choco Spins Bonus, win multipliers and overall a great concept for a slot game.

The graphic design on this game follows to the T the dream of every person who loves chocolate and candy. The symbols are an assortment of different candies, each drawn and rendered as realistically as possible. Could you reach in and help yourself to one? You can give it a try! 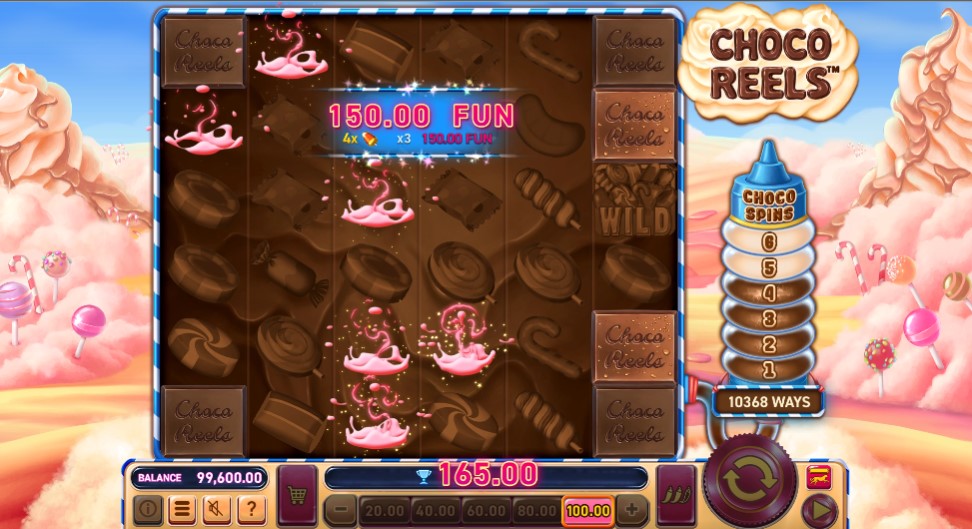 As for the gameplay of Choco Reels slots, it is dynamic, filled with events and fun to watch thanks to the adjacent wins payout system and the breaking of chocolate tiles. Also, the way in which the winning symbols disappear - by melting in their position - is quite a sight to behold. So overall, Choco Reels is one of Wazdan's most original games in 2020 and it's going to hold its own in the time ahead.

How to Play Choco Reels Slot

If you are asking yourself when can I start indulging in all this candy, the answer is, as soon as you look around the reel set, find the buttons that are essential to the gameplay and the select your bet for the game.

The bets can be found at the bottom of the screen in the form of a sliding scale with presets that range between 20p and £100 per spin for the maximum bet. Regardless of the bet, Choco Reels slot always plays across its maximum ways to win potential, which is 46656.

To start spinning, push the fizz drink bottle cap button located in the bottom right corner of the screen. In the right corner from it is the button for autoplay and above that button is the one that lets you select the speed of the spins and there are three levels in that regard.

Another setting is the volatility level. That button has three chili peppers on it and the options are low, medium and high volatility. Another button that can be utilized in the gameplay is the Buy Feature, which has a shopping cart on it and lets players go directly to the free spins bonus, although at a cost of 25x the bet for the Choco Spins Bonus and 50x for the Free Spins Bonus.

How to Win Choco Reels Slots

Winning at the game requires at least three symbols of the same kind to line up starting on the left reel and on towards the right. They need to land on adjacent reels, however, their position on the row does not matter.

Optimal wins are made with six symbols of the same kind. Although Choco Reels slot appears like a grid-base game that pays for cluster wins, the payout system is different, as per the above, nevertheless, it still does the cascading wins which is always great to experience.

These payouts don't seem very convincing but that is only so because of the avalanche/cascading system that can pay more than one winning outcome resulting from the same bet.

The game needs to dish out three or more doughnuts on a platter for the ten free spins to start unfolding. During the bonus there is a bubble gum symbol that adds +3FS whenever it lands on the reels. What is more, each win adds a 1x to the win multiplier tally and there can be no end to that. Also, all 46,656 ways to win are unlocked for the bonus.

The Choco Spins bonus is triggered when all 36 grid positions have been unlocked by the breaking of tiles through landing concurrent winning outcomes. The game grants six spins that start with 1x win multiplier and increases by that number for each win. In this bonus also the number of ways to win is unlocked for the max.

Both of the games are set in a universe of sweet delights and we can suggest that players who are into light-hearted slots that can nevertheless make big payouts, could try both games. Baking Bonanza slot, however, has a notable difference in that the payout mechanic is different and there aren't as many features. Essentially, the latter is released under the Slingo Originals lablel, which means it is unlike standard online slots. Winning outcomes are made by mixing and matching various ingredients in order to make pound cakes, cookies and the like on a grid of 25 squares.

When you play Choco Reels slot, you notice a similarity in that it is also a grid-based game, but it is a lot more dynamic and comes with cascading wins, while Baking Bonanza doesn't. Also, the payout potential is different. The latter game can pay up to 2450x multiplied by the bet while Wazdan's slot can pay up to 9500x. Also, the Slingo Original comes with adjusted variance while the game at hand enables the player to choose the variance level.

Overall, this is a very interesting comparison and both games are exciting to play.

Players can try the game and its feature for free by playing the Choco Reels demo at online casinos that have games in practice play mode.

The slots experts at Wazdan have given this game all of the features from megaways, cluster pays and cascading wins slots and all of that makes it a super fun and potentially rewarding slot.

Discover the Choco Reels slots by claiming a welcome offer right from this page and play at top-rated online casinos.