The legend about the most famous outlaw from medieval times is back! This time, we’re presenting you a slot title developed by Peter and Sons, and Yggdrasil called Robin Sherwood Marauders. Take advantage of the cascading reels mechanic and play with free spins and super free spins for a chance to win 35,000x your bet. Oh, and there are also generous multipliers and expanding wilds to help you along the way. Join Robin in his new reel adventure and read more about the gameplay in our detailed Robin Sherwood Marauders slot review. 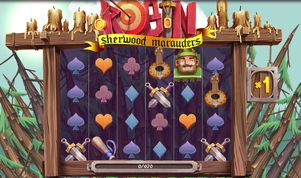 After releasing Johnan Legendarian with its strong visual presentation and authentic feel, Peter & Sons are back with another slot title recognisable and unique in its appearance. Here’s Robin Sherwood Marauders, a game that’s a homage to the story about Robin Hood and his heroic moves in helping the poor.

The 6x4 grid is powered by the cascading engine where winning symbols are “blown by the wind”, let’s say, so that new ones can drop in their respective places. With 4096 win combinations and two versions of free spins, you can look forward to an exciting reel adventure in the woods. We can’t forget the chests of golden coins taken by the tax collectors, as they’ll be beneficial for triggering a couple of in-game extras we’ll mention below.

The Robin Sherwood Marauders slot comes from an independent slot game developer based in Armenia called Peter and Sons. You’ll immediately recognise their style and trademark regarding the design, as they try to implement similar characteristics to their symbols and mechanics, regardless of the slot theme. This one, as we said previously, is inspired by the story of Robin Hood and his ideals of society and helping the ones in need. 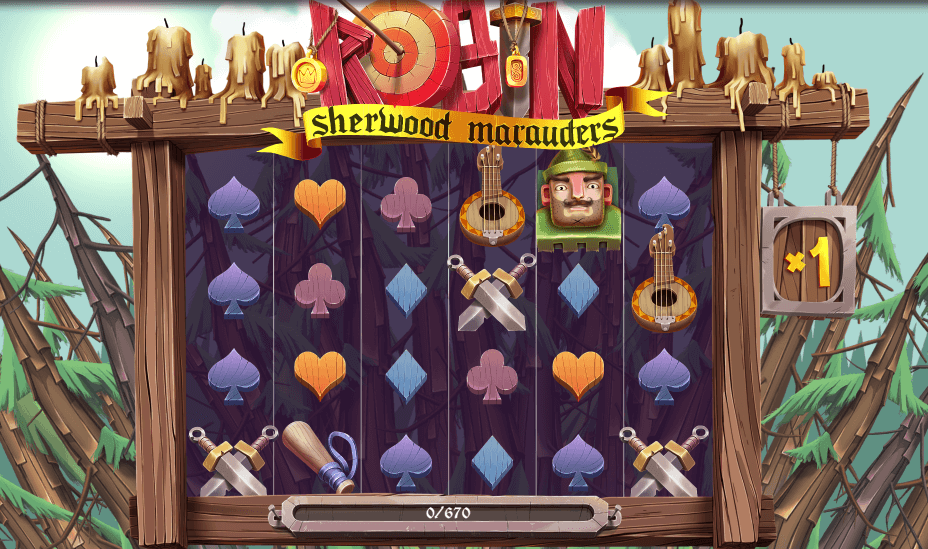 The action is played across 6 reels and 4 rows that feature 4096 active paylines. To win, you’ll need to match at least three symbols on a payline, starting from the leftmost reel. Any wins you form will activate the cascading feature, while the scatters will definitely get the maximum potential out of this slot game.

Before you join the crew of marauders, make sure to set up your bets in the range of £0.10 – £20 per spin. The combination of dynamic reel play packed with attractive in-game bonuses and extras can deliver you a payout of 35,000x your stake in the bonus round. As you can see, this is more than just a slot game paying tribute to the outlaw, and we’ll soon cover the features below.

The Robin Sherwood Marauders slot takes us deep in the Sherwood Forest in front of the reel house constructed from wooden beams. You’ll notice the candles that give a mysterious feeling to the template on the top of it. During the free spin round, the scenery changes to a night setting and the candles are lighting up. The comic, cartoonish and stop-motion feel to the animations fit great to the atmosphere, accompanied by the medieval ambient soundtrack.

Symbols on the paytable include four card suits followed by a club, a lute, a quiver with arrows, swords, the tax collector and of course, Robin Hood himself. Robin is the highest paying symbol on the table and can really spice up the atmosphere if you match a couple of those on a payline. The W, I, L and D symbols form the wild feature and can land anywhere except on reel 1. This symbol substitutes the ones from the regular collection to help create a win. If you’re lucky to form the WILD word across the grid, you’ll win up to 5,000x your bet! 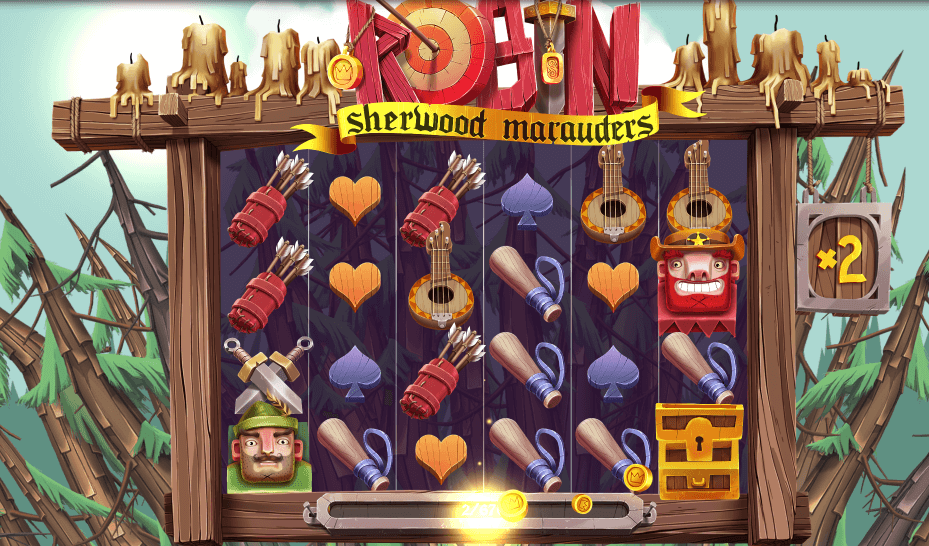 On the other hand, we have the golden chest that acts as the special and the scatter symbol in this slot game. If you land three golden chests across the reels, you’ll trigger the free spins bonus game. But that’s not all. Every golden chest symbol is collected in a special progress bar located just below the reels. When you collect enough points and fill the bar, you’ll unlock the super free spins feature. As we can see, the taxation element has been incorporated pretty nicely here.

The RTP (Return to Player) percentage of the Robin Sherwood Marauders slot is 96.10% which is pretty much industry standard. Moreover, the game’s variance is high, which means that you won’t land very frequent winnings. However, when you win, you’ll win a bigger prize. There’s a chance for you to win up to 16,000x your bet in the base game, while the bonus game gets you closer to the big prize capped at 35,000x your stake. Here you can read more about the Variance, Volatility and RTP in online slots.

Expect a lot of action on the reels of Robin Sherwood Marauders slot, even though it might not seem like that in the first place. We already mentioned the cascading engine that supports the gameplay, while the scatter symbol triggers the two bonus games of this title- the free spins and the super free spins. Let’s see how these features work in more detail:

This feature is triggered as soon as you land 3 or more scatter symbols on the grid. The more chest symbols you land, the more free spins you’ll play with. So, for 3, 4, 5 and 6 chests on the reels, you’ll win 12, 14, 16 or 18 free spins, respectively. The only difference during this bonus game is the scenery and the wild symbol. When this symbol lands on the reels, it expands and covers the respective reel. If used in a win, they are blown off the screen along with other winning symbols.

You’ll see that the multiplier follows the cascading engine, increasing by +1 with each cascading win. Still, the multiplier metre resets after a losing spin, and you cannot retrigger the feature during the game. Usually, in other games that also include multipliers, the metre remains still during free spins, remaining at the highest value by the end of the round.

This bonus game is active as soon as you fill the progress bar below the reels with enough points collected from the golden chests. When you collect enough points, you’ll win 12 super free spins that really get you closer to the big win. Before these spins start, a target will show up on the screen displaying different multiplier values from x2-x10. Here, Robin steps up in the game and shoots an arrow at the target. 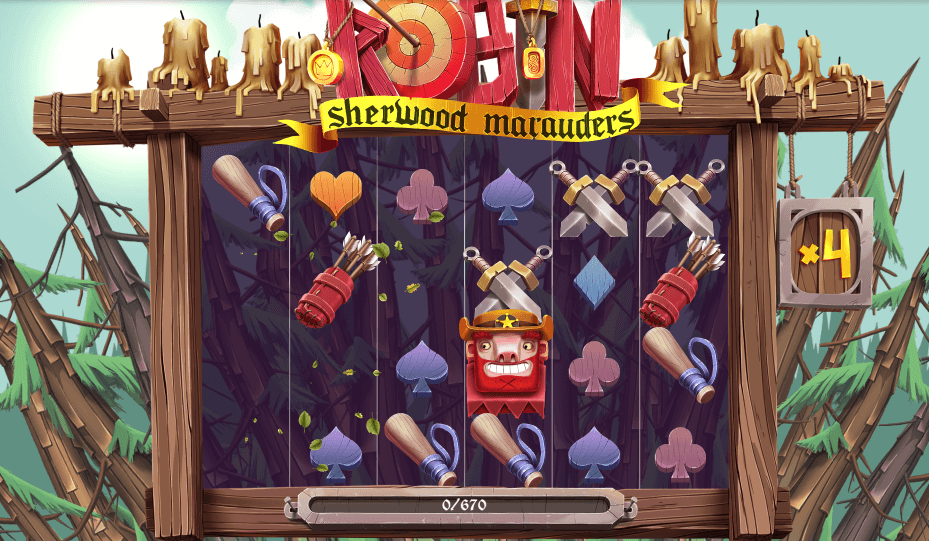 The landing position of the arrow will be your starting multiplier for the round. Also, wild symbols will appear on the reels more frequently, which is a great booster of the game. Each time the multiplier resets after a non-winning spin, it returns to its target value rather than starting from x1 again.

You can play the Robin Sherwood Marauders slot on all desktop, mobile and tablet devices. The game is developed with HTML5, making it mobile-friendly and can adjust to any small screen on any operating system. Therefore, its design, gameplay and bonus features work without issues when playing on a smaller device.

Yggdrasil is a famous slot developer that published many games in the past few months. They’re all different when it comes to the theme, bonus features and potential. Check out their title inspired by King Kong called Krazy Klimber. This title will climb a giant skyscraper in Manhattan to deliver you big prizes and a multiplier that goes up to 1,000x your stake.

For those who prefer to visit the ancient times, let us take you to Rome, where a real reel battle happens, called Legion Hot 1 slot. This is a low variance machine, perfect for beginners or enthusiasts that like to experience a playful, vibrant template and atmosphere with low risk.
Finally, explore the latest sequel from Yggdrasil’s Gigablox series called Gator Gold Gigablox slot game. This is the third Gigablox title in the row that can deliver a prize of up to 20,000x your bet, thanks to the engaging bonus features.

Robin Sherwood Marauders is a decent slot machine with impressive payouts and clever bonus features. The overall action revolves around the scatter symbol that has the power to cause a true reel adventure. Even in the base game, you could win a prize capped at 16,000x your bet, and not many slot machines can live up to that potential. The only shortage for us was the resetting multiplier that can really upset you after a round of consecutive winning cascades. Still, the maximum win potential of an impressive 35,000x powered by the bonus game is something to look forward to once you decide to embark on this adventure.

Claim a welcome offer from this page and discover the Robin Sherwood Marauders slot at top-rated online casinos.