The layout of Fruitnation is three rows and five reels. That seems pretty standard, but what makes the game simple and good at that are the five paylines. Players need to land at least three matching symbols for a winning outcome and the bets start at only 5p per spin. The theoretical return to player (RTP) of Fruitnation is 96.33%. 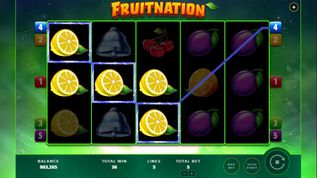 Bally Technologies has turned over to a healthier page for inspiration, for a game that is simply called Fruitnation. You can start a fruit stand with all of the produce on the reels here, and it may do some of us good because the game can shake out some delicious 'winshakes' of up to 30,000 coins.

Players can discover a fruit-themed reel adventure that comes with all of the familiar elements in this genre, plus a math model by Bally's that is worth exploring for its potential. In terms of extra features, Fruitnation slot has none. In fact, zilch is the right word to describe the absence of even a wild symbols, which is a good thing for all the players who know how to enjoy a simple game from the heyday of casino gambling.

In terms of graphic design the players are going to find a set of fruits that have been drawn and rendered in an impeccable manner. Each of them has been given a good treatment in adumbration and on some you can even spot a glimmer of dew, so in visual terms, Fruitnation slots can definitely engage the players.

But just when we thought that the good graphics are as-is, we found out that there are symbols that are animated when they become part of a winning outcome. For example, the famed red hot sevens can catch fire when they've made a winning outcome, which is a cool effect on the reels.

As for the sound design, sadly, there isn't much to talk about. A set of analog sounds is all there is to the game, so it's maybe a good decision to play with the sound off and your favorite music on.

How to Play Fruitnation Slot

Playing the game does not involve washing and wiping the set of fruits. Players can chuck the cherries, lemons, plums, oranges and watermelons directly to the blender that is the random number generator. What about the silver bell and the red seven? Those can go in as well, because the payouts that these can generate are quite sizable.

Nevertheless, Fruitnation slot comes with all of the standard buttons and settings as in any video slot out there. To spin the reels press the bigger of the circular buttons, which can be found in the bottom right corner. This action deducts the bet amount one time from the balance.

Perhaps a more immersive way to play is by engaging the game in its autoplay mode, which can be done by pressing the AutoStart button. This starts the reels immediately for an unlimited number of spins, or until the player presses the button that is to the right of Play, titled Auto Off.

Fruitnation has a wide range of bets that are displayed as credits. 5 translates 5p per spin, which is one penny per payline. The biggest bet is 5000 credits which equals £500.00 per spin. Regardless of the bet amount the game always spins across all paylines and for a chance to trigger the biggest bet.

How to Win Fruitnation Slots

A psychoanalysis of this game takes us to the Bally studios where the designers and slots experts at the drawing board probably thought: simplicity is key - less is more! So they ended up making Fruitnation slots with seven symbols in total. No wilds, no scatter/bonus symbols.

In terms of value, the symbol that is most anticipated is the red hot seven, coming in fives, of course. That outcome pays 5000 credits with a bet of 5, which translates to 500x multiplied by the bet. Four of a kind and on a payline pay 100x and three 10x.

The silver bell pays 250x for five, 50x for four and 5x for three matching symbols. The remaining symbols are fruits, and they pay smaller amounts - between 75x and 20x for five of a kind.

Only one symbol can pay for two of a kind on a payline - the cherries, which results in the wager being returned.

We did say that the game doesn't come with any bonus features, but there is actually one thing that players can do as a way of making your gameplay more interactive.

Following any winning outcome, Fruitnation lets players gamble their winnings for a chance to double the amount for each good guess between the red or the black card, or between the smaller and greater value in the ladder game.

The game is available as a free play demo slot at online casinos that host games by Bally. This enables players to get a feel of the rhythm and overall behavior.

A maximum payout of 30,000 coins is not a bad prospect, but this is only possible if jacking the bet amount all the way high. Players can still win a quite decent 500x regardless of whether the bet is pennies or pounds on the payline.