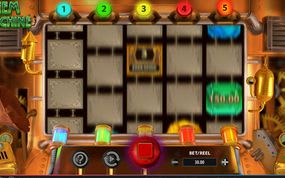 Play for the top jackpot prize of 150,000 coins or one of the other four smaller jackpots, on the Gem Machine slot.

One of the latest games to be released by the renowned Bally company is the Gem Machine slot. Anyone who has a thing for contraptions and concepts that are borderline absurd, will certainly enjoy this slot machine of five reels and three rows. What makes Gem Machine stand out is the idea behind the gameplay. Sure, it plays like a regular slot machine, it has the potential to deliver some amazing payouts, and it includes bonus features - but the main difference is one that makes players love it or hate it.

Basically, Gem Machine slot doesn't display any symbols on the reels, yet the reels are still spinning once you hit the Spin button. So what's the deal, you might be asking? The deal is, winning combinations occur whenever there is a gem that embodies a sum of money and that gem stops on the reels. The best way to find out what it's all about is to simply play the game, and it becomes immediately clear the idea behind the gameplay.

How To Play Gem Machine Slot

Another major thing about this slot machine is the fact that it literally appears as a machine, in terms of the graphics design. Just few seconds on the game and players notice all the details that make the game entertaining and a good slots experience. With a betting range that starts at £0.05 per reel and ends with £30 per reel, the players get a wide range of possible bets that can be made. All this innuendo goes towards the fact that the game has more than jackpot prizes, the top of which, called the Grand Jackpot, is 150,000.00 coins.

To set up for the gameplay what needs to be done is simply select a value from those that are available in the Bet/Reel field, and these start really low in order to produce a bet per spin of £0.25 for a minimum fare at the reels, or the players can arrive at the highest bet of £30 per reel, which gives a total bet of £150 per spin. Now, most certainly, there are about couple dozen bets that can be arranged in-between these sums, which makes the Gem Machine slots a game that offers many comfortable bets for almost any player.

Few gameplay details are due in order. The numbered reels on top of the reel-set serve to toggle them on or off. Basically each number activates that many reels. If you push the number 5, all five reels will be active. Selecting the 1 means that only that reel will be active on this ludacris slots game.

Then, those players who want to set the reel action in motion without hitting the Spin button every time, are able to work with the Autospin button and set the number of automatic spins with the option of setting a winning or losing limit too.

The paytable can be pulled out with the question mark symbol that is in the center of the controls panel. This is where the players can view the symbol pays, information about the Gem Machine free spins as well as about the jackpots.

Besides the five jackpots, the design is the second best thing about this slot machine. It is a machine indeed, and the animated 3D design proves it. There is a machine that is hard at work in trying to produce the winning gems and one of the jackpots in the game.

The players will notice lots of canisters with fluorescent liquid of different colors, bubbling to initiate the process that interacts with the corresponding reel. The winning gems are then absorbed by what appears to be an old gramophone horn and into another machine. Wild imagination indeed.

The top of the reel set, above the break siren and the gauges and the vent ducts, are the different amounts of the Gem Machine jackpot prizes: the Grand, the Mega, the Major, the Minor and the Mini.

How To Win Gem Machine Slot

Winning on any given slot game is always a matter of luck. Knowing that, we are all-right and one with the mother of all luck, that invisible deity that arranges pleasant surprises for some people and makes other wait until indefinitely.

We know that the game lets you buy into the number of reels on which you wish to see the potential cash prizes. There are five reels and each reel can take a bet per reel. The winning outcomes come through the gems, of which there are three, and each one carries with it a multiplier on the coins. The green, blue and yellow gems have nine winning outcomes between each other, and the multipliers start at x1 and go up to x1000.

The five additional types of gems that only some players get to see are laden with one of the jackpot prizes. The green, blue, red, purple and white gems comes with the corresponding sums: 3000; 6000; 30,000' 60,000 and 150,000. These are the mini, minor, major, mega and grand jackpots and each symbol awards instantaneously the amount that is tied to it.

If you are ready to take control of the machine you can start right here, by claiming a welcome bonus for one of the casinos on this page.