Journey into the wild and spin to win on IGT’s online video slot, Wolf Run. 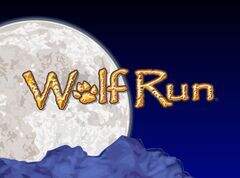 Journey into the wild and spin to win on the Wolf Run slot. With five reels and a generous 40 payline reel-set, you can summon the Indian spirits to your aid and land a mighty winning combination on the online slot that has a Return to Player payout probability of 94.98%.

Play Wolf Run slots for the chance to win cash sums, free spins and multipliers while enjoying incredible symbols as the reels spin, landing combinations in various ways across plenty of paylines! 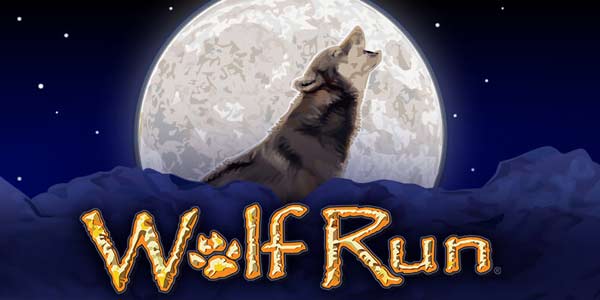 When launching Wolf Run slots, you’ll instantly notice the somewhat native American theme, not only represented by the symbols on the reels, but also the background and design occupying the space around the reels.

The background appears to be made up of forest and mountainous terrain, while the game’s logo at the top is on theme with the o replaced by a pawprint. Plus, just surrounding the logo appears to be a war bonnet, or traditional headdress with decorative feathers.

Aside from the Wolf Run slots design surrounding the reels, much of the great work appears on them too, with plenty of symbols available to land.

The typical playing card symbols make up those of lower value, including 9, 10, J, Q, K and A. The remaining standard symbols, including two separate carved totems, a white wolf, a black wolf and a wolf howling before a full moon. The final symbol also represents the wild.

While the lower value symbols haven’t been designed with the theme in mind, the rest of the symbols have and it’s hard to tell whether or not the wolf ones specifically are photos or drawings. If they are the latter, a lot can then be said about the quality of them if it’s hard if they’re real or illustrated.

Wolf Run slots has a bonus symbol which is just represented by the word and this helps to trigger a special feature within the game, but we’ll explain more on that later.

When you play Wolf Run slots, you’ll need to establish your stake before each spin. This is done by choosing your coin size, as well as the number of paylines you’d like to activate and play across.

Coin sizes increase in increments, starting at as little as 1p, going up to 30p. This amount is the cost of each line and your payouts for landing winning combinations will be a multiplication of this number. You can change your coin size by using the + and - buttons below the reels.

You can then play Wolf Run slots and set the reels off by using the central ‘Spin’ button at the bottom of the reels. Alternatively, you can use the ‘Auto Spin’ feature to give your fingers a rest. This feature will allow you to set the reels to spin consecutively either 10, 20, 30, 40 or 50 times.

Landing winning combinations are made slightly easier with the help of the wolf and moon wild; this symbol will substitute for all others, except the bonus, in order to help create wins.

Aside from landing standard symbols to win cash payouts, the bonus symbol can trigger a special feature when landed in the right places. You can then win more than just cash. 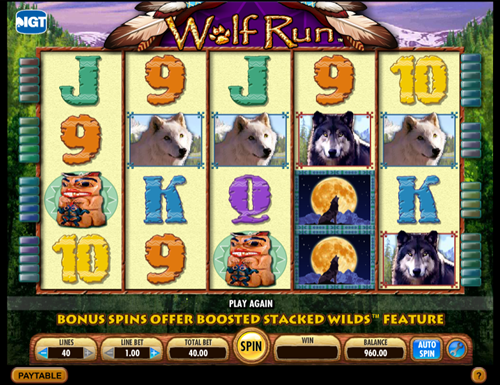 The Wolf Run slots wild comes stacked in this slot game, meaning groups of four or more are stacked up on top of each other. This means there’s a better chance of landing winning combinations, which is great! The stacked wilds are also present within the free spins feature, but with better chances.

Something of a sensation on its release, Wolf Run has witnessed great popularity. Indeed, the later 'sequel', Wild Wolf, is a more advanced choice nowadays, although Wolf Run slots is about more than just fancy visuals. That's probably just as well, since the layout now looks slightly dated. You still get some nice portraits of wolves and the backdrops effectively echo the booming landscape of America is years gone by.

Much of the game's appeal, though, comes from its tightly paced gameplay, and much of that is in evidence here. The Stacked Wilds are no longer irresistible, but it's still satisfying seeming them click into place to secure another high-flying combo.

The Free Spins round is as compulsive as ever. Having just five free spins smacks of meanness, but it's easy to retrigger them - with a substantial maximum of 255 free spins available. And since the Free Spins grid is heavily populated by juicy Stacked Wilds and scatters, you can bag some big prizes while free spinning it.

There are many examples of video slots that are among the greatest slots but don’t have high RTPs. Wolf Run is one of those games, as the Wolf Run RTP is 94.98%, which makes this game a below average RTP slot, but it is the game’s excellent additional feature and overall design that make it worth the try.