We have here an excellent game with basic features and graphics that comes with an exciting gameplay. On five reels and three rows is the Indian Ruby slot, that has a x2 ruby wild symbol that substitutes for all symbols. The scatter triggers the re-spin and the elephant rumble feature, with sticky wilds and scatters. The game's top payout prize is 10,000x on the line bet and there are ten paylines with a smallest bet of just 0.01p. 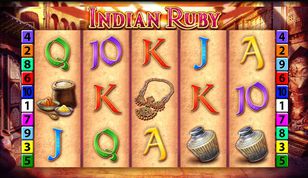 Play the Indian Ruby slot game by Merkur Gaming for a shot at the 10,000x top prize. Land bonus feature and increase the chances for a win.

Merkur Gaming are very popular and have a long tradition of making most excellent online and land casino slots. This company stands behind dozens of titles. Some of these aren't all pots and whistles and that used to be the norm in the land casinos before the splash 3D animation appear on the video slots. Here we have a little of that and a little bit of that classic gaming action on five reels and three rows. The Indian Ruby slot takes us to an idyllic village somewhere on the Indian subcontinent where we may discover the meaning of life or some winning combinations that may turn up a big win or two, for the luckiest players out there.

The game has 10 paylines and these can be selected in number. The game centers around an elephant whose name is Ruby and because it is an Indian elephant all of the adjoining symbols are from that culture as well. The players will find some herbs and spices, pots and necklaces and a mighty ruby symbol which is the game's wild. Otherwise, besides the in-game winnings, there is a cap on the prize at 10,000x coins on the line bet and there is a bonus feature called Stampede which does wonders to the reels, but there isn't a free spins game, which is perfectly fine.

So why not give a chance to the elephants that are ornate with henna drawings and that potentially can bring a stampede of winnings? The Indian Ruby slot game can be explored by claiming a welcome bonus to one of the casinos on this page.

How to Play Indian Ruby Slot

Setting up the game is more than just easy. There are three big buttons in the bottom left corner of the game. This is where the players can set the bet per line, the number of paylines or choose to hit the maximum bet. In the first button, the player opens up the choice of bets. This is a table of amounts that start with the lowest of £0.01 per payline and the highest £1.00. This makes for a good range of bets, both low and high.

The players can make Indian Ruby a penny slot by selecting one penny per line and just one active payline. A high-stakes game constitutes playing the £1.00 coin size on all ten paylines, and that results in bets of £10.00 per spin, which isn't an exorbitant amount of money. That means no matter the amount selected, all players can have fun on the Indian Ruby slot.

There are few other buttons. One is the Autospin function. This lets the players choose from the set of automatic spins that have been pre-set in that menu. Hittin the play button will initiate the automatic spins. The paytable is where the players can discover the symbol pays and gameplay details, such as for the bonus feature. This information can be accessed from the top right corner, where the players can hit the three dash symbol with a dollar sign next to it.

How to Win Indian Ruby Slot

The game offers a range of symbols that are tied to winnings that are quite decent. The game's maximum win is 10,000x and we can guess that this comes as result of a confluence of events: the ruby diamond providing multipliers on the winnings and the elephant stampede bonus feature rumbling with full stacks of elephants.

The ruby diamond is the game's most anticipated symbol because it substitutes for all, even for the elephant bonus. The latter can land on the reels in two instances and award the stampede feature. During this feature if another elephant symbol lands, it stays on the reels. The same happens with the diamond symbol too. These are basically sticky for the duration of the respins.

The Indian Ruby slot diamond provides x2, so each winning combination will get a double if the wild has been part of it. The most lucrative symbol is the elephant, paying 20 for five. Even though there isn't a full-blown free spins game, the elephant symbol triggers a re-spin on the previous bet. This even could go on and on as long as there are two or more of the scattered elephant symbols.

The game design is quite decent and there are animated bits and sequences. The elephant comes to life, as does the diamond, but the other symbols are as static as they come. That doesn’t make a huge difference though, because the game doesn’t purport to be anything crazy in terms of the visual experience. It is a full-blown slot game that provides a reel adventure, however.

To play Indian Ruby start right on this page by claiming a welcome bonus to one of the casinos.