Catch salmons on this Merkur game that has 10 selectable paylines and small bets of just one penny per payline. With an RTP of 96.33% Salmon Catch slot offers to the players plenty to play for as there are two symbols that pay 100x on the bet for five of the same, and one of these symbols is the wild. 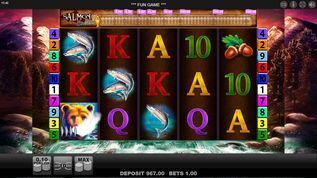 Catch salmon and cash prizes with it on the Salmon Catch slots by Merkur Gaming.

Merkur Gaming are taking us to the Alaskan wilderness for some salmon fishing with grizzly bears. The game plays on three rows and five reels, which spin across 10 paylines, which are selectable. The central theme of the Salmon Catch slot is the wilderness and the animals which inhabit it.

The players can get high and low paying wins with three or more symbols on a payline but there is more than just the base game wins. Salmon Catch offers a meter that keeps a track of the number of fish that have been caught by the bear. This fishing adventure can occur in the base game as well as during the free spins bonus.

By the look and feel of this, the game at hand has all the markings of an online slot made by the slots experts at Merkur Gaming. The graphics layout is familiar and the payouts are on the decent end of things. Certainly, two in-game features are better than one, so this is a game that will be enjoyed by more than few players out there.

An image of a torrential river in its natural surroundings has been refracted twice to create a cool visual effect, which was unusually easy to pull off. The rest of the graphics are quite decent, though, as we have all of the symbols in the high-paying category drawn and rendered really well.

These come together to create an impression of a slot game set in beautiful nature. But Salmon Catch slots doesn't only appeal to fishing enthusiasts, as few spins on the game will turn up the reel adventure behind the pretty pictures to be pretty enjoyable.

Very much a Merkur Gaming move is to leave the games without a real musical theme. There are some slots sounds and exclamations, but a soundscape is missing.

How to Play Salmon Catch Slot

If you are ready to cast your line on the water you can do so by pressing the green Play button in the bottom right corner. But before you do that you may want to check out the size of the bet that you'd be wagering for that spin.

The bet amount is displayed in the space between the bottoms, in the bottom underneath the reel-set. This is the full bet, while the figures that are shown in the square button in the bottom left corner is the bet per payline.

One penny is the smallest payline bet on Salmon Catch slot, while the maximum bet is £2.00 on the line. The game can be played with as little as one payline. This number can be selected by pressing the second square from the left.

Playing on one payline amounts to a bet of one penny per spin, while ten paylines on a penny equal a small bet of £0.10. The biggest bet is £20.00 and anyone eager to cast it at one can press the MAX button and then Play.

How to Win Salmon Catch Slots

Wins are made with three symbols of the same kind, or more, when they post on one of the game's paylines starting on the leftmost reel.

There is a wild symbol on the paytable, which substitutes for all symbols except the bonus/scatter.

Besides being a quite useful symbol in improving the odds for making win outcomes in Salmon Catch slot, the wild, which is a grizzly bear, also pays a significant amount - at 100x multiplied by the winning bet.

Yet another symbol pays a prize of this heft and that is the white-headed eagle, whose symbol brings 100x on the win.

The red fox has 75x for you and the raspberries and acorns pay 45x. All of the stated payouts are for five symbols of the same kind, which can be substituted by the wild in any number of instances on the reel-set.

During the free spins the grizzly wild symbol adds an extra spin and stays on the reels as wild, until a new bear appears, in which case the new symbol stays locked.

The salmon fishing feature is present both in the base game and in the free spins bonus. Each time a bear is on the reels and any of the salmon symbols appear, they go into the bear's mouth and then onto the meter. The top prize there is 50x when 45 fish have been caught.

The real fishing adventure on Salmon Catch slot takes place during the free spins bonus, where the bears add free spins and stay sticky wilds, which means they can catch as many fish as there are on the reels.

The game is available as a free play demo, courtesy of Merkur Gaming, who want to let the players try the game before deciding on playing it with real money.

This is one of the better Merkur Gaming slots we’ve seen in the past two years (2020 and 2019) and we believe many online casinos will hold it on their slots roster.

Discover the Salmon Catch slots by claiming a welcome offer right from this page and play at top notch online casinos.