Discover a hidden nook in the everglades where a voodoo conjurer tinkers with spells in order to create symbol wins. This is a game of three reels, three rows and five always-active paylines. It’s return to player outcome is 95.65% and has the ability to cast a fullscreen of symbols, towards bigger wins and a maximum payout of 6500x. 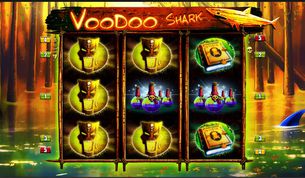 Play Voodoo Shark slot, a three-reel game with the ability to grant re-win spins on a fullscreen of symbols.

An adventure of extreme fishing, and extreme voodoo, it seems, has been brought on by Merkur Gaming. Enter a murky swamp that is home to bedeviled critters, tiki masks and magic potions. The game plays on three reels and three rows across five always active paylines.

How to Play Voodoo Shark Slot

Set up the game's bet by selecting one of the amounts from the button at the bottom left of the screen. Start with the smallest wager of £0.05 or select either of the small increments, which end with a whole sum of £5.00 for the medium bet, or £10.00 for the maximum.

This offering of bets translates to a coin size of just one penny per payline for the minimum or £2.00 for the maximum multiplier on the line win.

To start your Voodoo Shark slot adventure find the green Play button in the bottom right of the screen, press it, and see the reels turn for a chance to win one of the symbol prizes. To set the reels in the autoplay mode, use the button that is to the left of the Play and select one of the pre-set numbers, between 5 and 100.

How to Win Voodoo Shark Slots

The game's paytable is a useful source of information. The players can find out about the symbol wins, gameplay details and how the bonus feature is triggered. Access the paytable by selecting the three-dash and a dollar sound icon in the top right corner of the screen.

The most valuable symbol of the game is the shark, paying a 15x multiplier on the line bet. This is followed by the Voodoo Shark slot wooden board, which pays the line bet multiplying it by four. The real winnings in the game, however, come thanks to the three by three reel-set and its ability to produce a full-screen of the same symbol. In the event, the symbols will pay each way that is held by a payline and it will grant a Re-Win feature, which means, the reels will turn yet another time.

Any pay in this game is made when three of the same symbols fall on a payline. The game contains five paylines, which means there could be more than one line win. Voodoo Shark doesn’t have a wild symbol nor a scatter, so it’s only the game’s all-picture symbols vying for the win.

The game does not have a free spins bonus feature, unless we count the re-win respin. This feature provides one more spin following a win with a full screen of symbols. Each of the Voodoo Shark symbols can fill the entirety of the reel-set. One feature that can be played following every win is the Gamble feature. It is toggled at the player's will from a button that has a red and a black card suit, which is located in the bottom of the screen.

Selecting this button will open up a new screen where the player can engage in a guessing game of luck. Simply guess the card color of the card that's next on the flop in order to double your winnings. The right guesses could go on until the win cap is reached, however, that will be an amount that isn't by any means negligible. The players don't need to go all the way through with this card gamble game. If the sum that's been made suffices, the money bag symbol can be used in order to cash-in on the winnings.

This tiny three-reel slot game was made by Merkur gaming to play on either android or apple devices, be it mobile or tablet. As long as your device supports an online casino launching its platform, the Voodoo Shark slot will launch as well, as it has been optimized for the small screen.

Play the game with the assurance that its return to player theoretical outcome is above the average. The industry's accepted average is 95.00% and that is comparably a lot higher than land casino slots. This game has a steady RTP outcome of 95.65%.

Every once in a time we enjoy playing simple, three-reel games, like the subject at hand. Sometimes these games aren’t any different compared to standard slots when it comes to the potential payouts, and sometimes their low variance accounts for more frequent but smaller wins. This may be the case in Voodoo Shark in terms of the variance, and the symbol pays aren’t at all significant. One caveat is that if playing with the maximum bet, a full screen of symbols could mean decent winnings.

A game of a similar character is the Magic Oak slot, which features four reels, four rows and a jackpot prize.

Play this and many other slot games with a welcome bonus that you can claim to one of the casinos from this page.