Roman Power slot keeps the eternal fire burning with stacked wild symbols that add multipliers in the meter above the reel-set. The game produces winning outcomes with three or more matching symbols across a total of 20 always-active paylines. 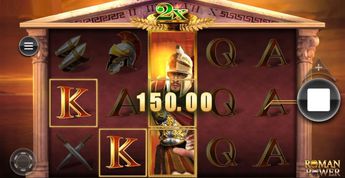 You don't need to visit the Colosseum in order to feel the power of Rome. An online slot developed by Spin Play Games and released by Microgaming takes the best details found across the Ancient Rome slots theme and wraps them in a three by five reel-set that offers multiple features.

Roman Power slot comes with few features in the base game, however it doesn't have a free spins bonus. Playing the game lets you get a feel of a full slots experience even without that bonus. Those who are after high-variance adventures will feel at home with Roman Power, which can trigger winning outcomes of up to 4000x multiplied by the winning bet.

The slots experts at Spin Play Games have harness the full power of video slots in order to create a memorable Ancient-Rome themed slot. The elements that comprise it are the dynamic gameplay, the visual effects and the full cinematic soundtrack. This is one aspect of the game that needs to be tip top besides the potential to pay.

Roman Power slots has a lot of cut scenes where the red banner of the Roman centurions is a backdrop to the feature that is being announced. Big wins are celebrated in fanfare and you can't evade the presence of the fire which engulfs the screen whenever there's been a bonus win. All in all, Microgaming have came across an excellent game to unleash onto the world of online casinos.

How to Play Roman Power Slot

Setting up for the gameplay is quite easy. The paylines are always active at 20 per spin and that is regardless of the amount of the bet. Speaking of it, to choose the bet you need to locate the minus and plus buttons. These are behind the poker chip button which is to be found in the bottom left corner of the screen.

The smallest bet that is offered on the Roman Power slot is 20p and the biggest bet is £50.00 per spin. When we extrapolate these amounts across the paylines we get payline bets of one penny in the first case and £2.5 for a payline bet for the maximum bet. There are multiple amounts between the high and low bets, so the players can choose what suits them best.

To begin the gameplay press hte spin button. This action deducts the active bet once from the balance. The active bet is shown in the very bottom left corner of the screen and the balance in the opposite corner. The autoplay option is available too and it is turned on by selecting from the automatic spins presets.

There is a menu button in the upper left corner where the players can view the paytable and change a couple of settings, for the sound and fast spins.

How to Win Roman Power Slots

Winning at the game is possible by achieving greater wins than lost wagers on aggregate at the point when anyone's decided to stop playing that time around. Wins are made with three matching symbols and can occur on one or more of the 20 paylines.

Roman Power slot has a wild symbol that substitutes for any other symbol. There are high-paying and low-paying symbols on the paytable. In the first category is part of a centurion's inventory: swords, shin guards, shield, torso and helmet. The highest paying symbol of these is the helmet with 12.5x multiplied by the bet for five matching symbols.

The most valuable symbol in Roman Power is also the most lucrative - that of the centurion, which is the wild and bonus symbol all in one. Five of these symbols on a payline pay 20x multiplied by the bet.

The so-called Hero Wild symbol can stop on the reels as a single-square symbol or it can expand when there is a winning outcome on the reel-set or if there are just enough symbols for one but a wild is missing.

When the Wild Hero symbol expands it triggers a multiplier. In the event, a fireball shoots from the wild symbol and towards the top of the reels, where the game can display a multiplier value of up to 10x for the current win.

The games available as a free play demo on Microgaming-powered platforms and wherever online casinos have practice mode for their slots.

A high variance game with a set of decent symbol payouts could mean big wins and many blanks. Only one feature can make that possible and that is the expanding wild along with a high multiplier on the wins. It seems quite alright, even though a free spins bonus is missing.

Discover the Roman Power slots by claiming a welcome offer right from this page and play at top rated online casinos.