Gonzo’s Quest slot has already become an iconic game and it is one of the most popular games not just by NetEnt, but also in general. The game was released back in 2011, but it is still played on a large scale and there are plenty of online casinos that still list it at the very top of their homepages and offer various Gonzo’s Quest bonuses. It is even possible to play Gonzo’s Quest demo which is a great option for players who haven’t played the game before, as well as for those who have played it a while ago and would like to refresh their memory.

Speaking of refreshing your memory, if you want to remind yourself of Gonzo’s Quest and what the game is all about, check our Gonzo’s Quest review, where you can read more on how to play Gonzo’s Quest, what does it take to win, as well the bonus features, which in this case is just one.

In Gonzo’s Quest demo you can do exactly the same, but in a more direct manner, through gameplay. And the best part is that you will have access to all options and settings that are otherwise available in the real money mode. 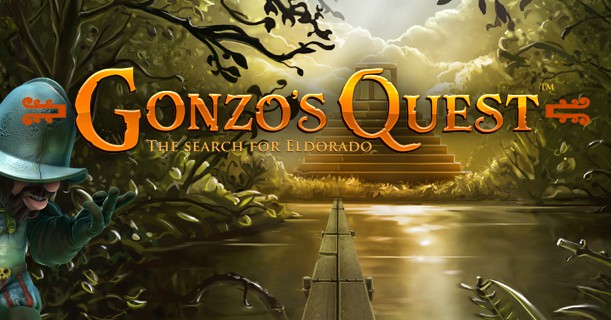 One of the reasons why Gonzo’s Quest is so popular is the enticing gameplay. And that makes the game perfect for casual play. In other words, Gonzo’s Quest demo offers all the fun of the real money version, without the risk of losing funds. However, you can also use the demo mode as preparation for real money play.

Gonzo’s Quest features five reels and 20 paylines, so in that respect it is a pretty standard game. You can play this game with a minimum of a penny per payline, but you may increase your wager up to £10 in which case your overall wager would be £200.
Now, £200 is a lot of money to stake on a single game and if you’re playing with real money that would be quite risky. However, if you’re playing the game in real money mode, you will be able to wager as much virtual funds as you want.

If you run out of virtual funds, all you need to do is reload the game, or open a new tab. By changing your stake and trying out different options you will get a feel of how the game works and what you can expect once you decide that you want to play it in real money mode.

Even if you choose not to play Gonzo’s Quest in real money mode, nothing’s lost anyway, because the demo mode is completely free.

Gonzo’s Quest has an RTP of 96.00%, which is one percent point higher than the average RTP of 95.00% which means that it falls in the above average category and if you play Gonzo’s Quest demo long enough you’ll definitely notice that.

There are plenty of SlotsWise casinos that include Gonzo’s Quest in their library, so you’ll have plenty of options to choose from if you decide to play the game in real money mode.