Join the cute little aliens in the exciting reel adventure provided by Play’n Go. Reactoonz is an online slot that plays on 7 reels and 7 rows. It’s an alien-themed game that uses a cascading reels feature that allows you to form more winning combinations in a single spin. With every win you form, you’ll charge up the meter to trigger one of the Quantum features. This highly volatile slot machine allows you to benefit from wilds, transforming symbols, mega symbols, multipliers, and more. In total, you can end up winning 4,570x the stake. Find out more in our full Reactoonz Slot Review below. 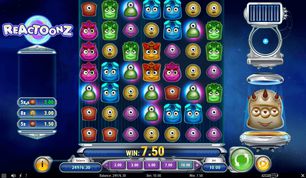 Outer space has always been exciting, but frightening at the same time. We are all curious about what’s ‘out there’, but we’re also scared of what we’ll find. If it’s something like this game, then we’ll be more than glad! Meet the cute aliens in the Reactoonz slot from Play N Go – an online slot game with a cascading engine and a chargeable bonus feature meter. Available to play across desktop and mobile devices, like everything from this developer, the Reactoonz slot game offers fair gaming and high returns. Keep reading to find out more! 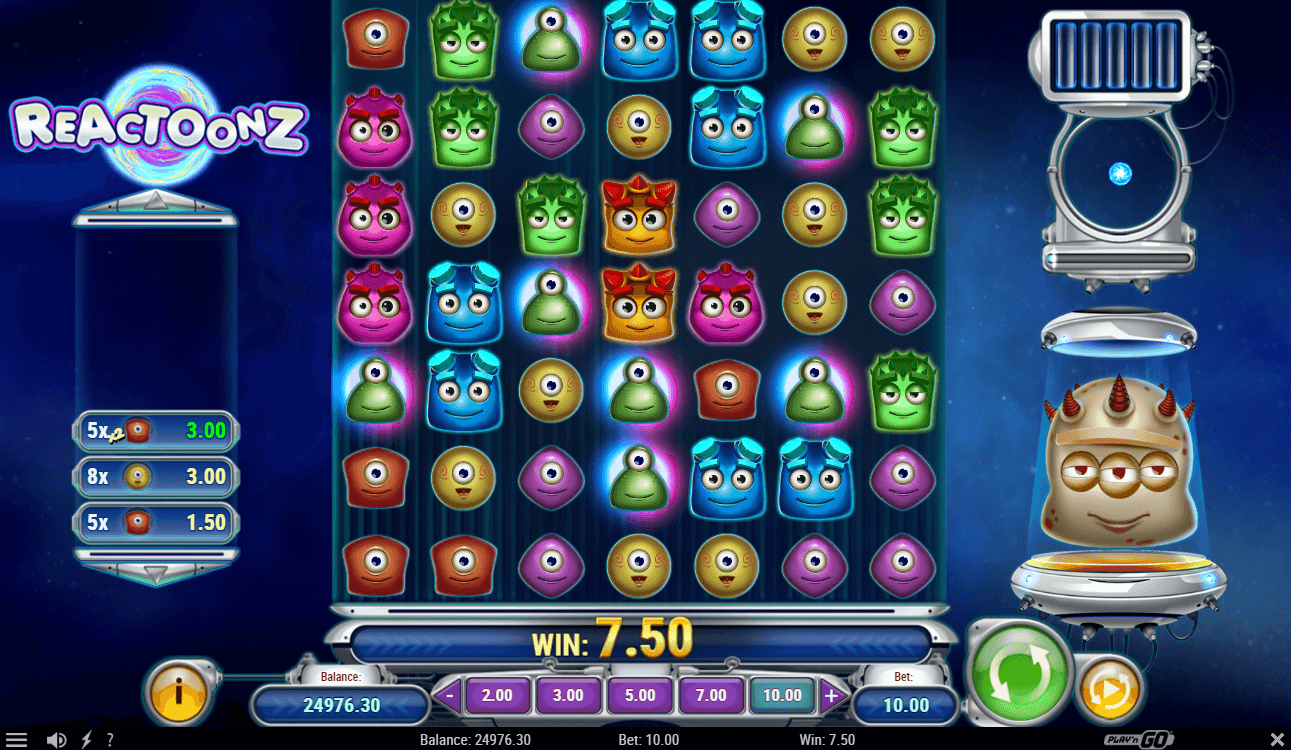 Coming from Play’n Go, the Reactoonz slot features 7 reels and 7 rows where symbols fall in to create matching combos of at least five, horizontally or vertically. Those symbols will then disappear and new symbols fall in to replace them. This means that there are no fixed paylines and your goal is to land clusters of matching symbols.

Since there are no paylines in the Reactoonz slot, the only variable you’ll need to set is your bet. This can either be done by choosing one of the five suggested bet values at the bottom of the screen, or go through all options by clicking the “-/+” buttons on the left and right side of those suggestions. The betting range goes from £0.20 to £100 per spin. When you are ready, press the green button with the circular arrows to start spinning the reels. For all other information you might need, including game rules, bonus features and payouts, click the ‘i’ button in the bottom left corner of the screen.

In Reactoonz, the maximum win you can reach is set at 4,570x the stake, which is great. This can be achieved through the game’s bonus features, which in this case, are plenty. Play’n Go has packed the Reactoonz slot with a wide range of extras so you can win different modifiers to boost your gaming experience. You can find the features and learn how to trigger them below in our Reactoonz Slot Review. 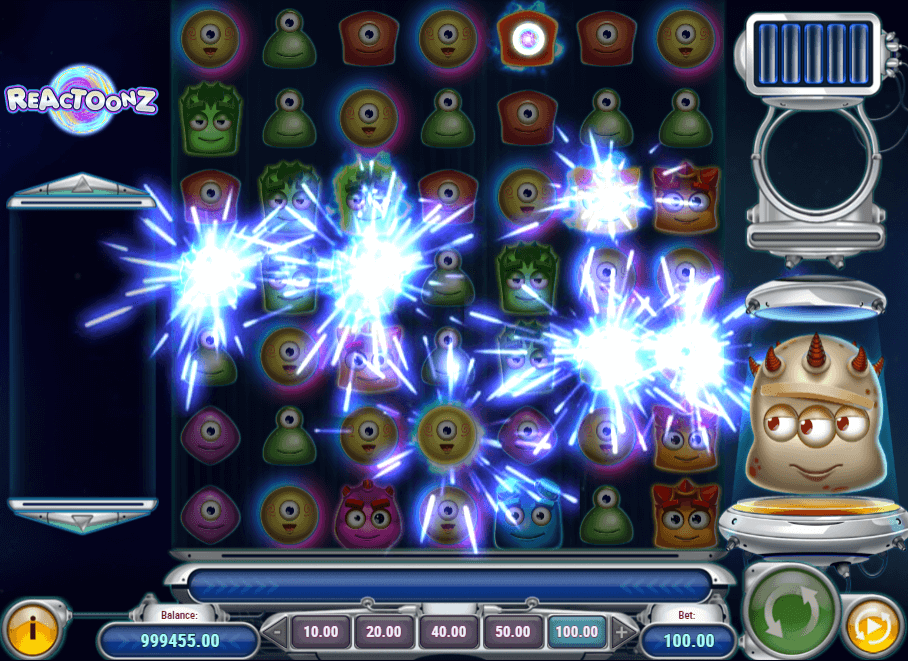 There are eight standard Reactoonz characters – pink, green, orange, blue, purple, brown, dark green and yellow. Little one-eyed aliens offer smaller prizes, while higher value aliens each have two eyes and different horns to make them stand out. The Wild is a vortex.

These critters are set on a blue background and each of them is slightly animated, bobbing up and down a little, blinking, or looking around at the aliens next to them. There’s some extra-terrestrial machinery on both sides of the reels, including what looks like a transporter device, while to the right side, there’s a giant three-eyed, multi-horned beast sleeping peacefully, waiting to be awoken by the sound of a bonus feature being triggered.

The Reactoonz slot’s RTP is 96.51% which is the industry average for online slots. The game’s variance is high on the scale, which means that you won’t land very frequent winnings. However, when you win, you will win big. The maximum payout is set at 4,570x the stake, which is fair considering the highly volatile math model. In this Variance, Volatility and RTP guide, you can read more about different math models in online slots.

Gameplay and Features on Reactoonz Slot 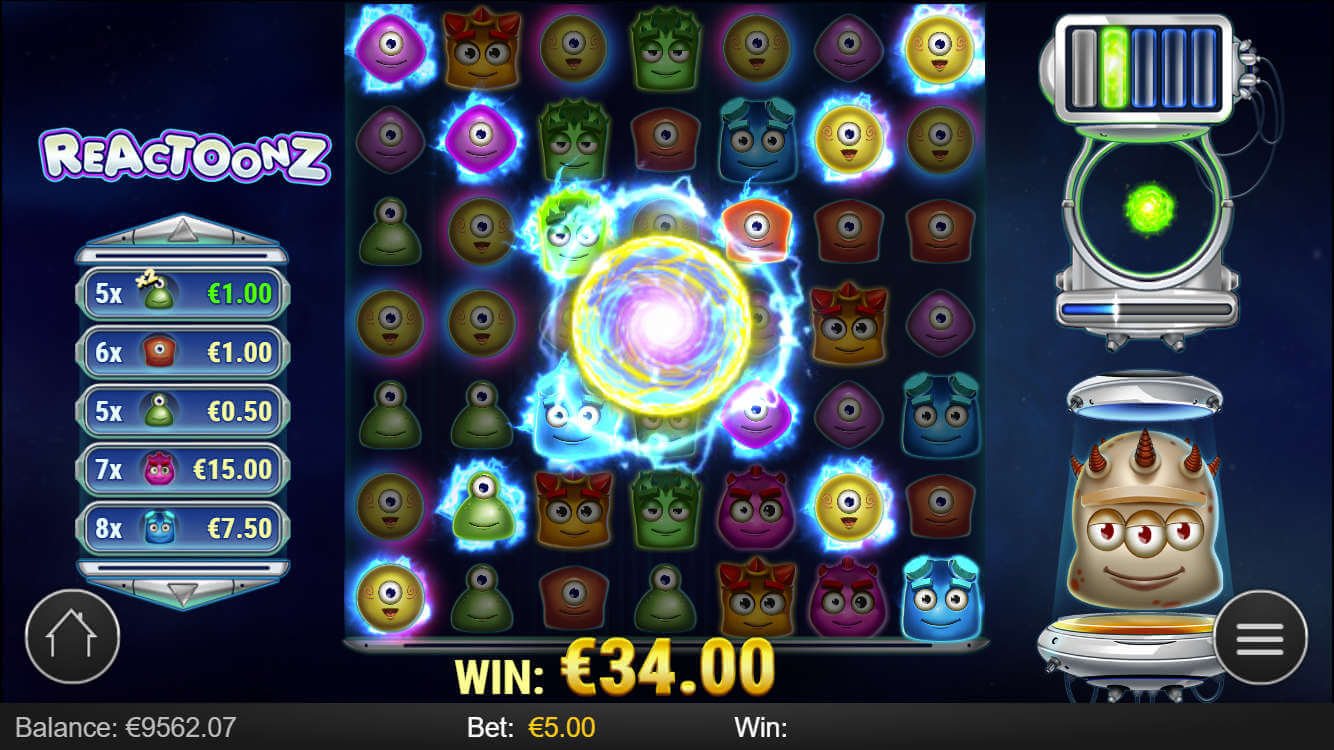 In Reactoonz, the main focus of the reel action is the cascading reels engine which allows you to win more times in a single spin. This engine triggers when you form a winning combination on the reels. Then, the symbols that are part of the win will be removed, making place for new ones to land and potentially form another win. The cascades will keep going as long as you make winning combinations. Besides this, the Reactoonz slot is packed with many other features and extras, and let’s review them in more detail.

Wild symbols don’t appear naturally on the reels. Instead, they can be formed in two ways: 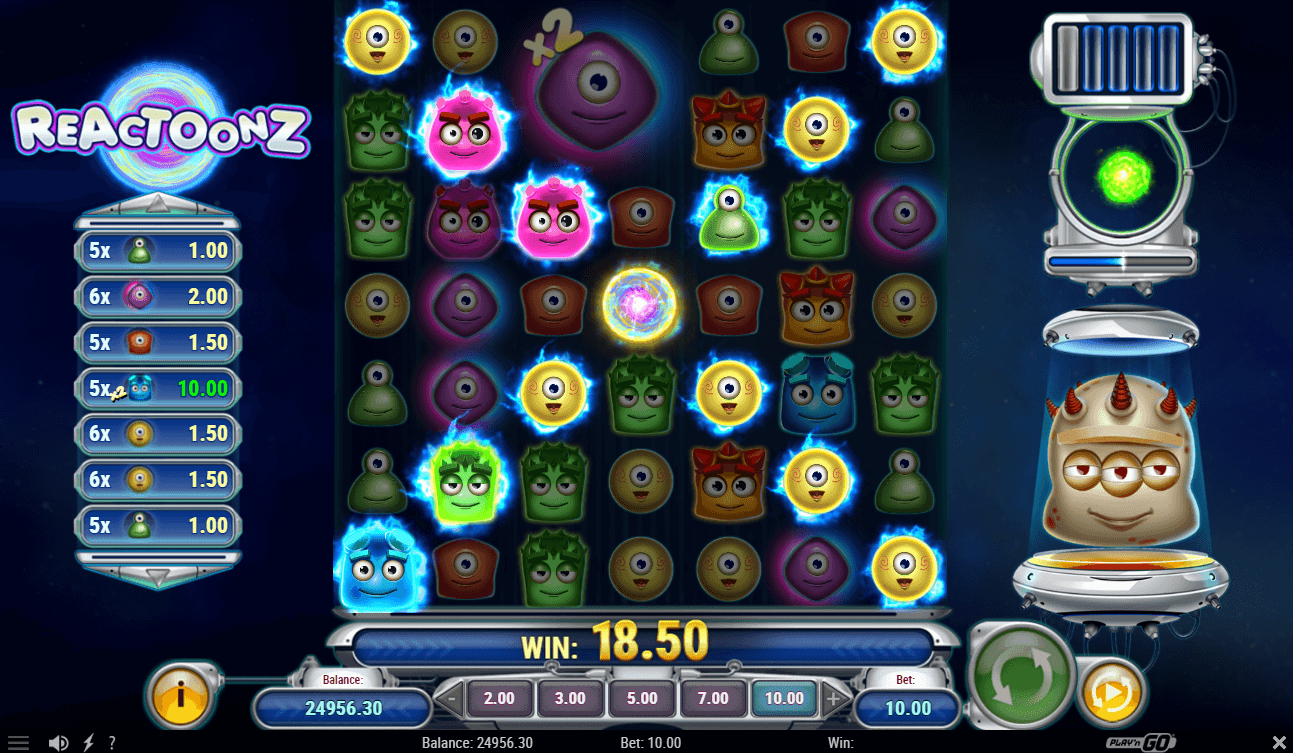 Every time you land 25 symbol combos during standard gameplay one of the Quantum features might be triggered when the spins finish; this can happen four times and the features are the following:

If the Quantum queue reaches the Gargantoon, it will wake up and be added to the reels as a 3×3 wild symbol; with the first successful cascade it divides into two 2×2 wilds and on the second it turns into nine individual Wilds. Also, four matching normal symbols forming a square shape automatically form Giantoonz. Wins are doubled in any combo that Giantoonz are part of.

As you’d expect from a Play’n Go release, the Reactoonz slot is mobile optimised and can be played on any desktop, mobile and tablet device. It is developed with HTML5 and can adjust to any operating system.

Kudos Play'n GO slots experts for bringing back your famed and one of the best grid-based game in the realm of online slots. So how do the two Reactoonz slot games fare compared to one another? For starters, the similarities: players will find the same number of horizontal and vertical rows and squares on the grid. Then there are the symbols, all of which are animated with a nice touch. And there are the reel modifiers.

Now, in terms of specifications and game facts, we have some notable differences. The theoretical RTP of Reactoonz 2 is 96.20% which is slightly lower compared to the first game, which had an RTP of 96.51%. Both games have a high variance math model and a range of bets between 20p and £100. The notable difference is in the payout potential where Reactoonz 2 slot can reach up to 5083x and the present game has it at 4570x. 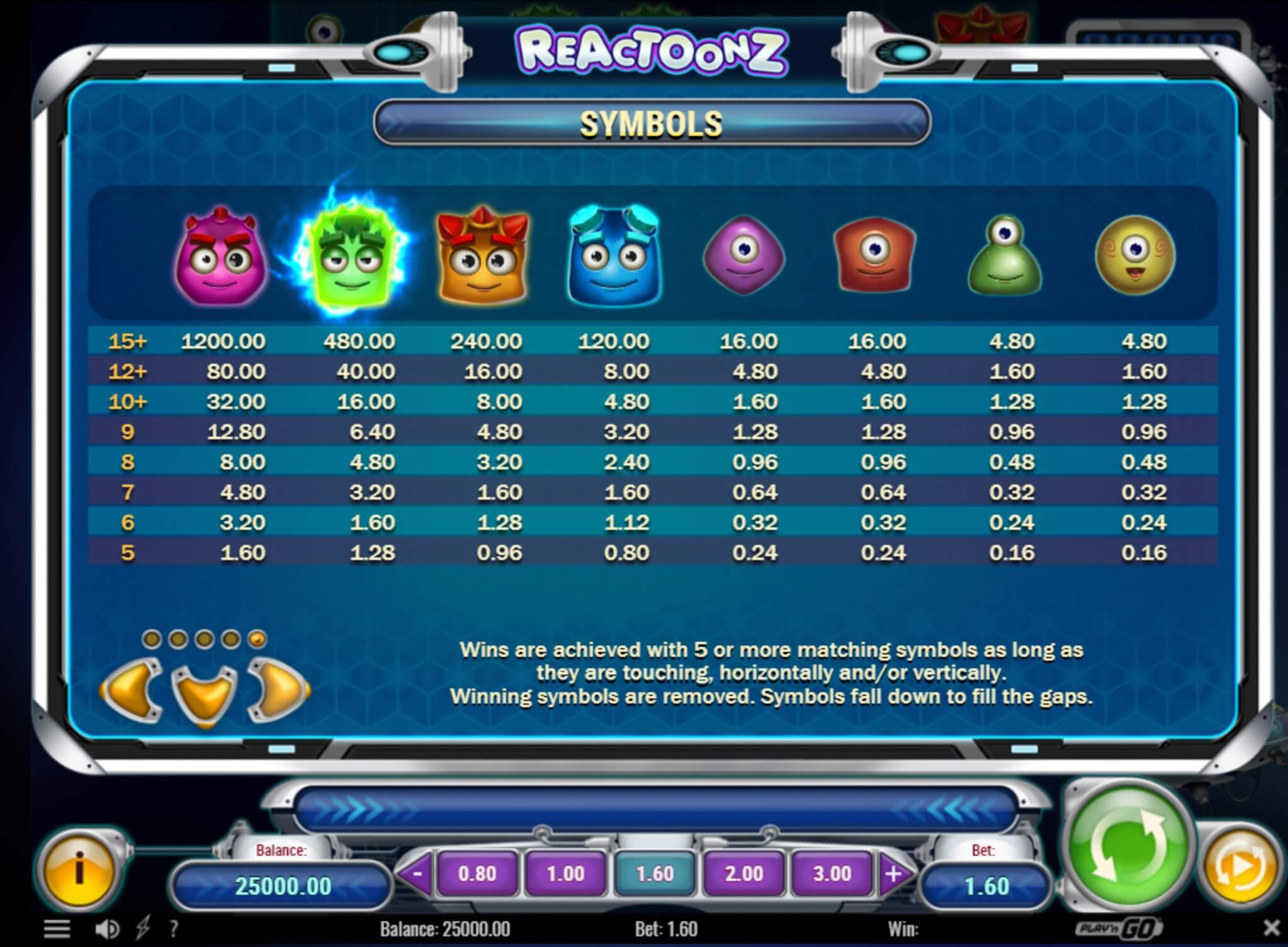 Play’N Go is one of the leading companies when it comes to developing online slots games. Their collection of games come in 30 different languages, unique entertainment, personalized experience and full HD picture. Aside from Reactoonz, some of the most popular Play’N Go slots are Book of Dead, Big Win Cat and Cloud Quest. If you want to get more details about these games, feel free to click on the links below.

Play’N Go based the Book of Dead slot on one of the most popular slots themes, Ancient Egypt. The Egyptian related symbols spin on five reels and ten paylines. While spinning the five reels, you’ll have a chance to trigger the Book of Dead free spins bonus feature, if you land the required symbols combo. There is also a gamble feature, where you can double, quadruple or also lose your most recent winning. The Book of Dead RTP is 96.21%.

The second Play’N Go slot game on our list is Big Win Cat that has three reels and five fixed paylines. This online slot has three bonus features, the Wheel of Multiplier and the Respin of Luck. Big Win Cat slot game is based on the fluffy Asian cat, which is known by the name “maneki-neko”. The overall design is really colourful and cheerful. The Return to Player rate for the Big Win Cat is 94.23%.

If you want to try out an online slot that is based on the fantasy world, then Cloud Quest is the right choice for you. Play’N Go decided to try something different with this game and offer the players something slightly different. As a result, some people are placing Cloud Quest slot in the arcade game category, rather than slots. Nonetheless, this game has two bonus features, the Super Power Respins and the Bonus Game. Cloud Quest slot has an average return to player (RTP) of 96.52%.

That's right, we have tried to go for "Gargatoon" ourselves in a 100 sppins challenge on the Reactoonz slot.  As with all of our other spin challenges, remember that this is just what our experience was like in our first 100 spins.  It doesn't necessarily mean that you will have the same experience, this is just so that you can see how the slot works and what you might expect to find!

Reactoonz slot may sound complicated, but it’s in fact really simple once you start playing – it’s fast-paced, fun and can also be very lucrative as you can win up to 4,570 times your stake on every cascade/spin!

Give Reactoonz slot a try and see colourful aliens explode!

Does Reactoonz slot have a Free Spins bonus?

Play'n GO, the makers of this famed masterpiece did not include a free spins bonus. On the other hand, players can gain potential big wins with the help of the cascading wins payout system which can generate multiple prizes from the same spin.

Where can I play Reactoonz demo slot?

The game is available at the online casinos that are reviewed and confirmed as legit right on this page. Some casinos enable players to play Reactoonz in practice play mode with free credits.

What is the Reactoonz RTP?

The theoretical return to player (RTP) percentage of this game is 94.51%. This is a 1.5% below the average but this is only because the game is stacked with reel modifiers that can trigger on any spin.