Players are going to find the same crazy action-filled grid of 49 but better, more energetic and a lot more fun. All of these upgrades welcome anyone to try and play Reactoonz 2 slot for a chance to land clusters of 5 or more symbols. You can wager as little as 20p per play on a game that comes with high variance and a theoretical return to player (RTP) of 96.20% on average. 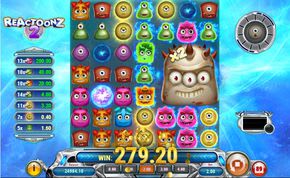 It's time for a trip to outer space, through a wormhole and straight to planet Ractoonz 2. Play'n GO didn't let their original game to age like a fine bleu cheese even though it fulfilled every condition for that praise. Instead, the company has built their follow-up which they aptly named Reactoonz 2 slot. The game follows its predecessor to the T and comes with a maximum win potential of an amazing 5083x multiplied by your bet.

In terms of gameplay features, players are going to find the same symbols but a bit more polished. Feature-wise, Ractoonz 2 abounds in reel, or should we say, grid modifying features that can expand the symbols, explode them, make them grow into colossal things and more. The Energoon and Gargantoon wild symbols are always welcome on the grid and the cascading wins is just the game mechanic for the fast tempo of the new Reactoonz.

One of the best details about the game is that the pace of the spins, or drops if you will, is quite normal. A lot of the games today can make 100 spins in a breeze if you set the autoplay mode, but not the Reactoonz 2 slots. You can set the game to 100 spins in autoplay and enjoy all of the fun-loving graphics and the visual effects that are created thereof when you land winning outcomes.

If you play Reactoonz 2 you will find a lot of moving parts. Each critter smiles, buzzes, shakes and if you are oftentimes lucky, pops and disappears from the grid. There is a lot of electricity on the reel set and behind every single of the creatures. The soundtrack is also quite on par with the speed and the theme of Reactoonz 2 and we are certain most people are going to leave the mute button untouched.

How to Play Reactoonz 2 Slot

Players can start inviting these alien beings to the teleporting pad by pressing the green circle with the two arrows inside. This is a type of a game that should be played in autoplay mode. The game dynamic just demands it and Play'n GO has included this option.

Pressing the red circle in the bottom-right corner opens up the table with settings for the autoplay mode. Players can select the number of spins and press play or add some of the optional controls.

Reactoonz 2 slot comes with a wide range of bets that begins at 20p per spin and ends with a maximum of 100 pounds. Players can change the bet between any two spins, as long as you are not in autoplay mode.

Another button that may come as useful is the yellow 'i' button. Pressing it will open up the paytable that informs players about the cash prizes that can land from any specific number of symbols in a cluster.

How to Win Reactoonz 2 Slots

In order to receive a cash prize you need to get a cluster of at least five matching symbols. Optimal payouts are made for winning combinations of 15 or more symbols. The game has a wild symbol that comes by way of the Fluctometer.

This can happen when the randomly-specified symbol in the upper-right corner fills the meter. This prompts Reactoonz 2 slot to throw in one, two or three Electric Wild symbols.

Another wild symbol can land on the reels, called Uncharged Wild. These are non-reacting symbols unless they end up being adjacent to a winning combination, in which case they become Electric Wild.

In terms of payouts there are four one-eyed and four two-eyed Reactoonz. The smallest winning outcome of five of a kind can pay between 0.10x and 1x across the board. Six and seven can pay between 15x and 3x and so on. More than 15 symbols result in payouts between 3x and 500x your bet.

There are several extra events that can modify the reels. The Quantumeter is the first we'll review. The contraption on the right-side of the reels collects non-wild symbols that have been removed by the Electric Wild. Once the Quantumeter has been filled up it releases the Energoon. The meter has four benchmarks that correspond to four levels of power.

Each charge releases the Energoon Wild symbol in a different capacity - taking up 2x2 or 1x1 on the grid. Unless, you'r Quantumeter charges up to level four which adds 2x multiplier and the Gargantoon wild symbol in its 3x3 state. Every cascade that follows a winning outcome caused by the Gargantoon, the game shrinks it in size, first to two 2x2 symbols and then to its 1x1 state across nine positions, before it disappears.

The game has another reel-modifying feature: Wild Pair Explosion. This occurs when there are two electric wilds that are adjacent and all symbols between them have been removed. In the event, the wilds can destroy a wide circle on the grid.

Play’n GO has released the game as a free play demo slot and players can discover it at online casinos in Practice Play mode where the credits are free but the winnings are just for show and are not paid in cash.

This is definitely an improvement compared to the original game and we expect the first one go go down the memory hole pretty soon. It looks like all other gameplay specs are similar so players will have a great new reason to pop some of those Reactoonz.

To discover Reactoonz 2 slots choose one of the welcome offers, claim it and play at one of the best casinos on the internet.

What is the Reactoonz 2 RTP percentage?

Pro players know that 96.20% for the theoretical return to player percentage is excellent for a game that has multiple reel modifiers and a big payout potential.

Where can I play Reactoonz 2 slot?

The game is available at several casinos that we have verified and reviewed. To play simply claim one of the available bonuses and explore the casino lobby.

Can you play the Reactoonz 2 demo slot?

Simply said, yes, players can play the demo game and try out the features and the payout frequency with free credits. Some online casino enable you to try the game in practice play mode and to get to it, you can check out the casinos on this page.