Slingo Starburst combines the most popular online slot game with the Slingo concept, so you’re getting an innovative and top-notch gaming experience. There, you’ll come across the well-known colourful stars and gemstones from the Starburst slot, as well as a 5x5 Slingo grid and a single row with 5 reels. Your job is to climb the Win Spin ladder and win payouts of up to 1,500x the stake. And how to do that? Find out in our Slingo Starburst Review! 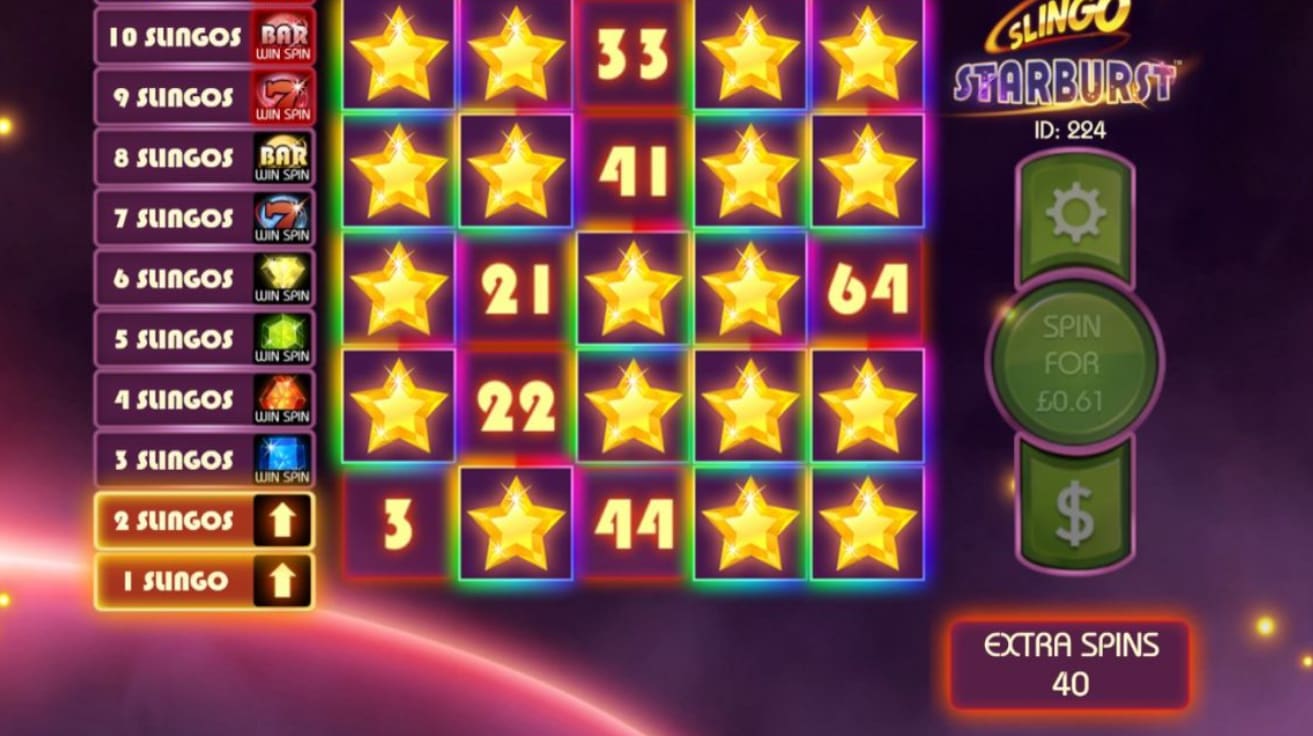 There’s literally no online slot player in the world who hasn’t heard about the Starburst slot from NetEnt. Starburst is one of the most widely played online slots in the world. The game has 5 reels, 3 rows and 10 paylines, and comes with some impressive features from which payouts of up to 50,000x the stake can be won. Now, Slingo Originals released a new game that is a collaborative creation between the Slingo mechanics and Starburst - Slingo Starburst.

Fans of the mega-popular Starburst slot finally have something new to try their luck at. Slingo Starburst allows you to play a slot/bingo hybrid game based on the popular slot game. There, you spin the single row composed of 5 reels, and you get 10 regular spins per round. At the same time, there is a 5x5 Slingo grid above the reels, composed of different numbers. To start playing, you need to place your bet per spin which ranges from £0.20 to £25.

The idea in Slingo Starburst is to land numbers on the reels which are equal to the numbers of the grid, and therefore mark them off. To win Slingo, you need to form a full horizontal or vertical line with marked off symbols. Each Slingo moves you up one position on the Win Spin bonus ladder located on the left side of the screen.

The Slingo Starburst slot comes with a couple of extras, from which you can win up to 1,500x your stake. The bonus ladder comes with many valuable symbols that can give you great prizes. You need 3 Slingos to get to the lowest value symbol, and 10 Slingos to win a Full House. To learn how to get the most out of the bonus ladder and the features, carry on reading our Slingo Starburst Review.

The Slingo Starburst slot has a very similar design to the Starburst slot, so you might be familiar with it. The single reel and the 5x5 Slingo grid are placed on a dark purple background that has high-class graphics and animations. The main focus on the screen is the Slingo grid, composed of different numbers which turn into stars when they’re matched on the single reel. Below the grid is, of course, the reel that you spin and reveal the numbers. The right side of the screen is reserved for placing bets and hitting the spin button, while the left side displays the bonus ladder with respective symbols.

The gameplay is accompanied by a nice, smooth soundtrack which perfectly fits the theme. Overall, it’s an excellent game in terms of its design, symbols and graphics. Speaking of symbols, you’ll find the standard 5 gem symbols from the Starburst slot in purple, blue, orange, green and yellow colours. Then, there are the lucky 7 and bar symbols, as well as the Starburst logo which is the wild symbol, substituting for other symbols to help create winning combinations.

The theoretical Return to Player (RTP) percentage of Slingo Starburst is set at 96.50%, which is the industry average and we are glad about it. At the same time, the game comes with low to medium variance, meaning that you’ll land frequent wins that are lower in value. This kind of slots is ideal for players who look for longer gameplay sessions and a relaxing gaming experience. In addition, in the Slingo Starburst slot, you can win as much as 1,500x the stake, which is great for a low-medium variance game. In our Variance, Volatility and RTP guide, you can learn more about different slots models and their levels of risk.

Slingo Starburst has dynamic and exciting gameplay. It’s a hybrid between the popular Starburst slot and the Slingo mechanics. For those who don’t know, Slingo combines elements of both slots and bingo games, so in Slingo Starburst, you’ll find slot reels and a bingo grid. Your job here is to spin the reel and reveal numbers that should be matched with the numbers placed on the grid. All in all, it’s a fun gaming experience that comes with some interesting features and extras. As we’ve mentioned above, every horizontal and vertical line on the grid will give you a win (Slingo). Those wins will help you climb the bonus ladder and win excellent prizes.

There is the Starburst wild symbol that can appear on the single reel and help you mark off any number you want on the column above. Then, the rest of the reels will respin. On top of that, you can also land Green Joker hat wild symbols, which allow you to mark off any number on the whole grid. Moving on, there is an X symbol, which is a blocker symbol that does nothing. On the other hand, landing 3 or more purple gem symbols award instant prizes of up to 2x your stake. Wilds can replace the purple gemstones to give you bigger winnings.

As we’ve mentioned above in our Slingo Starburst Review, you get 10 regular spins per round. When your 10 spins are up, you’ll get a chance to play an Extra Spin. Then, a bonus wheel will spin, and it will give you 1 extra spin if it lands on the green part of the wheel. You can win up to 5 extra spins in a row.

The Win Spin Bonus Ladder is what makes this game stand out from the crowd. You’ll find the bonus ladder on the left side of the screen and it displays the prizes you can win from consecutive Slingos. To get to the lowest prize, you need 3 Slingos. Once you land 10 consecutive Slingos, you’ll win Full House and get to the top-paying Bar symbol. At the same time, you’ll receive Expanding Respin Wilds, meaning any wilds that land during the Win Spin feature will expand to cover the full reel. Then, just like in the original Starburst slot, the rest of the reels will respin, and you can get up to 3 wild respins.

Players that prefer playing online slots on the go will be glad to learn that Slingo Starburst is a mobile-friendly slot. The game is built with HTML5 which ensures that you’ll receive a high-end mobile gaming experience. You’ll receive the same quality design and gameplay of Slingo Starburst when you play it from a mobile device.

Slingo Originals is the most popular provider that makes Slingo games from already existing slots and bingo games. Therefore, you can find some popular titles in its game collection. For example, you can check the Slingo Reel King, a low-medium variance game that combines the Slingo concept with the Reel King slot and allows payouts of up to 500x the stake. Another great Slingo Originals release is the Baking Bonanza slot, a game with wonderful design, excellent bonus features, and high payouts. Finally, you can check the Slingo Who Wants To Be a Millionaire game, which is a Slingo version of the famous quiz Who Wants To Be a Millionaire.

Slingo Originals has done an excellent job combining NetEnt’s mega-popular slot game with the Slingo concept. As a result, we have the Slingo Starburst slot game from which prizes of up to 1,500x the stake can be won. Achieving a Win Spin is not very hard, given the fact that this is a low to medium variance game. We believe you’ll have plenty of fun when playing this slot/bingo hybrid game and hopefully land a Full House.

Discover the Slingo Starburst slot by claiming a welcome offer from this page and play at top-notch online casinos.