BountyPop is a brand new online slot from Yggdrasil’s Masters Program, and this time, the developer is collaborating with AvatarUX. The BountyPop slot is the fourth game from the PopWins series. This five-reel game has all the PopWins features such as free spins, multipliers, and bonus wheels. In addition, it has a big winning potential, so you can end up winning up to 55,000x the stake, which is impressive. So, join the futuristic pirates in their adventure and do your best to trigger the bonus features and win the biggest prizes. If you want to learn more about this game, carry on reading our detailed BountyPop Slot Review. 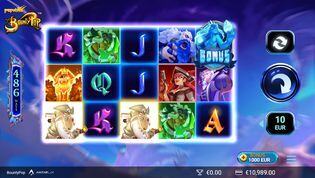 BountyPop is the fourth installation in the PopWins slot series. The provider has previously released three titles in this series - the last one that came out is the Cherrypop Slot. The BountyPop slot plays out on five reels and three rows and delivers winnings of up to 55,000x your stake. You can expand the grid up to six rows in the base game, and nine rows in the bonus round. Some of the highlights in this game include the Mystery Wheel and the Free Spins feature which show the game’s full potential. You’ll find the full details about this exciting game in our BountyPop Slot Review. Also, if you like what you see, you can play this game in both real-money and demo versions at one of the recommended casinos on the right side of this review.

Yggdrasil is back with another slot release from their Masters Program and it’s a new collaboration with Avatar UX. This game is called BountyPop and is one of the slots that have proven to be interesting for most of the players. BountyPop uses a win-all-ways system which means that winning combinations from left to right and from right to left are possible. This will give you 486 ways to win on a grid with five reels and three rows. However, since the BountyPop slot uses the PopWins mechanic, its reels can expand so you can end up with 59,049 ways to win.

BountyPop is the fourth online slot to feature the PopWins mechanic. Besides it and the Cherrypop slot that we’ve mentioned above, other games that are part of the series include the Wildpops slot and the PopRocks slot. PopWins is a slot mechanic where symbols are “popped” when you land a winning line and are replaced with new ones, expanding the size of the reels at the same time. The BountyPop slot is playable from £0.20 to £20 per spin, and you can easily adjust your ideal bet by pressing the left and right arrows on the right side of the reels.

When it comes to the rewards, this game is pretty impressive. If you manage to expand the reels to their full potential and get up to 59,049 paylines, you can win up to 55,000x your stake in a single spin. Moreover, the game comes with some exciting bonus features that we’ll explain in detail below, which include a Mystery Wheel, free spins, multipliers, and of course, expanding reels.

BountyPop has a pirate ship theme but is a lot more different than the usual pirate themes you’ve seen in online slots. This game has more futuristic vibes, which is typical for Yggdrasil, and the pirates are also designed in that way. The gameplay is based on the story about the seven seas where the sea gods and goddesses give players good fortunes across the five reels. Overall, the BountyPop slot has a high-class design with a simple blue background representing the seven seas. Each symbol triggers unique sounds and animations, while the bonuses are triggered by sounds that remind of a true pirate adventure.

The BountyPop slot’s Return to Player (RTP) is the industry average, being at 96%. The RTP represents the theoretical percentage of the money that the game will pay back to players over time. The hit frequency rate is 20% which means that you’ll create a winning combination on every fifth spin on average. On the other hand, the BountyPop slot is a high variance game so you might not land wins very frequently, but you’ll claim huge prizes whenever you win. The entire PopWins slot series is great if you want to play online slots with big payouts, and BountyPop is one of them. This game allows you to win up to 55,000x your stake, which is amazing.

Gameplay and Features on BountyPop Slot

What makes the BountyPop slot stand out among the crowd is the PopWins mechanic that it offers. The expanding reels that PopWins enables can add additional symbols to the reels as well as trigger the other bonus features. There is a Free Spins bonus feature, as well as a Mystery Wheel Multipliers feature and a Gamble Wheel feature offered to you before you start playing the free spins. So, let’s explain all features included in the BountyPop slots.

The PopWins feature has the main role in the BountyPop slot. When you land a winning combination on the reels, each winning symbol pops up to be replaced with two new symbols. This will increase the size of the reels and will increase the number of active paylines. In the base game, each reel can reach six symbols high and this will give you 7,776 ways to win. But, in the free spins round, the game can expand up to nine symbols high and this will give you 59,049 active paylines. The PopWins feature is active as long as you land winning combinations on the reels. When no more wins land, the reels will reset to their original size.

If you land at least three scatters in a single spin, you’ll gain access to the free spins bonus feature. Three, four and five scatters reward six, nine and 12 free spins respectively. The reels during the free spins can reach up to nine symbols high and the configuration is picked randomly. If you don’t score a win during a free spin, the reels won’t fully reset. Instead, they drop down by one position.

The Mystery Wheel Multipliers feature is one of the most impressive things about this game. It’s triggered when you get the maximum number of reels in the base game, which means that you have six symbols high on every reel. Then, you will be given a wheel that has multipliers of up to 5x in the outer ring, and up to 10x in the inner one. The multiplier will be used on all wins gained in that round.

Moreover, if you get seven, eight or nine symbols on the reels during the free spins feature, you’ll trigger another Mystery Wheel:

Just like the other online slots that are part of the PopWins series, so does the BountyPop slot is optimised to perfectly work on all mobile devices. It will load on any Android, iOS or Windows device that you have. Thanks to the HTML5 technology and the responsive design, you won’t face any issues when playing the BountyPop slot on mobile.

Yggdrasil has released plenty of online slots in the past few months, some of which have quickly gained the players’ attention. For example, some of the latest Yggdrasil slots is the Carol of the Elves slot which is the perfect game for the holidays. Another great game from Yggdrasil is the Rock The Cash Bar slot where you can end up with 16,807 active paylines. Or, you can check the Vikings go Bezerk slot, a game that really stands with its ground-breaking graphics and dynamic gameplay.

BountyPop is another impressive slot release from Yggdrasil which has a massive winning potential. With an average RTP and lots of bonus features, you’re guaranteed to have a great time. We are pleased that Yggdrasil and Avatar UX are expanding their PopWins slot series which is a great addition to the ever-growing list of new slot innovations. All in all, the BountyPop slot is a good-looking game so you can look forward to a top-notch gaming experience.

Discover the BountyPop slot by claiming a welcome offer right from this page and play at top-notch online casinos.

King of the West